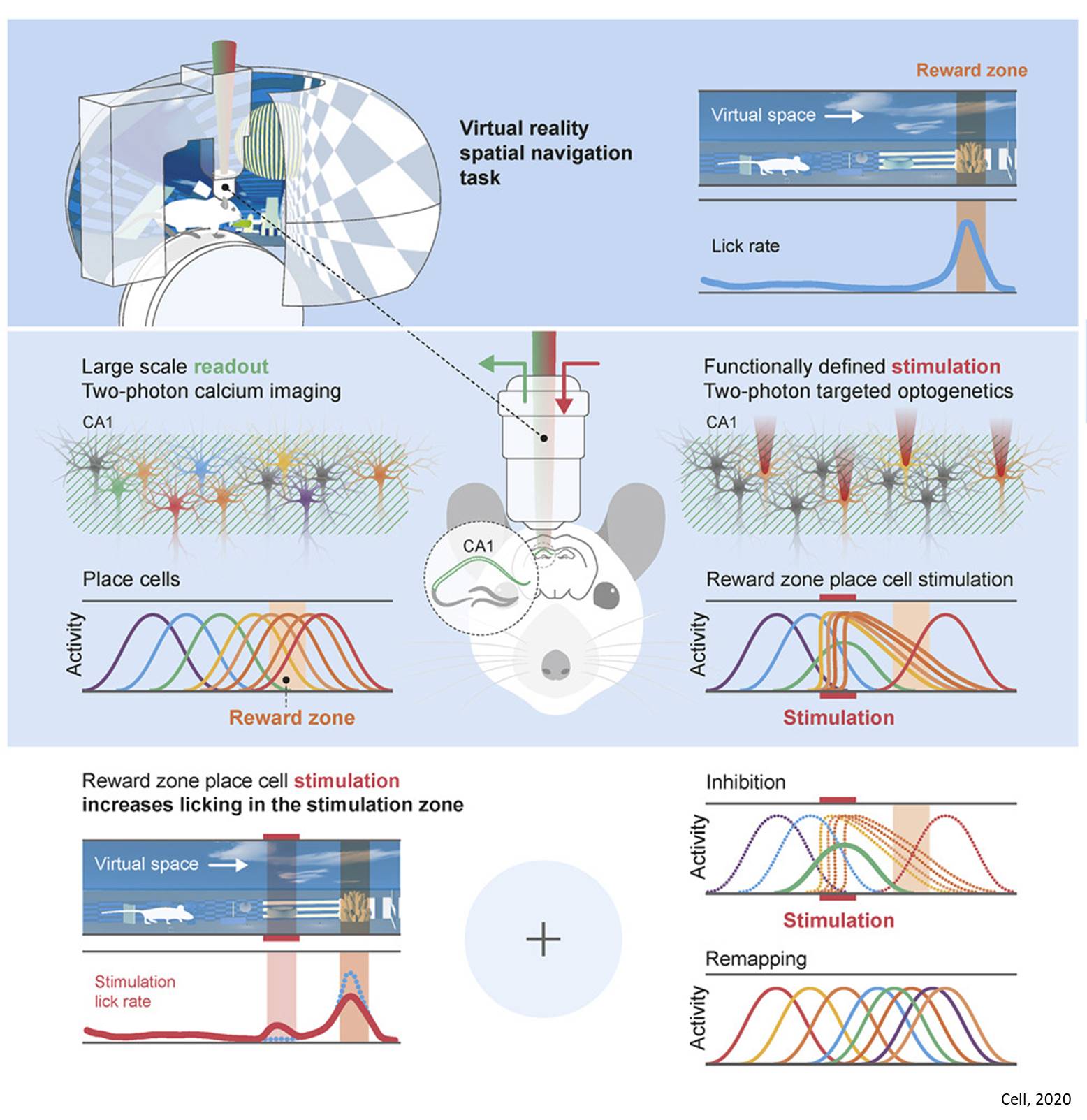 Neuroscientists have used laser beams to "switch on" neurons in mice, providing new insight into the hidden workings of memory and showing how memories underpin the brain's inner GPS system.

The study, published in the journal Cell, explains how researchers harnessed an 'all-optical' approach using twin lasers to simultaneously read and write the activity of 'place cells' (a type of neuron) in mice, as they navigated a virtual reality environment.

Remarkably, by stimulating the place cells, scientists were able to reactivate (or retrieve) the memory of a location where the mice obtained a reward, which in turn "mentally teleported" the mice, causing them to act as if they were in the rewarded place.

This new research builds on the groundbreaking work of Professor John O'Keefe (UCL Cell & Developmental Biology), who won the Nobel Prize in 2014 for discovering place cells. These cells are found in a brain region called the hippocampus, and only become active when an animal enters a specific location in the environment.

Place cells are thought to represent a cognitive map of the environment - like an inner GPS - and retain location memory. The new study is the first to show directly that place cell activity underlies the brain's ability to navigate.

The results provide a deeper understanding of how memories are stored, and the scientists believe the findings could eventually help us develop new therapies for conditions such as dementia and Alzheimer's disease, which affect memory.

First author said: "These results provide direct causal evidence that mice use the information represented by place cell activity to guide their behaviour. In other words, place cells really do tell the mouse where it is, and mice actually 'listen' to their place cells when they make decisions. This provides new insights about how memories are stored in the brain, as well as new tools for manipulating these memories to influence behavior."

The added: "Disorders of memory - such as in dementia and Alzheimer's - represent a huge cost to society. This work may eventually lead to a better understanding of these diseases, as well as new targets for therapeutic intervention."

Senior author said: "This study is a game-changer as it shows that we can use optical reading and writing of activity in specific neurons to manipulate memories, allowing us to better understand - and potentially improve - how neural circuit activity helps us to make decisions."

Researchers leveraged a powerful approach which combines two revolutionary technologies for using light to read and write electrical activity in the brain.

First, they engineered neurons to express genetically encoded calcium sensors, which allow cells to light up when they are active. Second, they expressed light-sensitive 'optogenetic' proteins in the same neurons, allowing them to activate specific cells with beams of laser light, targeted using digital holography (the same technology as used in a laser light show).

By combining these two techniques, the team could both record and manipulate activity in the same neurons in the brain of a mouse navigating in virtual reality.

The scientists used this approach to perform targeted activation of place cells in the hippocampus in mice navigating to a specific location within the virtual world to collect a sugar water reward. They first optically recorded the activity of large numbers of hippocampal place cells, identifying those which were active specifically at the rewarded location and which could therefore form the basis of the memory for that location. They then used holographically targeted laser beams to activate these specific place cells in a different location in the virtual world.

Remarkably, place cell stimulation was sufficient to retrieve the memory of the rewarded location, leading the mouse to seek the reward at the new location. In other words, the stimulation of the neurons with light "mentally teleports" the animal, causing them to act as if they were in the rewarded place. This is the first demonstration of how the activation of place cells enables us to retrieve memories of our environment and helps us to navigate.