Can our thoughts alter our brains? 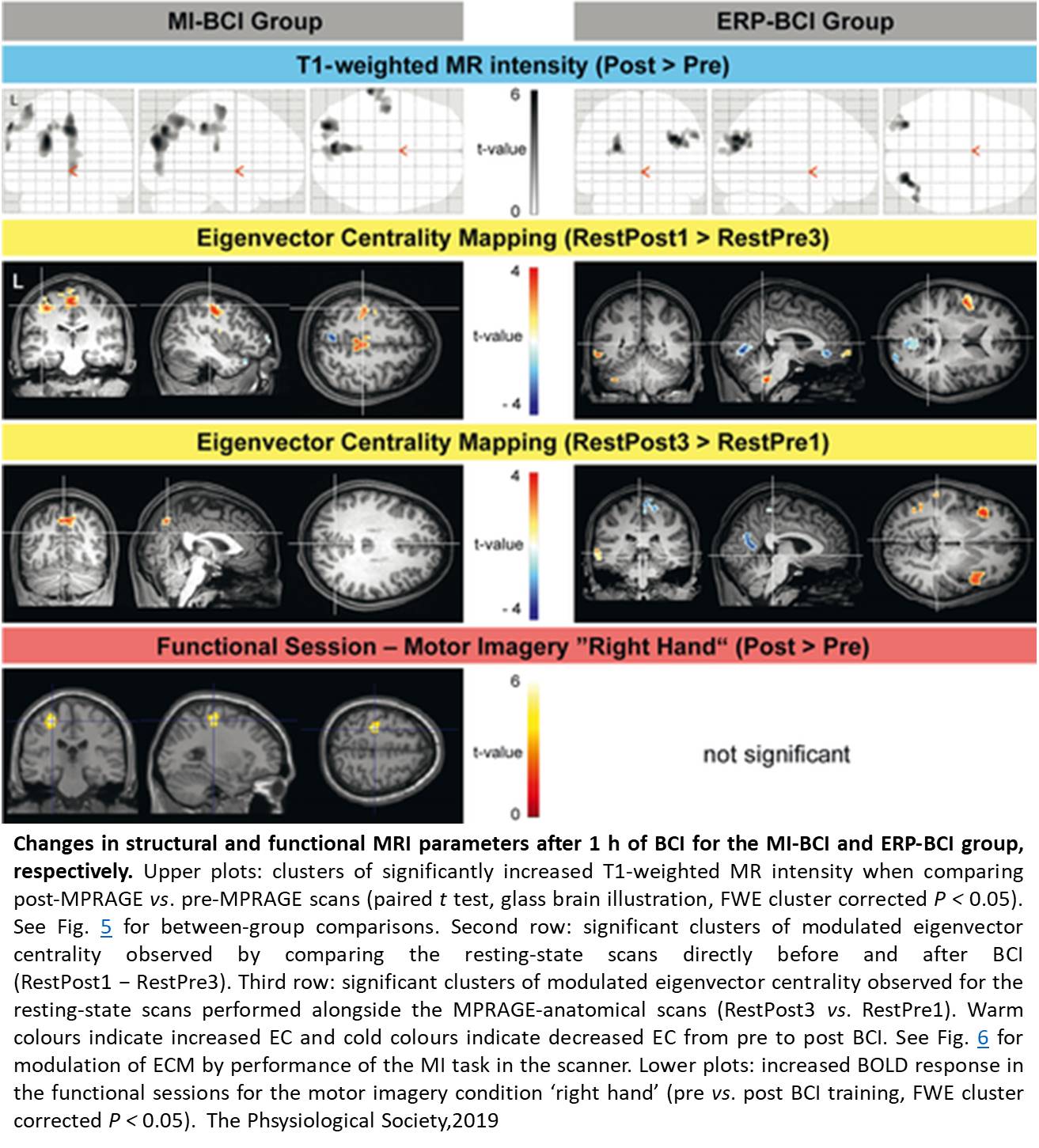 Brain-computer interfaces (BCI) work on the principle that measurable changes in electrical brain activity occur just by thinking about performing a task. Signals can be read by an EEG (electroencephalography), evaluated, and then converted into control signals via a machine learning system, which can then be used to operate a computer or a prosthesis. In a recently published study in the Journal of Physiology, researchers demonstrated that after just one hour’s training with a BCI significant changes could be detected in test subjects’ brains, meaning that training with the BCI also has direct repercussions on the neuronal structure and function of the brain.

The study examined the influence of two different types of BCI on the brains of test subjects with no prior experience of this technology. The first subgroup was given the task of imagining that they were moving their arms or feet, in other words a task requiring the use of the brain’s motor system. The task given to the second group addressed the brain’s visual center by requiring them to recognize and select letters on a screen.

Experience shows that test subjects achieve good results in visual tasks right from the outset and that further training does not improve these results, whereas addressing the brain’s motor system is much more complex and requires practice. In order to document potential changes, test subjects’ brains were examined before and after each BCI experiment using a special visualizing process – MRT (magnetic resonance tomography).

“We asked ourselves if these impacts on the brain’s plasticity would also occur in purely mental BCI experimental tasks, in other words if test subjects only think of a task without actually performing it,” says another author.

The results did indeed show measurable changes in precisely those regions of the brain specifically required to conduct the tasks. In other words, changes in the visual areas of the brain in test subjects given the visual task and changes in the motor area in test subjects who practiced imagining moving a part of their body. It is particularly worth noting that changes occurred within very short periods of time (one hour) using BCI, rather than weeks as is the case in physical training.

“It is still not clear if these changes would also occur if test subjects were not provided with feedback via the BCI system that their brain signals could be successfully read,” the author out. However the results do in general demonstrate that the effects of training with a brain-computer interface could have therapeutic benefits by stimulating specific regions of the brain.

“The spatial specificity of the impacts achieved with BCI could be used to target those areas of the brain affected by strokes,” explains another author. “Machine learning processes serve to decode or translate BCI activities into control signals,” adds the author. “This is the only way to convert individual BCI activities into control signals without lengthy training periods. This customized reading of the BCI will be decisive in determining whether the technology can be used in rehabilitation systems in the future."

Fat in feces points to early presence of colorectal cancer