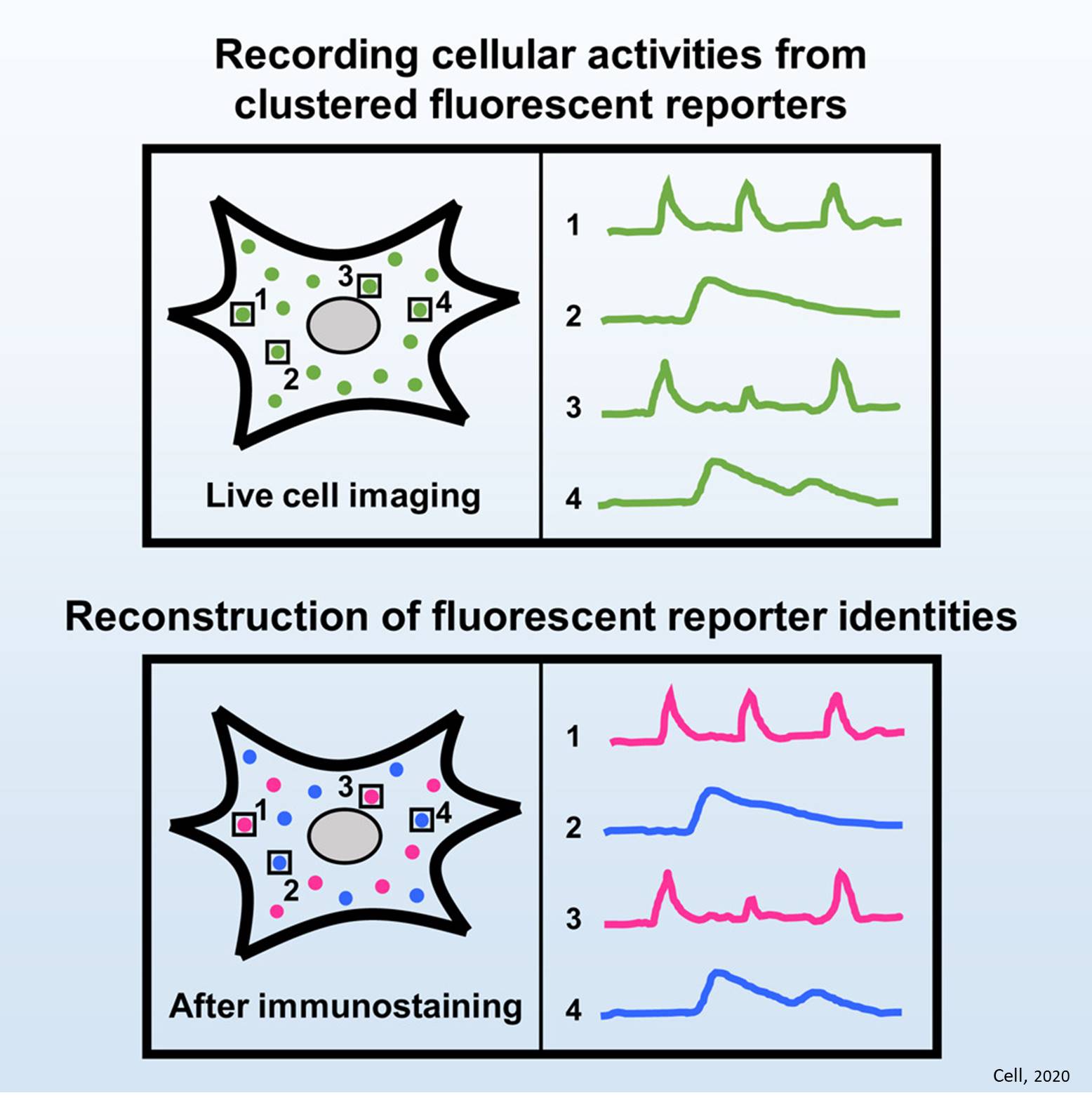 Within a single cell, thousands of molecules, such as proteins, ions, and other signaling molecules, work together to perform all kinds of functions -- absorbing nutrients, storing memories, and differentiating into specific tissues, among many others.

Deciphering these molecules, and all of their interactions, is a monumental task. Over the past 20 years, scientists have developed fluorescent reporters they can use to read out the dynamics of individual molecules within cells. However, typically only one or two such signals can be observed at a time, because a microscope cannot distinguish between many fluorescent colors.

The researchers have now developed a way to image up to five different molecule types at a time, by measuring each signal from random, distinct locations throughout a cell. This approach could allow scientists to learn much more about the complex signaling networks that control most cell functions, says the senior author.

"There are thousands of molecules encoded by the genome, and they're interacting in ways that we don't understand. Only by watching them at the same time can we understand their relationships," says the author.

In a new study, the authors used this technique to identify two populations of neurons that respond to calcium signals in different ways, which may influence how they encode long-term memories, the researchers say.

To make molecular activity visible within a cell, scientists typically create reporters by fusing a protein that senses a target molecule to a protein that glows. "This is similar to how a smoke detector will sense smoke and then flash a light," says the author. The most commonly used glowing protein is green fluorescent protein (GFP), which is based on a molecule originally found in a fluorescent jellyfish.

"Typically a biologist can see one or two colors at the same time on a microscope, and many of the reporters out there are green, because they're based on the green fluorescent protein," the author says. "What has been lacking until now is the ability to see more than a couple of these signals at once."

"Just like listening to the sound of a single instrument from an orchestra is far from enough to fully appreciate a symphony," the lead author says, "by enabling observations of multiple cellular signals at the same time, our technology will help us understand the 'symphony' of cellular activities."

To boost the number of signals they could see, the researchers set out to identify signals by location instead of by color. They modified existing reporters to cause them to accumulate in clusters at different locations within a cell. They did this by adding two small peptides to each reporter, which helped the reporters form distinct clusters within cells.

With this technique, each cell ends up with hundreds of clusters of fluorescent reporters. After measuring the activity of each cluster under a microscope, based on the changing fluorescence, the researchers can identify which molecule was being measured in each cluster by preserving the cell and staining for peptide tags that are unique to each reporter. The peptide tags are invisible in the live cell, but they can be stained and seen after the live imaging is done. This allows the researchers to distinguish signals for different molecules even though they may all be fluorescing the same color in the live cell.

Using this approach, the researchers showed that they could see five different molecular signals in a single cell. To demonstrate the potential usefulness of this strategy, they measured the activities of three molecules in parallel -- calcium, cyclic AMP, and protein kinase A (PKA). These molecules form a signaling network that is involved with many different cellular functions throughout the body. In neurons, it plays an important role in translating a short-term input (from upstream neurons) into long-term changes such as strengthening the connections between neurons -- a process that is necessary for learning and forming new memories.

The researchers now plan to try this approach in living animals so they can study how signaling network activities relate to behavior, and also to expand it to other types of cells, such as immune cells. This technique could also be useful for comparing signaling network patterns between cells from healthy and diseased tissue.

In this paper, the researchers showed they could record five different molecular signals at once, and by modifying their existing strategy, they believe they could get up to 16. With additional work, that number could reach into the hundreds, they say.

"That really might help crack open some of these tough questions about how the parts of a cell work together," the senior author says. "One might imagine an era when we can watch everything going on in a living cell, or at least the part involved with learning, or with disease, or with the treatment of a disease."