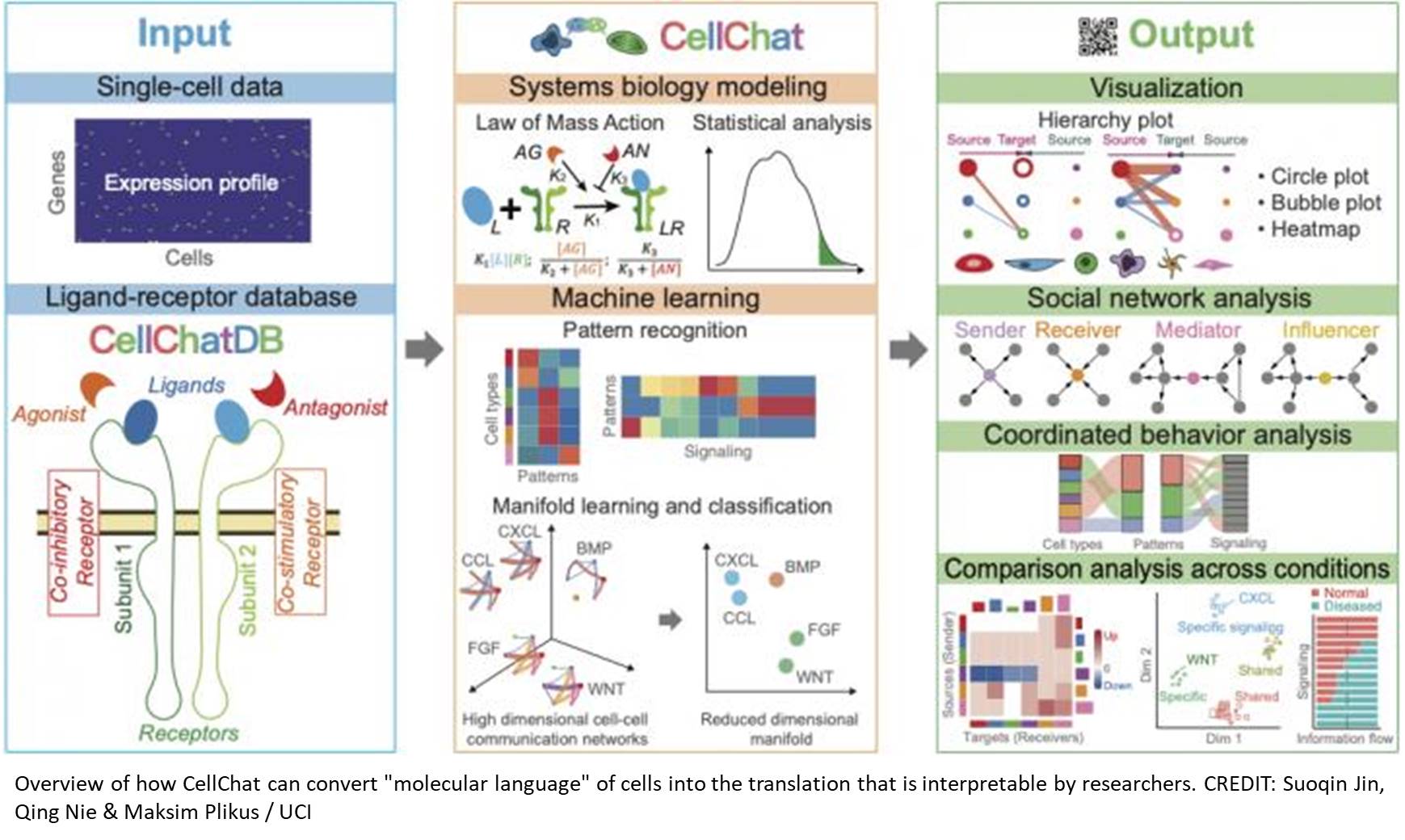 An interdisciplinary team of biologists and mathematicians has developed a new tool to help decipher the language cells use to communicate with one another.

In a paper published in Nature Communications, the researchers introduce CellChat, a computational platform that enables the decoding of signaling molecules that transmit information and commands between the cells that come together to form biological tissues and even entire organs.

"To properly understand why cells do certain things, and to predict their future actions, we need to be able to listen to what they are saying to one another; mathematical and machine learning tools enable the translation of such messages," said co-senior author.

"Just like in our world, where we are constantly bombarded with information, all cells experience a lot of molecular words coming at them simultaneously," added co-senior author, "What they choose to do is dependent on this steady flow of molecular information and on what words and sentences are being heard the loudest."

To use CellChat to translate molecular messages between cells, researchers feed in a single-cell gene expression, and out comes a detailed report on signaling communication features of a given tissue or organ.

"For each distinct group of cells, CellChat shows what significant signals are being sent to their neighbors and what signals they have the ability to receive," another senior co-author said. "As an interpreter of cellular language, CellChat provides scientists with a valuable insight into signaling patterns that guide function of the entire organ."

In developing CellChat, the researchers borrowed heavily from machine learning tools and social network theory, which allows the platform to predict a higher level meaning of cellular language and identify contextual similarities that are otherwise not obvious. It breaks down the immense complexity of cellular communication patterns.

Cells produce modifier molecules to add emphasis to a certain command, transforming "do this" to "do this now." CellChat automatically calibrates the strength of signaling communication between cells by considering all significantly present modifier molecules. As a result, its translation becomes more nuanced and helps to minimize inaccuracies that plague other similar yet less sophisticated computational tools.

Beyond the purely fundamental research enterprise of interpreting these biological messages, co-senior author said CellChat can also be used to compare communication networks in different states of an organ, such as sickness and health. Calling it a "Google Translator for the lexicon of cells," the author said one of tool's most significant capabilities is that it can be used to uncover molecular drivers in a broad spectrum of maladies including cancer and autoimmune disorders.

"In our paper, we showcase the power of CellChat using atopic dermatitis, a human skin condition, but the tool can be used on any tissue with the same success," the other co-senior author added.