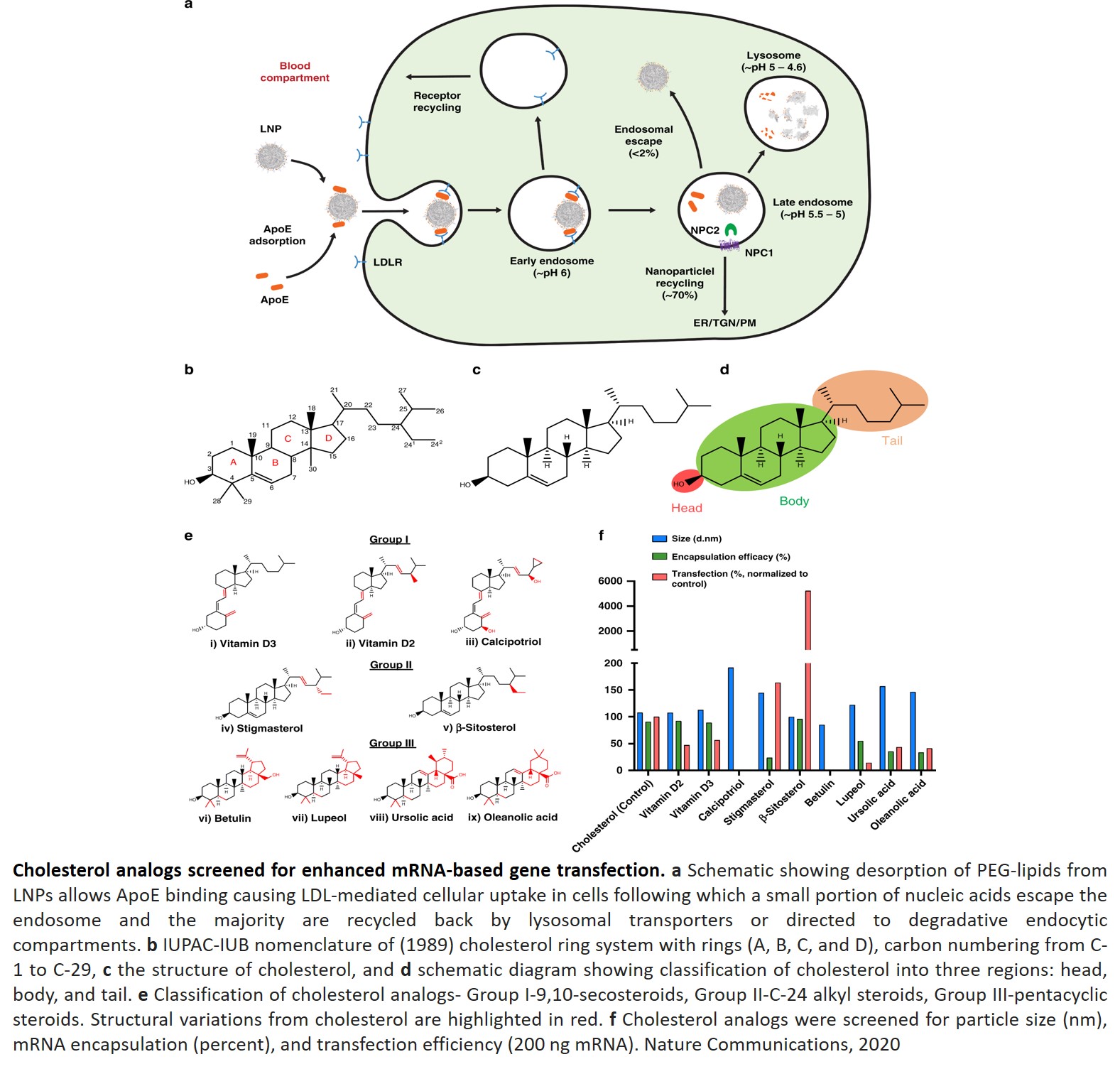 Gene-infused nanoparticles used for combating disease work better when they include plant-based relatives of cholesterol because their shape and structure help the genes get where they need to be inside cells.

The findings published in Nature Communications, are important because many illnesses that can't be treated effectively with conventional drugs can be treated genetically - delivering nucleic acids to diseased cells so they can make the correct proteins needed for health.

Those genetic treatments rely on the transport devices reaching their destination with a high success rate and releasing their cargo effectively.

The researchers study lipid-based nanoparticles as a gene delivery vehicle, with a focus on cystic fibrosis. Cystic fibrosis is a progressive genetic disorder that results in persistent lung infection and afflicts 30,000 people in the U.S., with about 1,000 new cases diagnosed every year.

More than three-quarters of patients are diagnosed by age 2, and despite steady advances in alleviating complications, the median life expectancy of cystic fibrosis patients is still just 40 years.

One faulty gene - the cystic fibrosis transmembrane conductance regulator, or CFTR - causes the disease, which is characterized by lung dehydration and mucous buildup that blocks the airway.

Cholesterol, a waxy substance the body uses to make healthy cells, is thought to provide stability in these gene nanocarriers. In the latest study, the authors boosted gene delivery by using plant-based analogs of cholesterol instead. Another plus of these plant-derived sterols is a cardiovascular health benefit.

The type of nanoparticle used to deliver genes in this study has already been clinically approved; it's being used in a drug, trade-named Onpattro, given to patients with a progressive genetic condition called amyloidosis, which disrupts organ function through harmful deposits of the amyloid protein.

The authors, found that phytosterols - plant-based molecules chemically similar to cholesterol - change the shape of the nanoparticles from spherical to polyhedral and cause them move faster.

That's important because once inside a cell, the nanoparticles need maneuverability for the escape they need to make: from a cell compartment known as an endosome into the cytosol, where the delivered genes can perform their intended function.

"One of the biggest challenges in the delivery of genes is that less than 2% of the nanoparticles reach the cytosol," said the senior author. "If you up the dose to get more genes there, now you have problems with toxicity, plus the cost goes higher. But the nanoparticles' shape changes because of these naturally occurring cholesterol analogs, and the new shape helps them deliver genes better. The analogs boost gene delivery 10-fold and sometimes 200-fold."

The finding can be used to make inhalable particles that can cross several barriers in the lung in a cystic fibrosis patient, enabling patients to be treated with much higher efficacy, Sahay added.

"In this latest research, we hypothesized that with the analog inclusions, there would be shape changes and changes with how the nanoparticles interact with the cell and how the cell perceives them," the author said. "For instance, the sterols might help them get to the ribosomes for translation faster. This opens up a whole new area of research - the shape and structure and composition of the liquid nanoparticles now become quite relevant. We're just scratching the surface on the way to building LNPs with a rational design to get different properties for treating different diseases with cell-type specificity."