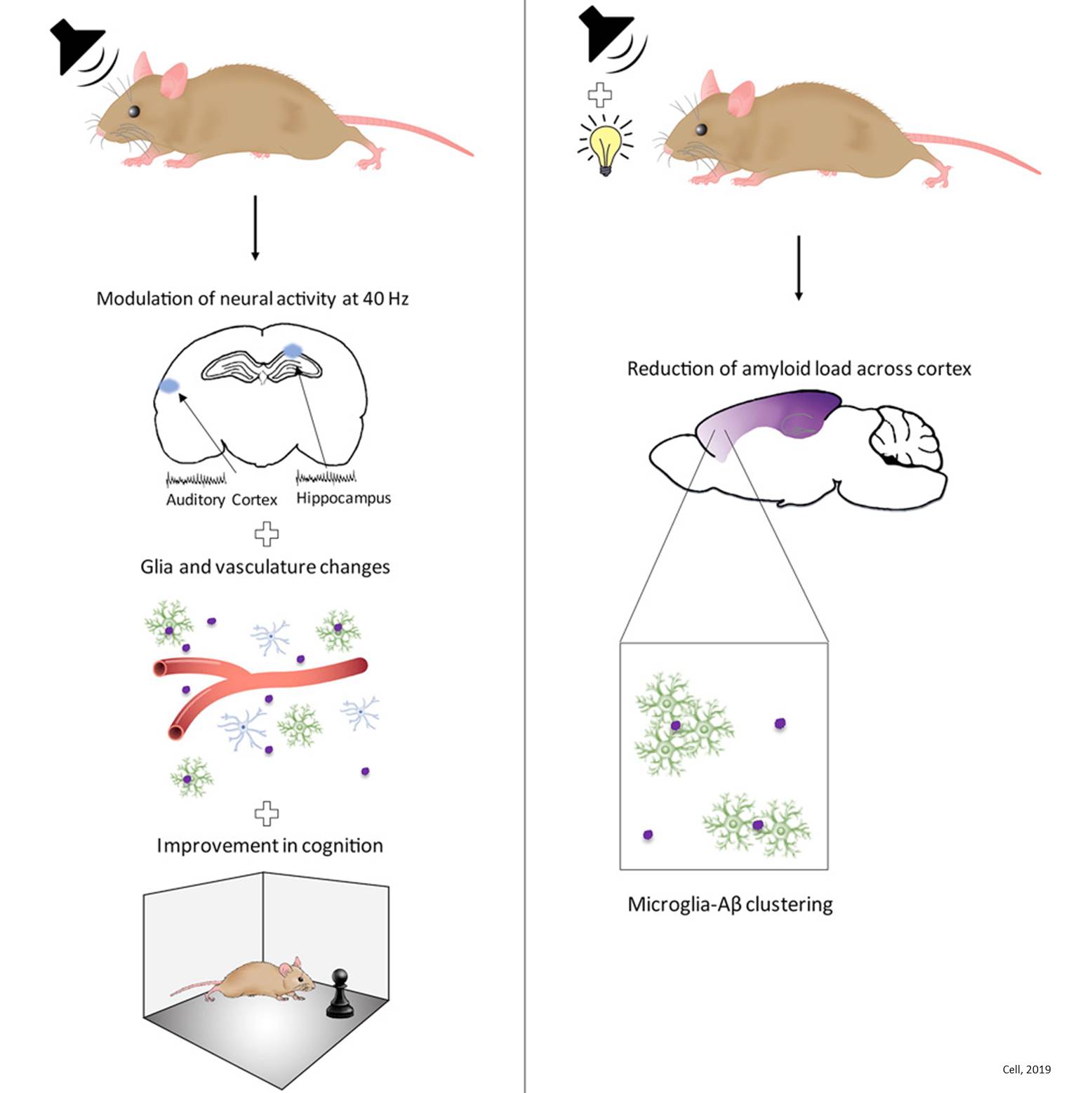 By exposing mice to a unique combination of light and sound, neuroscientists have shown that they can improve cognitive and memory impairments similar to those seen in Alzheimer's patients.

This noninvasive treatment, which works by inducing brain waves known as gamma oscillations, also greatly reduced the number of amyloid plaques found in the brains of these mice. Plaques were cleared in large swaths of the brain, including areas critical for cognitive functions such as learning and memory.

"When we combine visual and auditory stimulation for a week, we see the engagement of the prefrontal cortex and a very dramatic reduction of amyloid," says the senior author of the study.

Further study will be needed to determine if this type of treatment will work in human patients. The researchers have already performed some preliminary safety tests of this type of stimulation in healthy human subjects. The study appears in the journal Cell.

The brain's neurons generate electrical signals that synchronize to form brain waves in several different frequency ranges. Previous studies have suggested that Alzheimer's patients have impairments of their gamma-frequency oscillations, which range from 25 to 80 hertz (cycles per second) and are believed to contribute to brain functions such as attention, perception, and memory.

In 2016, the authors first reported the beneficial effects of restoring gamma oscillations in the brains of mice that are genetically predisposed to develop Alzheimer's symptoms. In that study, the researchers used light flickering at 40 hertz, delivered for one hour a day. They found that this treatment reduced levels of beta amyloid plaques and another Alzheimer's-related pathogenic marker, phosphorylated tau protein. The treatment also stimulated the activity of debris-clearing immune cells known as microglia.

In that study, the improvements generated by flickering light were limited to the visual cortex. In their new study, the researchers set out to explore whether they could reach other brain regions, such as those needed for learning and memory, using sound stimuli. They found that exposure to one hour of 40-hertz tones per day, for seven days, dramatically reduced the amount of beta amyloid in the auditory cortex (which processes sound) as well as the hippocampus, a key memory site that is located near the auditory cortex.

"What we have demonstrated here is that we can use a totally different sensory modality to induce gamma oscillations in the brain. And secondly, this auditory-stimulation-induced gamma can reduce amyloid and Tau pathology in not just the sensory cortex but also in the hippocampus," says the senior author.

The researchers also tested the effect of auditory stimulation on the mice's cognitive abilities. They found that after one week of treatment, the mice performed much better when navigating a maze requiring them to remember key landmarks. They were also better able to recognize objects they had previously encountered.

They also found that auditory treatment induced changes in not only microglia, but also the blood vessels, possibly facilitating the clearance of amyloid.

The researchers then decided to try combining the visual and auditory stimulation, and to their surprise, they found that this dual treatment had an even greater effect than either one alone. Amyloid plaques were reduced throughout a much greater portion of the brain, including the prefrontal cortex, where higher cognitive functions take place. The microglia response was also much stronger.

"These microglia just pile on top of one another around the plaques," the senior author says. "It's very dramatic."

The researchers found that if they treated the mice for one week, then waited another week to perform the tests, many of the positive effects had faded, suggesting that the treatment would need to be given continually to maintain the benefits.

In an ongoing study, the researchers are now analyzing how gamma oscillations affect specific brain cell types, in hopes of discovering the molecular mechanisms behind the phenomena they have observed. The senior author says she also hopes to explore why the specific frequency they use, 40 hertz, has such a profound impact.

The combined visual and auditory treatment has already been tested in healthy volunteers, to assess its safety, and the researchers are now beginning to enroll patients with early-stage Alzheimer's to study its possible effects on the disease.