Controlling the mind with electronics! 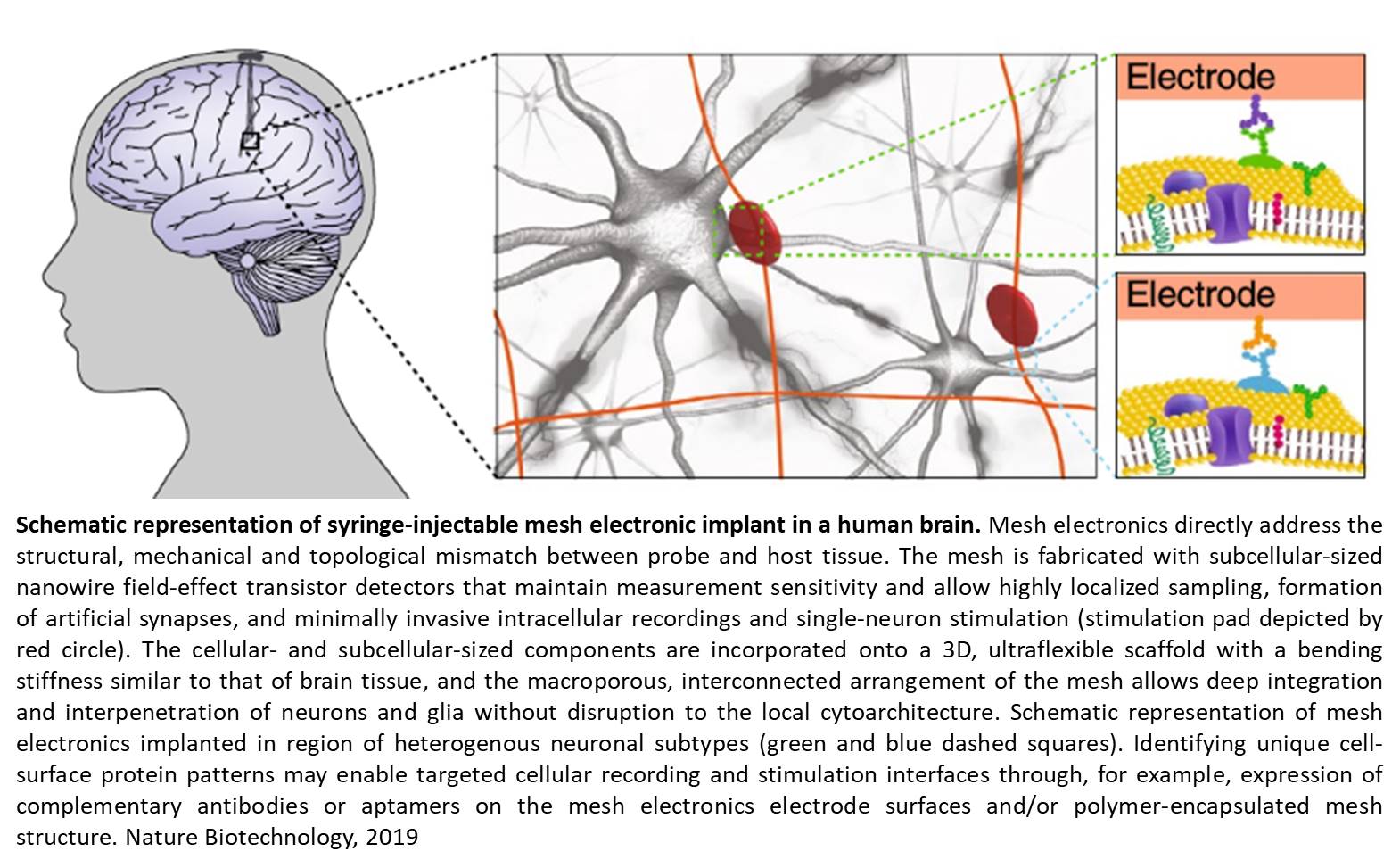 Electrodes implanted in the brain help alleviate symptoms like the intrusive tremors associated with Parkinson's disease. But current probes face limitations due to their size and inflexibility. "The brain is squishy and these implants are rigid," said the author.

In a recent perspective titled "Precision Electronic Medicine," published in Nature Biotechnology, the authors argue that neurotechnology is on the cusp of a major renaissance. Throughout history, scientists have blurred discipline lines to tackle problems larger than their individual fields. The Human Genome Project, for example, convened international teams of scientists to map human genes faster than otherwise possible.

"The next frontier is really the merging of human cognition with machines," the author said. They see mesh electronics as the foundation for those machines, a way to design personalized electronic treatment for just about anything related to the brain.

"Everything manifests in the brain fundamentally. Everything. All your thoughts, your perceptions, any type of disease," the author said.

Scientists can pinpoint the general areas of the brain where decision-making, learning, and emotions originate, but tracing behaviors to specific neurons is still a challenge. Right now, when the brain's complex circuitry starts to misbehave or degrade due to psychiatric illnesses like addiction or Obsessive-Compulsive Disorder, neurodegenerative diseases like Parkinson's or Alzheimer's, or even natural aging, patients have only two options for medical intervention: drugs or, when those fail, implanted electrodes.

Drugs like L-dopa can quiet the tremors that prevent someone with Parkinson's from performing simple tasks like dressing and eating. But because drugs affect more than just their target, even common L-dopa side effects can be severe, ranging from nausea to depression to abnormal heart rhythms.

When drugs no longer work, FDA-approved electrodes can provide relief through Deep Brain Stimulation. Like a pace maker, a battery pack set beneath the clavicle sends automated electrical pulses to two brain implants. Lieber said each electrode "looks like a pencil. It's big."

During implantation, Parkinson's patients are awake, so surgeons can calibrate the electrical pulses. Dial the electricity up, and the tremors calm. "Almost instantly, you can see the person regain control of their limbs," Patel said. "It blows my mind."

But, like with L-dopa, the large electrodes stimulate more than their intended targets, causing sometimes severe side effects like speech impediments. And, over time, the brain's immune system treats the stiff implants as foreign objects: Neural immune cells (glia cells) engulf the perceived invader, displacing or even killing neurons and reducing the device's ability to maintain treatment.

In contrast, Lieber's mesh electronics provoke almost no immune response. With close, long-term proximity to the same neurons, the implants can collect robust data on how individual neurons communicate over time or, in the case of neurological disorders, fail to communicate. Eventually, such technology could track how specific neural subtypes talk, too, all of which could lead to a cleaner, more precise map of the brain's communication network.

With higher resolution targets, future electrodes can act with greater precision, eliminating unwanted side effects. If that happens, they could be tuned to treat any neurological disorder. And, unlike current electrodes, Lieber's have already demonstrated a valuable trick of their own: They encourage neural migration, potentially guiding newborn neurons to damaged areas, like pockets created by stroke.

"The potential for it is outstanding," the author said. "In my own mind, I see this at the level of what started with the transistor or telecommunications."

The potential reaches beyond therapeutics: Adaptive electrodes could provide heightened control over prosthetic or even paralyzed limbs. In time, they could act like neural substitutes, replacing damaged circuitry to re-establish broken communication networks and recalibrate based on live feedback. "If you could actually interact in a precise and long-term way and also provide feedback information," the other author said, "you could really communicate with the brain in the same way that the brain is communicating within itself."

A few major technology companies are also eager to champion brain-machine interfaces. Some, like Elon Musk's Neuralink, which plans to give paralyzed patients the power to work computers with their minds, are focused on assistive applications. Others have broader plans: Facebook wants people to text by imaging the words, and Brian Johnson's Kernel hopes to enhance cognitive abilities.

During his postdoctoral studies, the author saw how just a short pulse of electricity--no more than 500 milliseconds of stimulation--could control a person's ability to make a safe or impulsive decision. After a little zap, subjects who almost always chose the risky bet, instead went with the safe option. "You would have no idea that it's happened," the author said. "You're unaware of it. It's beyond your conscious awareness."

Such power demands intense ethical scrutiny. For people struggling to combat addiction or obsessive-compulsive disorder, an external pulse regulator could significantly improve their quality of life. But, companies that operate those regulators could access their client's most personal data--their thoughts. And, if enhanced learning and memory are for sale, who gets to buy a better brain? "One does need to be a little careful about the ethics involved if you're trying to make a superhuman," the other suthor said. "Being able to help people is much more important to me at this time."

Mesh electronics still have several major challenges to overcome: scaling up the number of implanted electrodes, processing the data flood those implants deliver, and feeding that information back into the system to enable live recalibration.

"I always joke in talks that I'm doing this because my memory has gotten a little worse than it used to be," the other author said. "That's natural aging. But does it have to be that way? What if you could correct it?" If the authors succeed in galvanizing researchers around mesh electronics, the question might not be if but when.