CRISPR barcoding of cells to track an organism's development 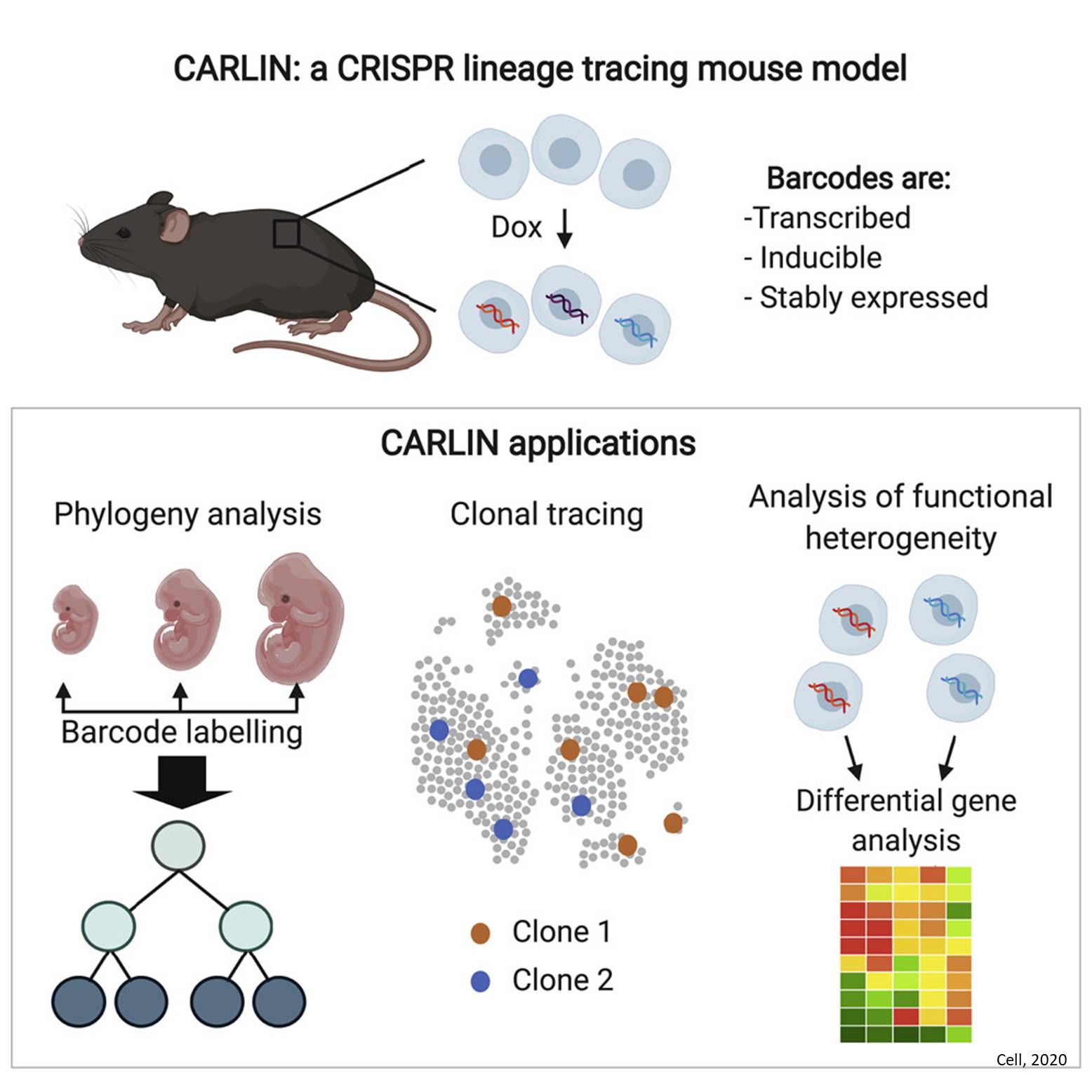 Scientists have devised a mouse model that lets researchers track every cell in the body, from the embryonic stage until adulthood. Using a "barcoding" technique and CRISPR gene editing technology, the model can identify different cell types as they emerge and what genes each is turning on. Described in the journal Cell, the system is the first of its kind and should yield a greater understanding of development, aging, and disease.

"The dream that many developmental biologists have had for decades is a way to reconstruct every single cell lineage, cell-by-cell, as an embryo develops, or as a tissue is built up," says  the co-senior author on the paper. "We could use this mouse model to follow its entire development."

The authors created the mouse model using a method they call CRISPR Array Repair Lineage tracing, or CARLIN. The model can reveal cell lineages -- the "family tree" in which parent cells create different types of daughter cells -- as well as what genes are turned on or off in every cell over time.

Previously, scientists have only been able to trace small groups of cells in mice using dyes or fluorescent markers. Tags or barcodes have also been used, but previous approaches required prior knowledge of markers to isolate different cell types, or required time-consuming extraction and manipulation of cells, which could affect their properties. The advent of CRISPR has enabled researchers to barcode cells without perturbing the cells and to follow the lineage of thousands of cells simultaneously.

Using an inducible form of CRISPR, the researchers can create up to 44,000 different identifying barcodes at any time point in a mouse's lifespan. The scientists can then read out the barcodes using another technology called single cell RNA sequencing, enabling collection of information on thousands of genes that are turned on in each barcoded cell. This, in turn, provides information about the cells' identity and function.

As a test case, the researchers used the new system to reveal unknown aspects of blood development during embryonic development, and to observe the dynamics of blood replenishment after chemotherapy in adult mice.

But the researchers believe their system could also be used to understand the changes in cellular lineage trees during disease and aging. Additionally, the system could be used to record the response to environmental stimuli like pathogen exposure and nutrient intake.

"Being able to create single-cell lineage maps of mammalian tissues is unprecedented," says the co-senior author. "Besides its many applications to studying developmental biology, our model will provide important insight on the cell types and hierarchies that are affected as organisms respond to injury and disease."