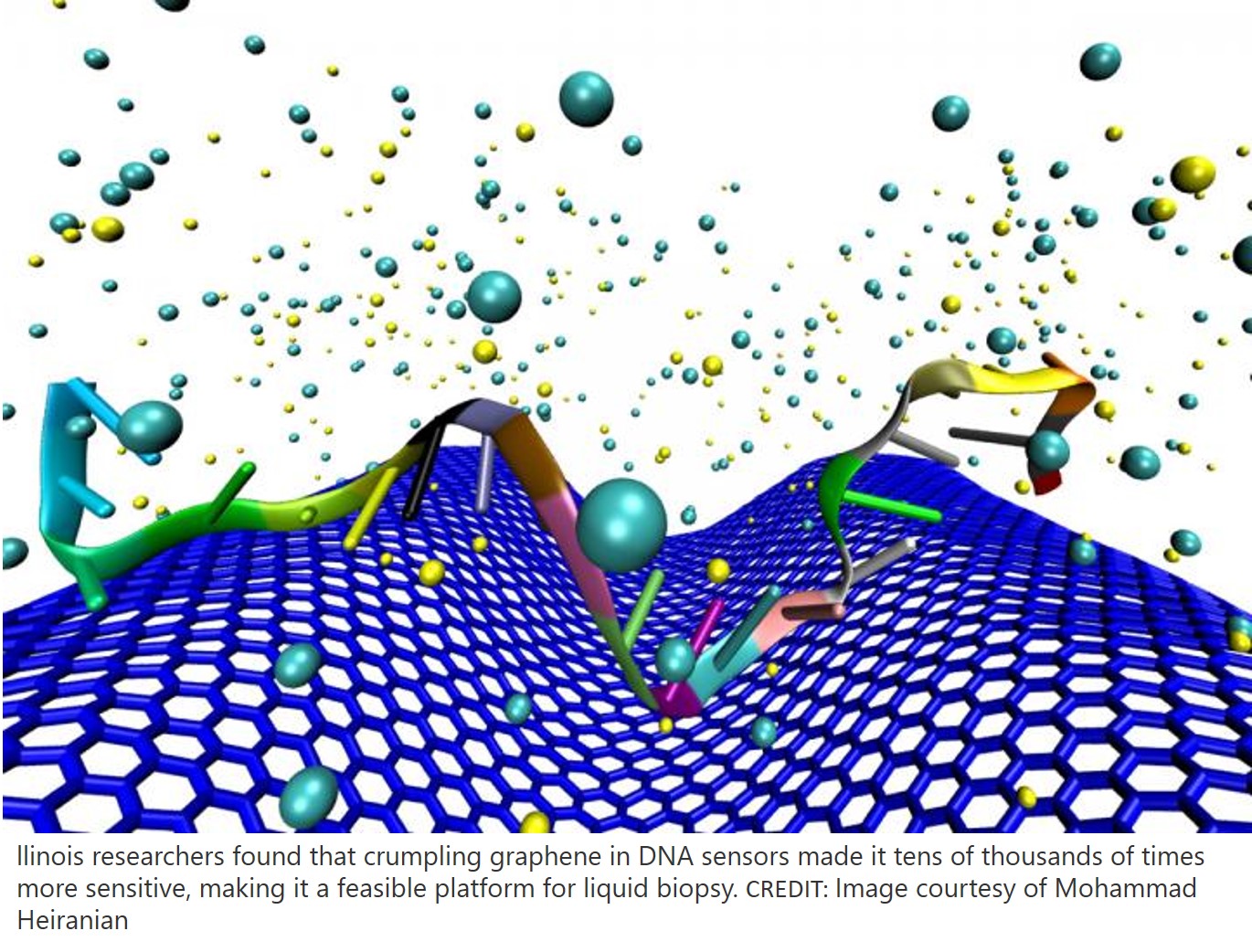 Graphene-based biosensors could usher in an era of liquid biopsy, detecting DNA cancer markers circulating in a patient's blood or serum. But current designs need a lot of DNA. In a new study, crumpling graphene makes it more than ten thousand times more sensitive to DNA by creating electrical "hot spots," researchers found.

Crumpled graphene could be used in a wide array of biosensing applications for rapid diagnosis, the researchers said. They published their results in the journal Nature Communications.

"This sensor can detect ultra-low concentrations of molecules that are markers of disease, which is important for early diagnosis," said study leader. "It's very sensitive, it's low-cost, it's easy to use, and it's using graphene in a new way."

While the idea of looking for telltale cancer sequences in nucleic acids, such as DNA or its cousin RNA, isn't new, this is the first electronic sensor to detect very small amounts, such as might be found in a patient's serum, without additional processing.

"When you have cancer, certain sequences are overexpressed. But rather than sequencing someone's DNA, which takes a lot of time and money, we can detect those specific segments that are cancer biomarkers in DNA and RNA that are secreted from the tumors into the blood," said the first author of the study.

Graphene - a flat sheet of carbon one atom thick - is a popular, low-cost material for electronic sensors. However, nucleic-acid sensors developed so far require a process called amplification - isolating a DNA or RNA fragment and copying it many times in a test tube. This process is lengthy and can introduce errors. So the group set out to increase graphene's sensing power to the point of being able to test a sample without first amplifying the DNA.

Many other approaches to boosting graphene's electronic properties have involved carefully crafted nanoscale structures. Rather than fabricate special structures, the group simply stretched out a thin sheet of plastic, laid the graphene on top of it, then released the tension in the plastic, causing the graphene to scrunch up and form a crumpled surface.

They tested the crumpled graphene's ability to sense DNA and a cancer-related microRNA in both a buffer solution and in undiluted human serum, and saw the performance improve tens of thousands of times over flat graphene.

"This is the highest sensitivity ever reported for electrical detection of a biomolecule. Before, we would need tens of thousands of molecules in a sample to detect it. With this device, we could detect a signal with only a few molecules," the author said. "I expected to see some improvement in sensitivity, but not like this."

To determine the reason for this boost in sensing power, the group used detailed computer simulations to study the crumpled graphene's electrical properties and how DNA physically interacted with the sensor's surface.

They found that the cavities served as electrical hotspots, acting as a trap to attract and hold the DNA and RNA molecules.

In addition, crumpling the graphene created a strain in the material that changed its electrical properties, inducing a bandgap - an energy barrier that electrons must overcome to flow through the material - that made it more sensitive to the electrical charges on the DNA and RNA molecules.

"This bandgap potential shows that crumpled graphene could be used for other applications as well, such as nano circuits, diodes or flexible electronics," said a coauthor of the paper.

Even though DNA was used in the first demonstration of crumpled graphene's sensitivity for biological molecules, the new sensor could be tuned to detect a wide variety of target biomarkers. The group is testing crumpled graphene in sensors for proteins and small molecules as well.

"Eventually the goal would be to build cartridges for a handheld device that would detect target molecules in a few drops of blood, for example, in the way that blood sugar is monitored," the senior author said. "The vision is to have measurements quickly and in a portable format."