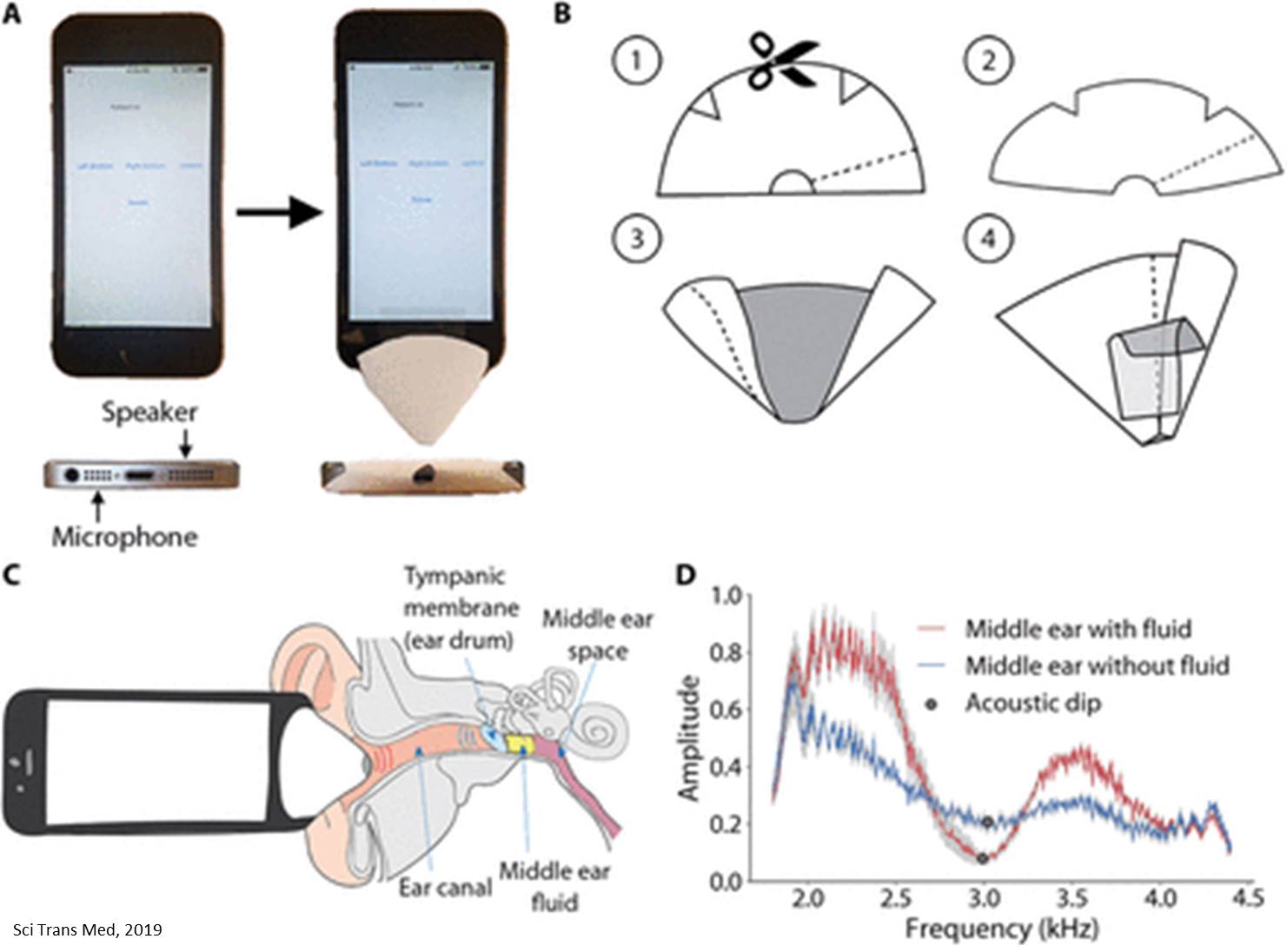 Ear infections are the most common reason that parents bring their children to a pediatrician, according to the National Institutes of Health.

This condition occurs when fluid builds up in the middle ear behind the eardrum and is infected. This buildup is also common in another condition called otitis media with effusion. Any kind of fluid buildup can be painful and make it hard for children to hear, which can be especially detrimental when they are learning to talk. Both conditions are hard to diagnose because they have vague symptoms: Sometimes children tug on their ears or have fevers, and sometimes there are no symptoms. In addition, young children may not be able to describe where they hurt.

Now researchers have created a new smartphone app that can detect fluid behind the eardrum by simply using a piece of paper and a smartphone's microphone and speaker. The smartphone makes a series of soft audible chirps into the ear through a small paper funnel and, depending on the way the chirps are reflected back to the phone, the app determines the likelihood of fluid present with a probability of detection of 85%. This is on par with current methods used by specialists to detect fluid in the middle ear, which involve specialized tools that use acoustics or a puff of air. The team published its results in Science Translational Medicine.

"Designing an accurate screening tool on something as ubiquitous as a smartphone can be game changing for parents as well as health care providers in resource limited regions," said co-author. "A key advantage of our technology is that it does not require any additional hardware other than a piece of paper and a software app running on the smartphone." Once diagnosed, ear infections can be easily treated with observation or antibiotics, and persistent fluid can be monitored or drained by a doctor to relieve symptoms of pain or hearing loss. A quick screening at home could help parents decide whether or not they need to take their child to the doctor.

This app works by sending sounds into the ear and measuring how those sound waves change as they bounce off the eardrum. The team's system involves a smartphone and a regular piece of paper that the doctor or parent can cut and fold into a funnel. The funnel rests on the outer ear and guides sound waves in and out of the ear canal. When the phone plays a continuous 150 millisecond sound -- which sounds like a bird chirping -- through the funnel, the sound waves bounce off the eardrum, travel back through the funnel and are picked up by the smartphone's microphone along with the original chirps. Depending on whether there's fluid inside, the reflected sound waves interfere with the original chirp sound waves differently.

"It's like tapping a wine glass," said co-first author. "Depending on how much liquid is in it, you get different sounds. Using machine learning on these sounds, we can detect the presence of liquid."

To train an algorithm that detects changes in the signal and classifies ears as having fluid or not, the team tested 53 children between the ages of 18 months and 17 years at Seattle Children's Hospital. About half of the children were scheduled to undergo surgery for ear tube placement, a common surgery for patients with chronic or recurrent incidents of ear fluid. The other half were scheduled to undergo a different surgery unrelated to ears, such as a tonsillectomy.

"What is really unique about this study is that we used the gold standard for diagnosing ear infections," said another co-first author. "When we put in ear tubes, we make an incision into the eardrum and drain any fluid present. That's the best way to tell if there is fluid behind the eardrum. So these surgeries created the ideal setting for this study."

After parents provided informed consent, the team recorded the chirps and their resulting sound waves from the patients' ears immediately before surgery. Many of the children responded to the chirps by smiling or laughing. Among the children getting their ear tubes placed, surgery revealed that 24 ears had fluid behind the eardrum, while 24 ears did not. For children scheduled for other surgeries, two ears had bulging eardrums characteristic of an ear infection, while the other 48 ears were fine. The algorithm correctly identified the likelihood of fluid 85% of the time, which is comparable to current methods that specialized doctors use to diagnose fluid in the inner ear.

Then the team tested the algorithm on 15 ears belonging to younger children between nine and 18 months of age. It correctly classified all five ears that were positive for fluid and nine out of the 10 ears, or 90%, that did not have fluid. "Even though our algorithm was trained on older kids, it still works well for this age group," said another co-author. "This is critical because this group has a high incidence of ear infections."

Because the researchers want parents to be able to use this technology at home, the team trained parents how to use the system on their own children. Parents and doctors folded paper funnels, tested 25 ears and compared the results. Both parents and doctors successfully detected the six fluid-filled ears. Parents and doctors also agreed on 18 out of the 19 ears with no fluid. In addition, the sound wave curves generated by both parent and doctor tests looked similar.

"The ability to know how often and for how long fluid has been present could help us make the best management decisions with patients and parents," the author said. "It also could help primary care providers know when to refer to a specialist."

The team also tested the algorithm on a variety of smartphones and used different types of paper to make the funnel. The results were consistent regardless of phone or paper type. The researchers plan on commercializing this technology through a spinout company, Edus Health, and then making the app available to the public.

"Fluid behind the eardrum is so common in children that there's a direct need for an accessible and accurate screening tool that can be used at home or clinical settings," co-author said. "If parents could use a piece of hardware they already have to do a quick physical exam that can say 'Your child most likely doesn't have ear fluid' or 'Your child likely has ear fluid, you should make an appointment with your pediatrician,' that would be huge."