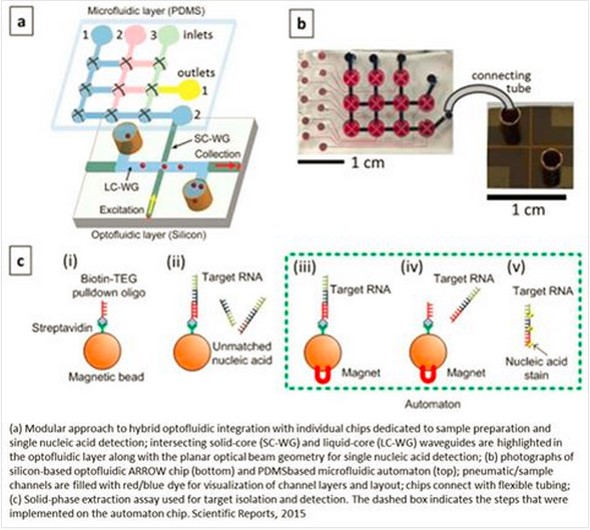 The current gold standard for Ebola virus detection relies on a method called polymerase chain reaction (PCR) to amplify the virus's genetic material for detection. Because PCR works on DNA molecules and Ebola is an RNA virus, the reverse transcriptase enzyme is used to make DNA copies of the viral RNA prior to PCR amplification and detection.

A team led by researchers has developed chip-based technology for reliable detection of Ebola virus and other viral pathogens. The system uses direct optical detection of viral molecules and can be integrated into a simple, portable instrument for use in field situations where rapid, accurate detection of Ebola infections is needed to control outbreaks.

In laboratory tests, the system provided sensitive detection of Ebola virus while giving no positive counts in tests with two related viruses, Sudan virus and Marburg virus. Testing with different concentrations of Ebola virus demonstrated accurate quantification of the virus over six orders of magnitude.

The team has not yet been able to test the system starting with raw blood samples. That will require additional sample preparation steps, and it will also have to be done in a biosafety level 4 facility.

The team reported their results in a paper published in Nature Scientific Reports. Use of mathematics to learn signaling in healthy and cancer cells