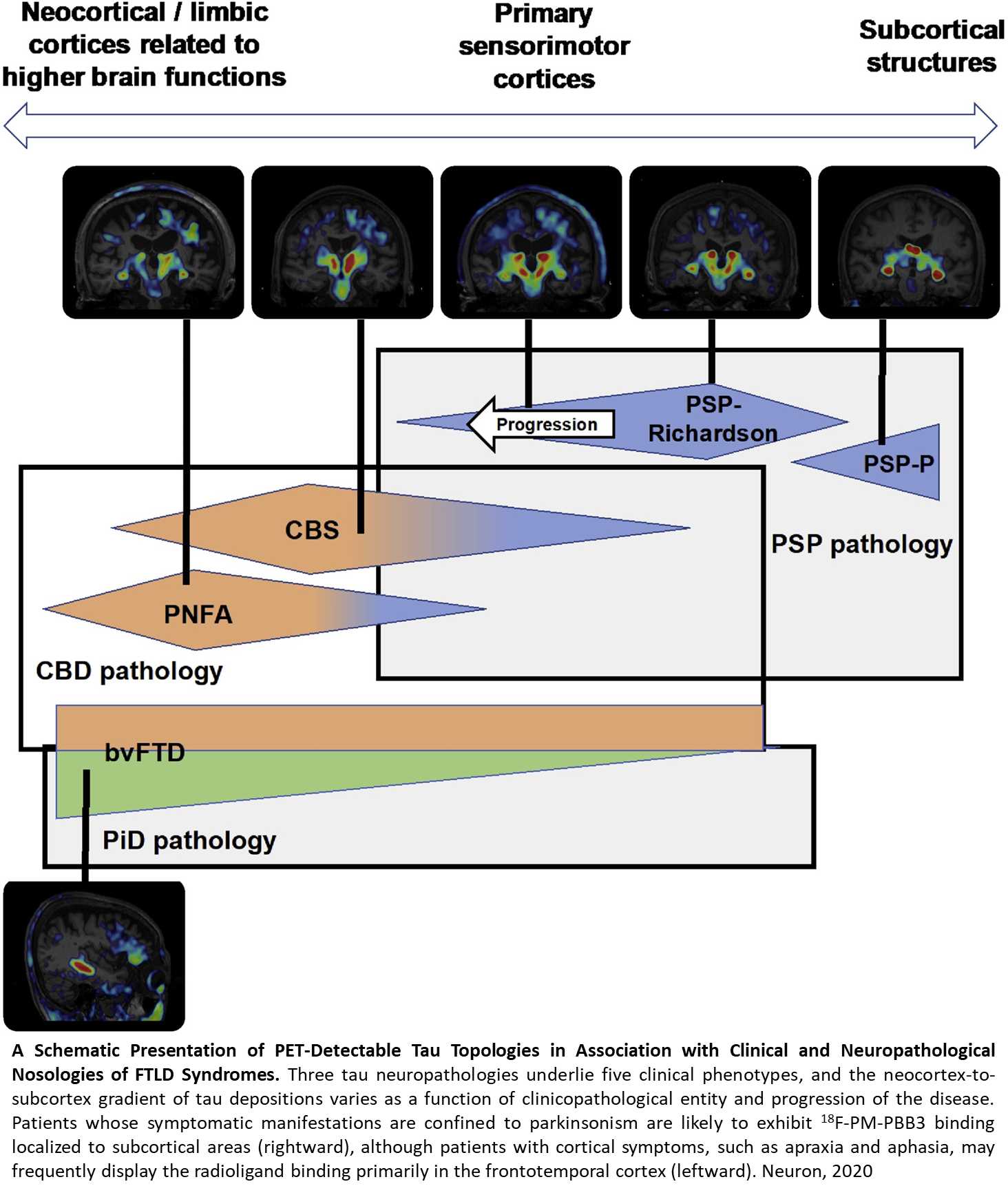 A new imaging-based method could enable the early detection and differentiation of a wide variety of neurodegenerative disorders characterized by the buildup of tau protein in the brain, suggests a study published  in the journal Neuron. The researchers demonstrate that the method, which uses an imaging technique called positron emission tomography (PET), enables sensitive detection of tau deposits in mouse models and in patients with Alzheimer's disease and various frontotemporal lobar degeneration (FTLD) disorders. The authors say the approach could also be used to evaluate disease mechanisms or anti-tau therapies.

"This study provided the first demonstration that abnormal tau protein deposits in Alzheimer's disease and diverse FTLD disorders can be captured with high contrast, allowing an individual-based diagnosis of these illnesses with high accuracy," says co-senior study author. "This finding indicates that a single PET tracer can cover the diagnosis and differentiation of a wide range of neurodegenerative dementias and is applicable to clinical workup in hospitals equipped with PET scanners."

Most age-related neurodegenerative diseases are characterized by aggregates of misfolded proteins such as tau. Abnormal tau deposits in the brain are present in patients with Alzheimer's disease and FTLD disorders, which cause progressive neuronal loss in the frontal and temporal lobes of the brain. FTLD is the pathological process underlying frontotemporal dementia, which can lead to behavioral, emotional, and language problems.

"As tau pathologies emerge in disease-specific regions of the brain decades before the clinical onset of the disease, it is anticipated that the diagnosis and differentiation of Alzheimer's disease, FTLD syndromes, and related disorders can be made at a preclinical or very early clinical stage according to the presence and absence and localization of tau aggregates," the author says.

Abnormal tau deposits in patients with Alzheimer's disease have been visualized using PET, which involves injecting molecular probes labeled with radioactive atoms into the body. But tau aggregates in patients with FTLD have not previously been detected with high sensitivity using existing PET probes. One major hurdle is that 11C-PBB3--an imaging probe designed to visualize tau deposits--breaks down rapidly after injection and does not enter the brain in large concentrations.

To overcome this problem, the authors chemically modified PBB3 to turn it into a more metabolically stable compound called PM-PBB3, which they labeled with fluorine-18. They showed that 18F-PM-PBB3 binds to tau deposits in brain sections from mice with a mutation that causes FTLD.

Moreover, the probe detected tau aggregates in 39 living patients with Alzheimer's disease and various FTLD disorders, including Pick's disease, progressive supranuclear palsy, and corticobasal degeneration. The technique could distinguish the different types of patients based on the location of the tau aggregates. Biopsy and autopsy results confirmed the clinical diagnoses of the patients who had undergone PET scanning. The uptake of 18F-PM-PBB3 in the human brain was approximately twice as high as 11C-PBB3, resulting in more sensitive detection of tau deposits.

In addition, the researchers tested 18F-PM-PBB3 in three individuals with mild cognitive impairment and 14 patients with Alzheimer's disease. The technique detected tau deposits at preclinical stages and differentiated individuals based on their severity of dementia. "The diagnosis of diverse dementias at an early stage is difficult on the basis of symptoms but will be enabled with the aid of the present imaging method," the author says.

Taken together, the findings demonstrate that 18F-PM-PBB3 offers high-contrast imaging of tau aggregates in a wide variety of patients with Alzheimer's disease and FTLD. The technique could be used for early diagnosis, disease staging, and the accurate identification of subtypes of patients. "These clear distinctions have not been possible with the use of previous tau PET probes," the author says.

In the future, the technique could be used in animal models to better understand the mechanisms underlying FTLD. PM-PBB3 could also be used to evaluate candidate anti-tau therapies in preclinical and clinical trials and to select and stratify patients for clinical trials. Moreover, the probe could be used to develop blood-based biomarkers for diagnosing different types of dementia. According to the authors, the approach is scalable and easy to implement in hospitals due to the widespread availability of PET scanners. "We hope to establish a next-generation diagnostic workflow for dementing diseases consisting of mass screening of the elderly population by blood tests followed by imaging workup for making a decision on the selection of appropriate treatment," the author says.

The researchers also plan to test the approach in long-term studies involving a larger sample size and a broader spectrum of neuropsychiatric disorders. They are partnering with a venture company called APRINOIA Therapeutics to conduct clinical trials for this imaging probe for its use as a diagnostic agent; the trials initiated by APRINOIA are at the phase II stage in the US and Taiwan and at the phase III and phase I stages in China and Japan, respectively.