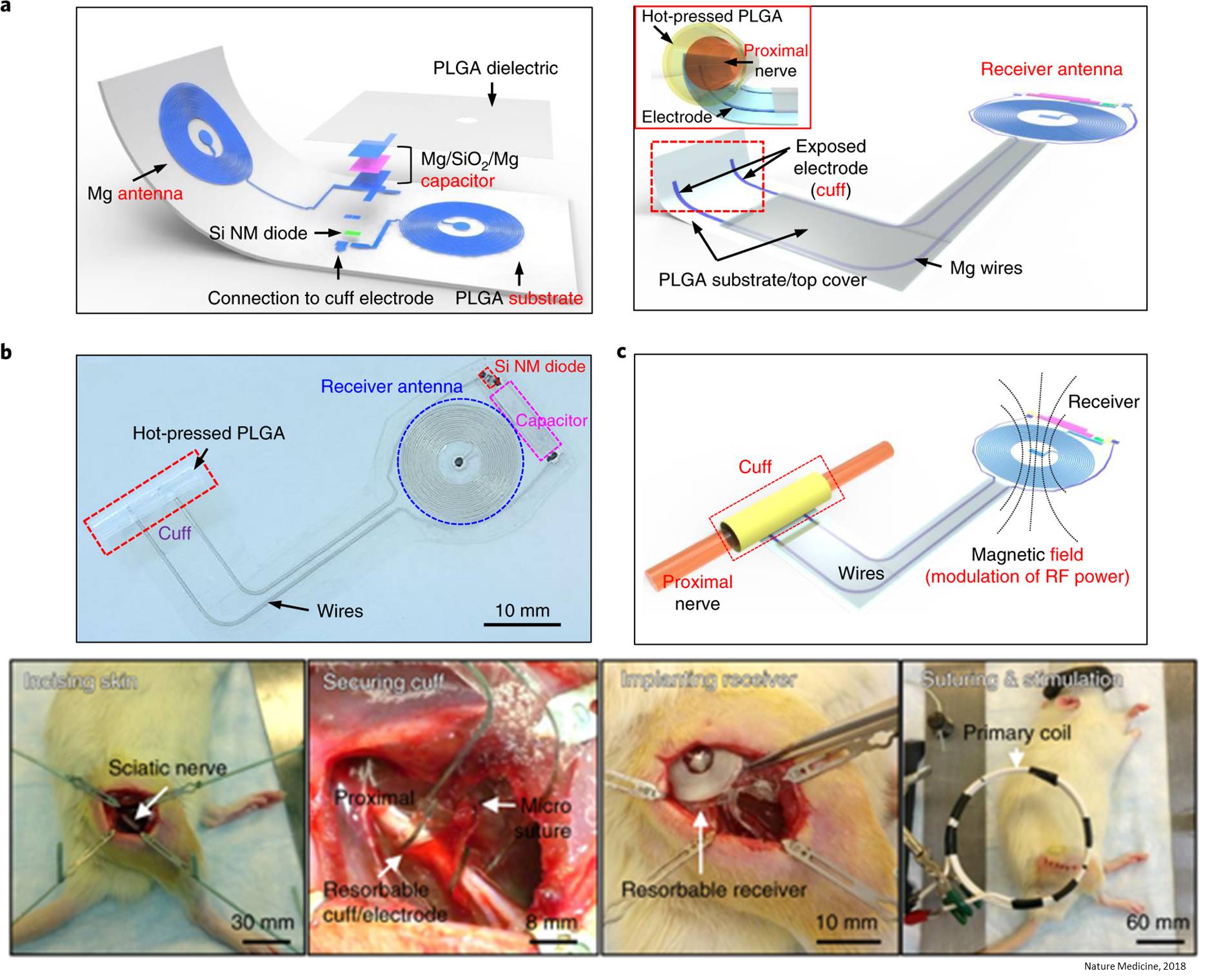 Researchers have developed the first example of a bioelectronic medicine: an implantable, biodegradable wireless device that speeds nerve regeneration and improves the healing of a damaged nerve.

The materials scientists and engineers developed a device that delivers regular pulses of electricity to damaged peripheral nerves in rats after a surgical repair process, accelerating the regrowth of nerves in their legs and enhancing the ultimate recovery of muscle strength and control. The size of a dime and the thickness of a sheet of paper, the wireless device operates for about two weeks before naturally absorbing into the body.

The scientists envision that such transient engineered technologies one day could complement or replace pharmaceutical treatments for a variety of medical conditions in humans. This type of technology, which the researchers refer to as a "bioelectronic medicine," provides therapy and treatment over a clinically relevant period of time and directly at the site where it's needed, thereby reducing side effects or risks associated with conventional, permanent implants.

The research is published in the journal Nature Medicine.

While the device has not been tested in humans, the findings offer promise as a future therapeutic option for nerve injury patients. For cases requiring surgery, standard practice is to administer some electrical stimulation during the surgery to aid recovery. But until now, doctors have lacked a means to continuously provide that added boost at various time points throughout the recovery and healing process.

The authors designed and developed a thin, flexible device that wraps around an injured nerve and delivers electrical pulses at selected time points for days before the device harmlessly degrades in the body. The device is powered and controlled wirelessly by a transmitter outside the body that acts much like a cellphone-charging mat.

The researchers then studied the bioelectronic device in rats with injured sciatic nerves. This nerve sends signals up and down the legs and controls the hamstrings and muscles of the lower legs and feet. They used the device to provide one hour per day of electrical stimulation to the rats for one, three or six days or no electrical stimulation at all, and then monitored their recovery for the next 10 weeks.

They found that any electrical stimulation was better than none at all at helping the rats recover muscle mass and muscle strength. In addition, the more days of electrical stimulation the rats received, the more quickly and thoroughly they recovered nerve signaling and muscle strength. No adverse biological effects from the device and its reabsorption were found.

"Before we did this study, we weren't sure that longer stimulation would make a difference, and now that we know it does, we can start trying to find the ideal time frame to maximize recovery," the author said. "Had we delivered electrical stimulation for 12 days instead of six, would there have been more therapeutic benefit? Maybe. We're looking into that now."

By varying the composition and thickness of the materials in the device, the team can control the precise number of days it remains functional before being absorbed into the body. New versions can provide electrical pulses for weeks before degrading. The ability of the device to degrade in the body takes the place of a second surgery to remove a non-biodegradable device, thereby eliminating additional risk to the patient.

The research study also showed the device can work as a temporary pacemaker and as an interface to the spinal cord and other stimulation sites across the body. These findings suggest broad utility, beyond just the peripheral nervous system.