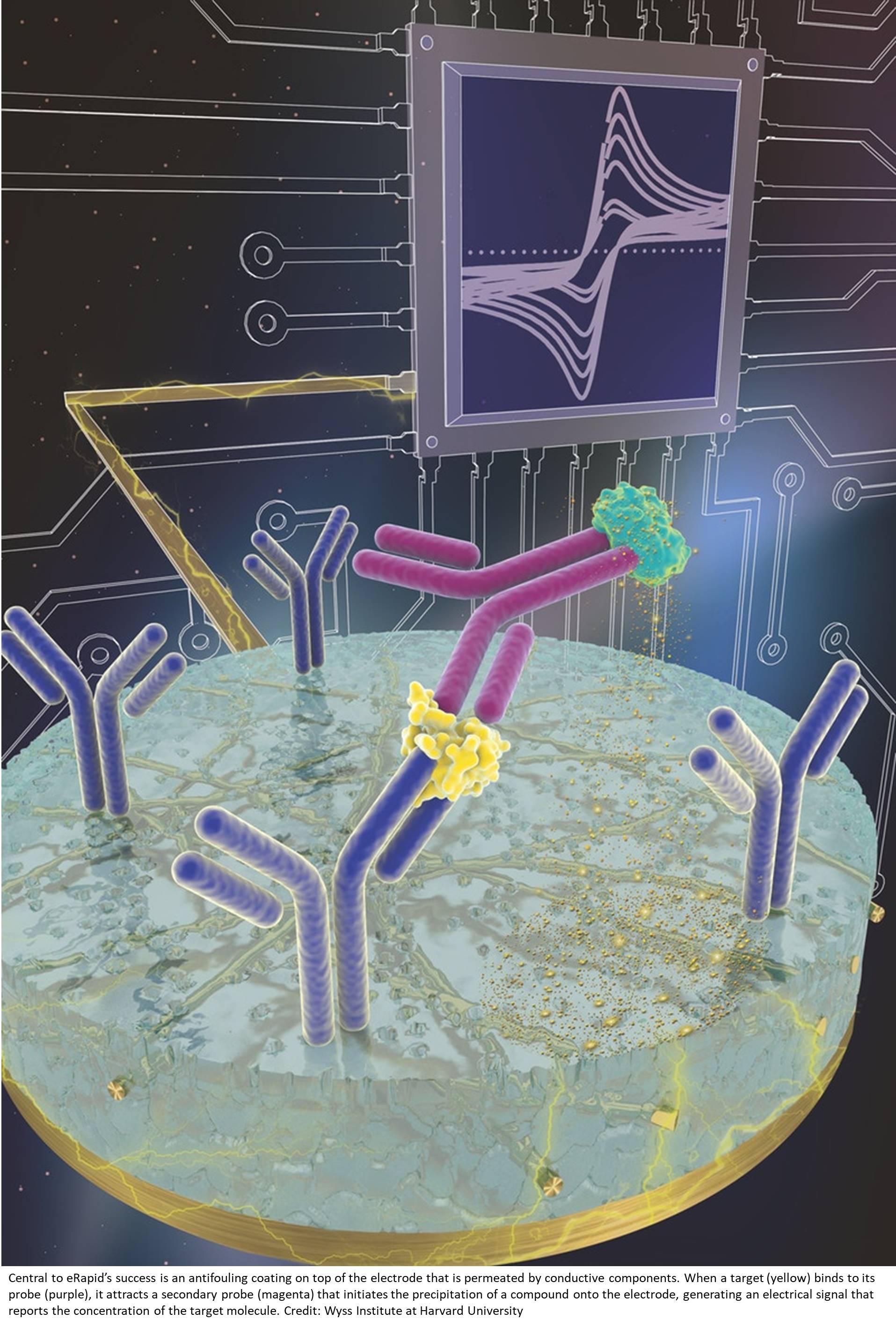 Handheld electrochemical sensors are part of the daily routine for millions of people with diabetes around the globe who monitor their blood sugar levels with electric glucometers. While such sensors have revolutionized at-home medical testing for diabetics, they have not yet been successfully applied to diagnosing other conditions.

Sensors like glucometers detect glucose in blood based on the activity of an enzyme, and there are only a limited number of enzymes that can be used to sense biomarkers of human disease. An alternative detection strategy based on binding events between antibodies and their molecular targets have been investigated to expand the use of electrochemical sensors for medicine, but these sensors fall victim to the rapid accumulation of "fouling" substances from biological fluids on their conductive surfaces, which deactivate them. Existing antifouling coatings are difficult to mass-manufacture, suffer from quality and consistency issues, and are not very effective.

Now, a new diagnostic platform technology developed by researchers known as "eRapid" enables the creation of low-cost, handheld electrochemical devices that can simultaneously detect a broad range of biomarkers with high sensitivity and selectivity in complex biological fluids, using as little as a single drop of blood. The technology is described in Nature Nanotechnology.

"As long as an antibody exists for a given target molecule, eRapid can detect it," said co-author. "By solving the biofouling problem with a simple yet robust design, we are now able to easily mass-produce biochemical sensors for a wide variety of applications at low-cost."

The challenge in developing the antifouling coating was to prevent accumulation of off-target substances on the sensor's metal electrodes while still maintaining their conductivity to allow sensing of the target. After experimenting with a variety of recipes, the research team developed a simple, porous, 3D matrix consisting of bovine serum albumin (BSA) crosslinked with glutaraldehyde and supported by a network of conducting nanomaterials, such as gold nanowires or carbon nanotubes. The small pore size of the BSA matrix size-excludes proteins found in blood and plasma, and the BSA's weak negative charge prevents the strong adhesion of positively charged biomolecules onto the sensor.

When the researchers tested their nanomaterial-coated sensors in human blood serum and plasma, they retained more than 90% of their ability to detect signal even after being stored for one month in those biofluids, whereas sensors coated with best previously published anti-fouling coatings lost significant signal sensitivity when incubated for one hour, and were completely inactivated after one day.

To functionalize the coated sensors, the researchers attached antibodies to the surface of the nanomaterial coating on top of the electrode, and used a "sandwich assay" to convert the antibody binding event into a chemical signal that precipitates onto the electrode surface, thereby generating an electric signal. The magnitude of the electrical signal directly correlates to the amount of the precipitate produced, and thus to the number of target molecules bound to the antibodies, allowing the concentration of the target to be measured.

The team demonstrated the commercial utility of this approach by creating a multiplexed sensor with three separate electrodes, each coated with the BSA/gold nanowire matrix and a layer of antibodies against a specific clinically relevant target molecule: interleukin 6 (IL6), insulin, or glucagon. When they incubated the sensor with the respective target molecules in undiluted human plasma, they observed excellent electrical signals with picogram-per-mL sensitivity. Conversely, electrodes coated with a published "PEG-SAM" anti-fouling coating failed to produce distinct signals, indicating that they had been irreversibly fouled by off-target molecules in human plasma samples. In addition, the BSA/gold-nanowire-coated sensors can be washed and reused multiple times with minimal signal loss, allowing serial monitoring of biomarkers easily and at low cost.

Since then, the team has been able to detect more than a dozen different biomarkers ranging from 100 Da to 150,000 Da in size with eRapid, and they are continuing to experiment with conductive nanomaterials to optimize the electrode coating and the system's performance, as well as reduce the cost even further. They are actively exploring commercialization options for eRapid in the handheld point-of-care diagnostics space, but also hope to extend the coating and sensor technology platform to other targets and contexts, including in-hospital diagnostics, environmental toxin sensing, small molecule detection, and implantable medical devices.

Interestingly, the team did not originally set out with this goal in mind. This work began because they needed to simultaneously detect multiple biomolecules produced by various types of tissue cells growing within human Organs-on-Chips to non-invasively assess their function and inflammatory status over time. The tiny volume of liquid outflows from the chips' channels necessitated highly sensitive sensors that could also be multiplexed, which led to the creation of the current technology.

"eRapid emerged from pursuing one innovation that led to another that has the potential to transform medical diagnostics. Hopefully, this simple technology will enable great advances in our ability to develop handheld diagnostic devices that can be used at home, as well as in pharmacies, ambulances, doctor's offices, and emergency departments in the near future," said the senior author. Why dark personalities can get ahead