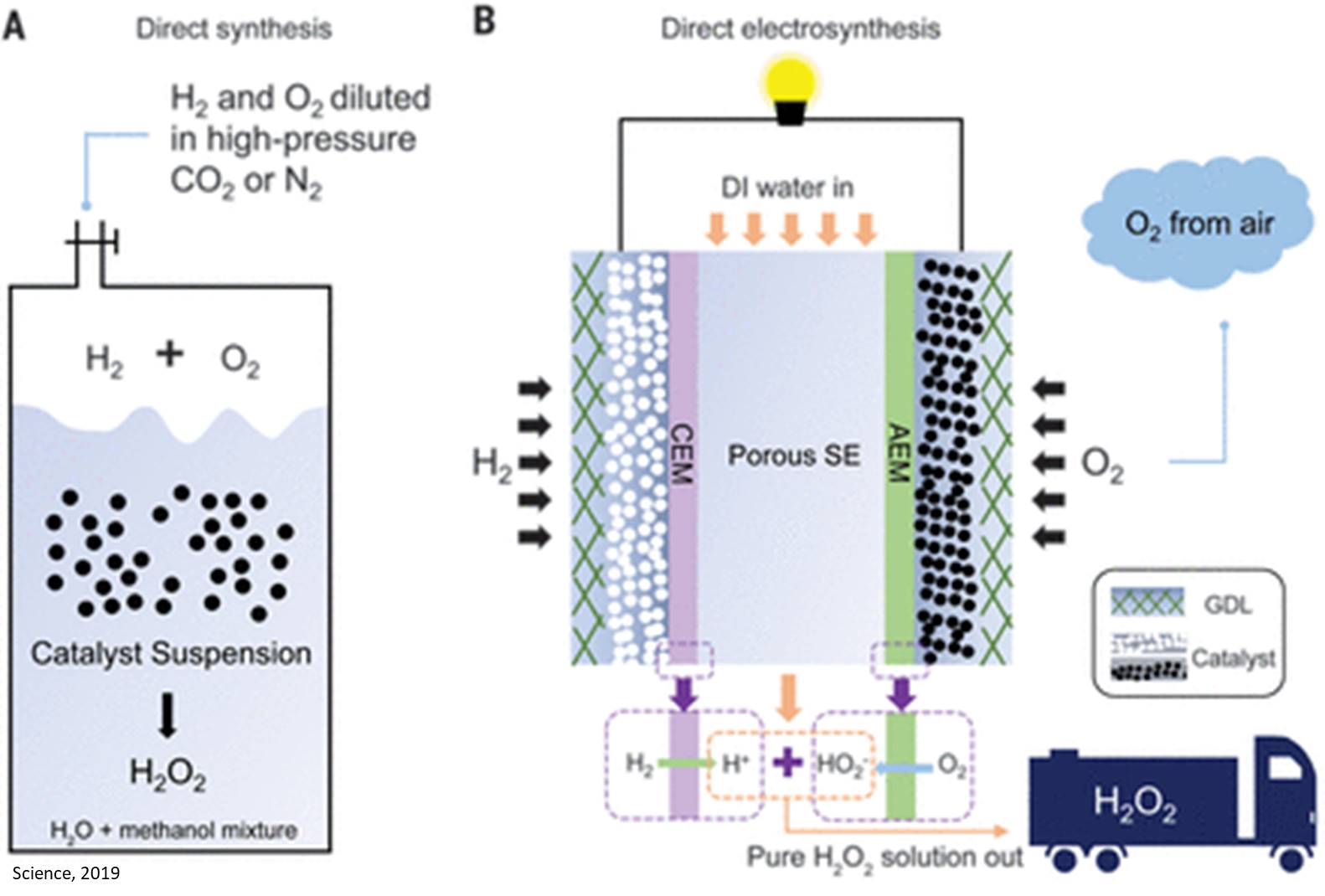 The production of hydrogen peroxide can be much safer and simpler through a process developed at Rice University. A reactor requires only air, water and electricity to make the valuable chemical in the desired concentration and high purity.

Their electrosynthesis process, detailed in Science, uses an oxidized carbon nanoparticle-based catalyst and could enable point-of-use production of pure hydrogen peroxide solutions, eliminating the need to transport the concentrated chemical, which is hazardous.

By using a solid electrolyte instead of traditional liquid electrolyte, it also eliminates the need for product separation or purification used in current processes, so no contaminating ions will be involved.

"If we have electricity from a solar panel, we can literally get hydrogen peroxide from just sunlight, air and water," said the author. "We don't need to involve organics or fossil fuel consumption. Hydrogen peroxide synthesis by traditional, huge chemical engineering plants generates organic wastes, consumes fossil fuels and emits carbon dioxide. What we're doing is green synthesis."

Hydrogen peroxide is widely used as an antiseptic, a detergent, in cosmetics, as a bleaching agent and in water purification, among many other applications. The compound is produced in industrial concentrations of up to 60% solution with water, but in many common uses, the solution is far more diluted.

"Industrial hydrogen peroxide has to be transported in high concentrations to maximize the economics," the author said. "Transportation is hazardous and costly because the concentrated compound is unstable. Hydrogen peroxide also degrades over time, and has to be stored once it gets to its destination. "Our technology delocalizes the production of hydrogen peroxide," the author said. "As renewable electricity input gets cheaper, air is free and water is also cheap, our product should be competitive in terms of price.

"Instead of storing containers of hydrogen peroxide, hospitals that use it as a disinfectant could in the future turn on a spigot and get, for instance, a 3% solution on demand," the author said. "Instead of storing chemicals to disinfect pool water, homeowners can flick a switch and turn on the reactor to clean their pools."

The Rice reactor is somewhat similar to a fuel cell, with electrodes on either side to process hydrogen (or water) and oxygen (from air), feeding them to catalysts on two electrodes sandwiching an ionically conductive porous solid electrolyte.

"A fuel cell minimizes the production of hydrogen peroxide to produce just water with maximized energy efficiency," said the lead author. "In our case, we want to maximize hydrogen peroxide instead, and have tuned our catalyst to do so."

The low-cost carbon black catalyst, set in a solid electrolyte and oxidized to enhance its reactivity, shifts the oxygen reduction pathway towards the desired chemical at rates and concentrations determined by the applied voltage, air and water feedstock and a steady supply of deionized water. The reaction takes place under ambient temperatures and pressures.

The lab plans to engineer both larger reactors and plug-and-play components with an eye toward testing with industrial partners. They see a great promise for industrial-scale applications like municipal water purification systems. The Rice lab has tested low concentrations of its product on campus rainwater and proved its ability to remove organic carbon contaminants.

"There are so many potential applications," the senior author said. "Before this, electrochemical synthesis of hydrogen peroxide was limited by its product separation or purification process, but we've solved the big barrier to practical applications."