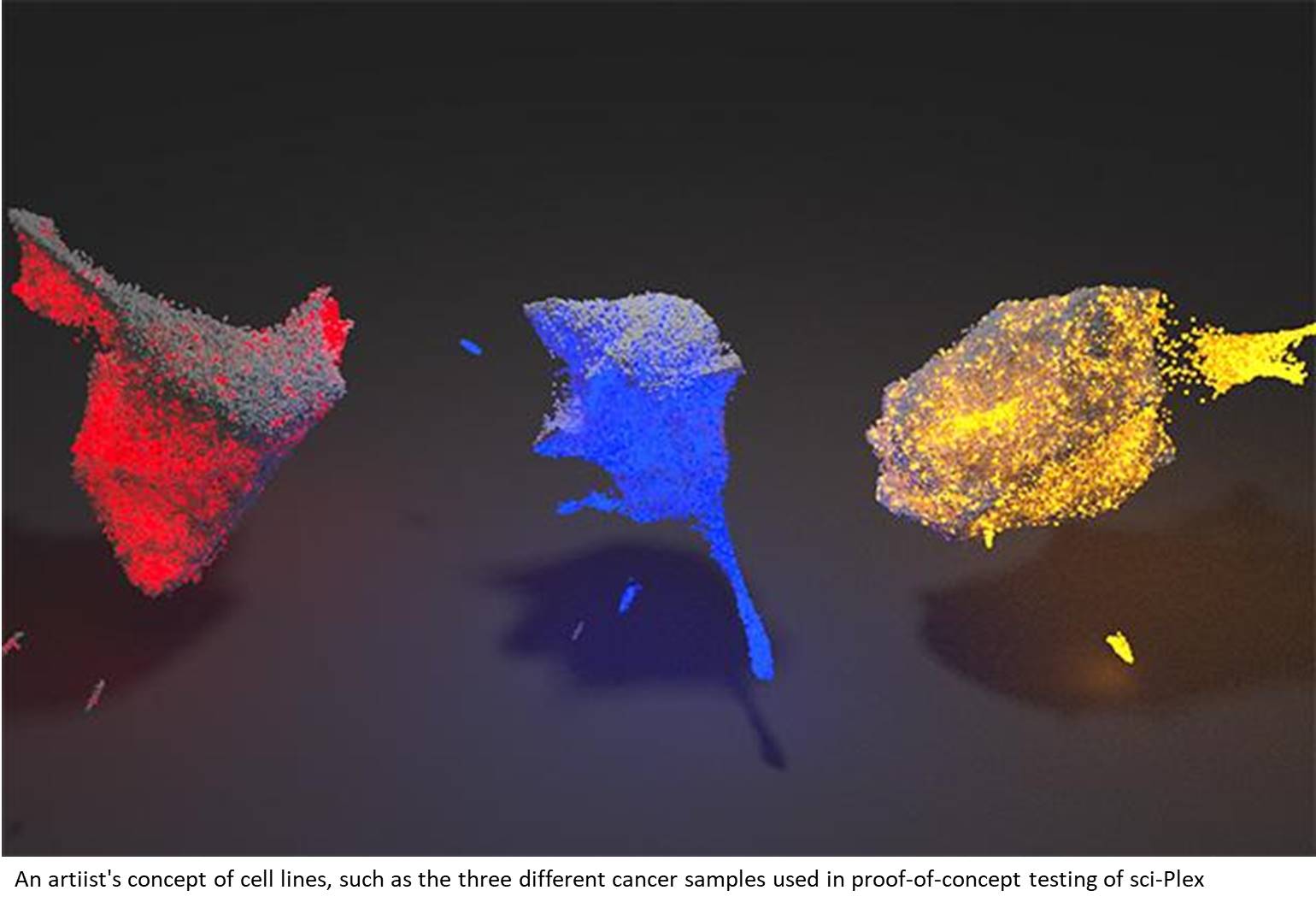 A new technique reported in Science  overcomes several limitations of typical high-throughput chemical screens conducted on cell samples. Such screens are commonly used to try to discover new cancer drugs, and in many other biomedical applications.

Most current screens of this nature offer either a coarse readout, such as of cell survival, proliferation or alterations in cell shapes, or only a specific molecular finding, such as testing whether a particular enzyme is blocked.

Because of the huge gap between those extremes, most assays routinely miss subtle gene expression or cell state changes that might unveil mechanisms triggered inside perturbed cells. Such assays can also fail to detect nuances that might indicate unexpected side effects of drugs being tested, or varying reactions among genetically identical cells to the same drug, or why cells become resistant to treatment that was previously working well.

To address these limitations, a research team representing many fields collaborated to develop a more informative technique.

"This technology actually occupies a niche between the two common kinds of assays," said one of the lead researchers. "You can get a sort of global view of the cellular responses. We think it's going to be really powerful to categorize drugs, for example, and say what their mechanism is."

The new technology combines improvements in labeling cell nuclei with advances in profiling which genes are expressed in each of millions of cells. This was accomplished at a single-cell resolution and in a cost-effective manner. They named the new screening method sci-Plex.In the journal Science, the researchers report their proof-of-concept findings.

"The sci-Plex technique allows us to pool lots of genetically different cells and see what happens to many individual cells as they are perturbed in many different ways," said another author. "We then collect all the data together and analyze it using modern tools from machine learning and data science to understand something about what each of those drugs does to the cells."

To put sci-Plex through its paces, the researchers applied it to a screen using three kinds of cancer cell lines (leukemia, lung cancer and breast cancer) treated with 180 compounds used for cancer, HIV and autoimmune disease therapies. The cells were labeled with a nuclear hashing of small, single strands of DNA.

This hashing identifies different cells and permits scientists to map which cells received which drug. In just one experiment, the researchers measured gene expression in 650,000 single cells from more than 5,000 independently treated samples.

The results indicated significant differences in the ways some of the cancer cells reacted to specific compounds. They also revealed shared patterns among cells with regard to other chemical families as well as some properties that distinguished drugs within a chemical family.

The researchers delved more deeply into the mode of action of one class of cancer drugs, HDAC inhibitors. They saw that the gene regulatory changes matched the proposition that these inhibitors stopped cancer cell proliferation by blocking access to an energy source.

Describing another aspect of the research, the lead said, "It was really cool that we could use gene expression profiles to categorize the potency of drugs. With changes in dose over four orders of magnitude, we could see a smooth increase in the cellular response."

Overall, the sci-Plex results suggest that it could be scaled to thousands of samples to target diverse biochemical pathways, catalysts, regulators and modes of action.

"Some of this work could pertain to the treatment of disease, in helping medical researchers understand how certain drugs produce their effects, how the cell stage influences effectiveness, and why some medications work on some cells, but not on others," the senior author said.

"Physicians also give many people the same handful of drugs, and they work for some people and not for others," the author added. "Potentially sci-Plex could help us better understand why that is."

The authors believe sci-Plex could be a useful tool for precision medicine: "Ultimately when someone gets sick with cancer, we want to kill the whole tumor, all of the cells, not just some of the cells. So understanding why some individual cells respond one way to a drug and others respond differently is critical to designing therapies that will be completely effective."

A distinct advantage of sci-Plex, the researchers noted, is that it can distinguish how a compound affects subsets of cells. In addition to those that make up tumors, such subsets could also include lab-dish living models such as reprogrammed cells, organoids, and synthetic embryos.

The researchers predict that the ease and low cost of nuclear hashing, combined with the flexibility and scalability of their methods for single-cell sequencing, could give sci-Plex many basic research and practical applications in biomedicine. For example, it might help in building a comprehensive atlas of cellular responses to pharmaceutical interventions.

"It's a very generalizable strategy," the lead said. "It can be performed with reagents which any scientist can acquire and it can be used in many ways."