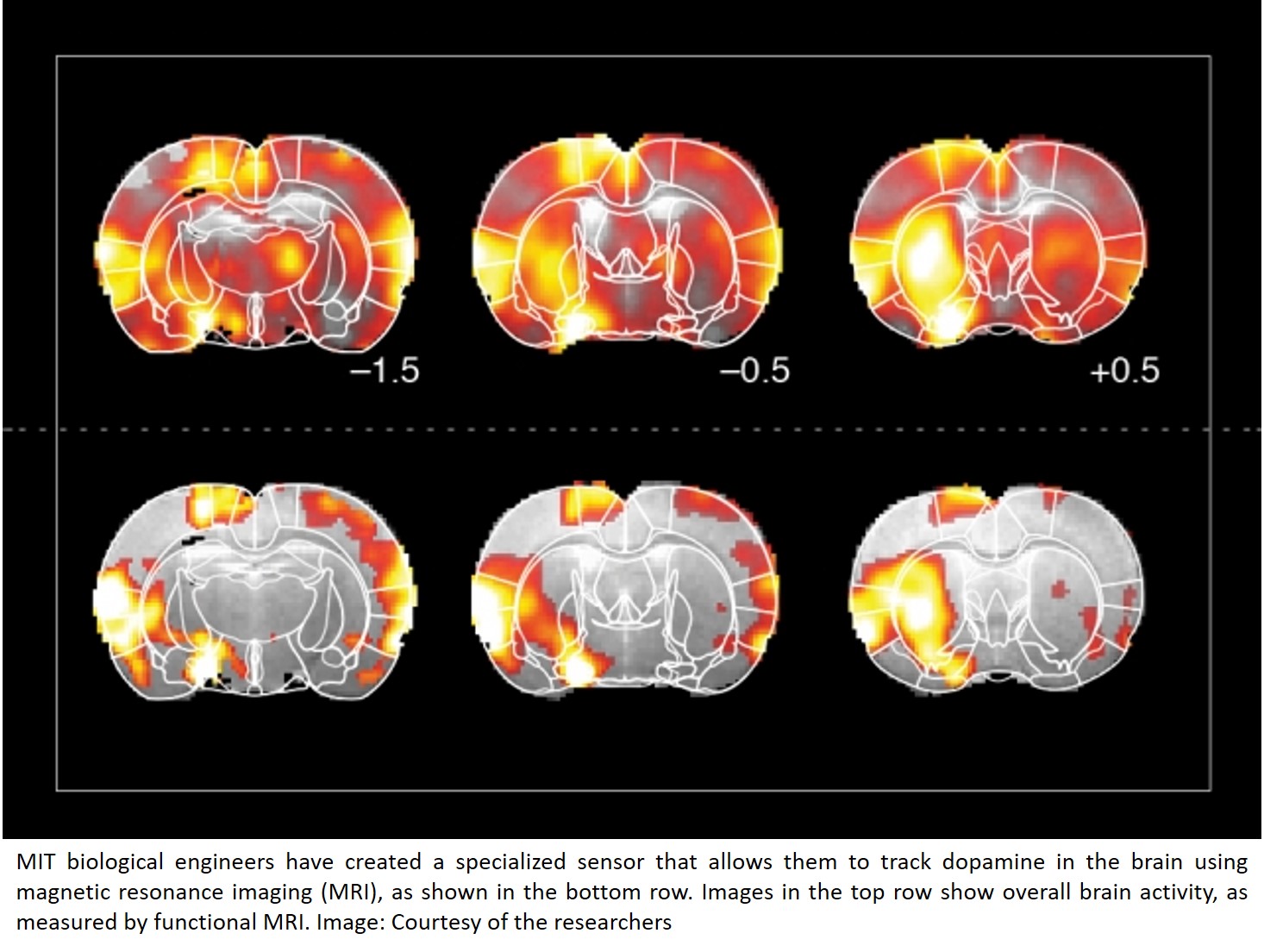 Using a specialized magnetic resonance imaging (MRI) sensor, neuroscientists have discovered how dopamine released deep within the brain influences both nearby and distant brain regions.

Dopamine plays many roles in the brain, most notably related to movement, motivation, and reinforcement of behavior. However, until now it has been difficult to study precisely how a flood of dopamine affects neural activity throughout the brain. Using their new technique, the team found that dopamine appears to exert significant effects in two regions of the brain’s cortex, including the motor cortex.

“There has been a lot of work on the immediate cellular consequences of dopamine release, but here what we’re looking at are the consequences of what dopamine is doing on a more brain-wide level,” says the senior author of the study.

The team found that in addition to the motor cortex, the remote brain area most affected by dopamine is the insular cortex. This region is critical for many cognitive functions related to perception of the body’s internal states, including physical and emotional states. The study appears in Nature.

Like other neurotransmitters, dopamine helps neurons to communicate with each other over short distances. Dopamine holds particular interest for neuroscientists because of its role in motivation, addiction, and several neurodegenerative disorders, including Parkinson’s disease. Most of the brain’s dopamine is produced in the midbrain by neurons that connect to the striatum, where the dopamine is released.

For many years, the lab has been developing tools to study how molecular phenomena such as neurotransmitter release affect brain-wide functions. At the molecular scale, existing techniques can reveal how dopamine affects individual cells, and at the scale of the entire brain, functional magnetic resonance imaging (fMRI) can reveal how active a particular brain region is. However, it has been difficult for neuroscientists to determine how single-cell activity and brain-wide function are linked.

“There have been very few brain-wide studies of dopaminergic function or really any neurochemical function, in large part because the tools aren’t there,” the senior author says. “We’re trying to fill in the gaps.”

About 10 years ago, the lab developed MRI sensors that consist of magnetic proteins that can bind to dopamine. When this binding occurs, the sensors’ magnetic interactions with surrounding tissue weaken, dimming the tissue’s MRI signal. This allows researchers to continuously monitor dopamine levels in a specific part of the brain.

In their new study, the authors set out to analyze how dopamine released in the striatum of rats influences neural function both locally and in other brain regions. First, they injected their dopamine sensors into the striatum, which is located deep within the brain and plays an important role in controlling movement. Then they electrically stimulated a part of the brain called the lateral hypothalamus, which is a common experimental technique for rewarding behavior and inducing the brain to produce dopamine.

“When dopamine was released, there was a longer duration of activity, suggesting a longer response to the reward,” the senior author says. “That may have something to do with how dopamine promotes learning, which is one of its key functions.”

After analyzing dopamine release in the striatum, the researchers set out to determine this dopamine might affect more distant locations in the brain. To do that, they performed traditional fMRI imaging on the brain while also mapping dopamine release in the striatum. “By combining these techniques we could probe these phenomena in a way that hasn’t been done before,” the senior author says.

The regions that showed the biggest surges in activity in response to dopamine were the motor cortex and the insular cortex. If confirmed in additional studies, the findings could help researchers understand the effects of dopamine in the human brain, including its roles in addiction and learning.

“Our results could lead to biomarkers that could be seen in fMRI data, and these correlates of dopaminergic function could be useful for analyzing animal and human fMRI,” the senior author says.