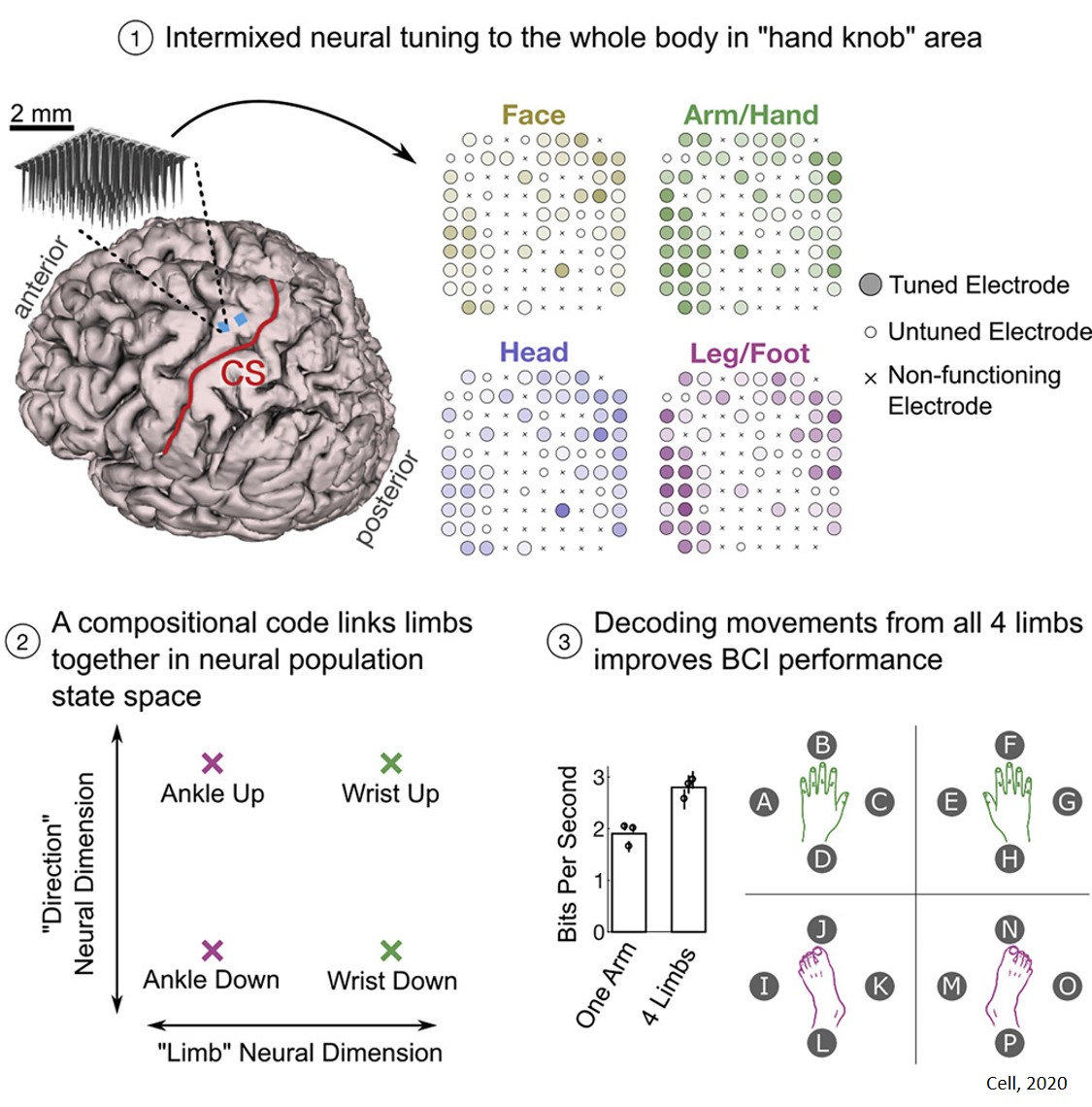 Mapping different parts of the brain and determining how they correspond to thoughts, actions, and other neural functions is a central area of inquiry in neuroscience, but while previous studies using fMRI scans and EEG have allowed researchers to rough out brain areas connected with different types of neural activities, they have not allowed for mapping the activity of individual neurons.

Now in a paper publishing in the journal Cell, investigators report that they have used microelectrode arrays implanted in the brains of two people to map out motor functions down to the level of the single nerve cell. The study revealed that an area believed to control only one body part actually operates across a wide range of motor functions. It also demonstrated how different neurons coordinate with each other.

"This research shows for the first time that an area of the brain previously thought to be connected only to the arm and hand has information about the entire body," says first author. "We also found that this area has a shared neural code that links all the body parts together."

The new study involved two participants who have chronic tetraplegia--partial or total loss of function in all four limbs. One of them has a high-level spinal cord injury and the other has amyotrophic lateral sclerosis. Both have electrodes implanted in the so-called hand knob area of the motor cortex of their brains. This area--named in part for its knoblike shape--was previously thought to control movement in the hands and arms only.

The investigators used the electrodes to measure the action potentials in single neurons when the participants were asked to attempt to do certain tasks--for example, lifting a finger or turning an ankle. The researchers looked at how the microarrays in the brain were activated. They were surprised to find that the hand knob area was activated not only by movements in the hand and arm, but also in the leg, face, and other parts of the body.

"Another thing we looked at in this study was matching movements of the arms and legs," the author says, "for example, moving your wrist up or moving your ankle up. We would have expected the resulting patterns of neural activity in motor cortex to be different, because they are a completely different set of muscles. We actually found that they were much more similar than we would have expected." These findings reveal an unexpected link between all four limbs in motor cortex that might help the brain to transfer skills learned with one limb to another one.

The author says that the new findings have important implications for the development of BCIs to help people who are paralyzed to move again. "We used to think that to control different parts of the body, we would need to put implants in many areas spread out across the brain," the author notes. "It's exciting, because now we can explore controlling movements throughout the whole body with an implant in only one area."

One important potential application for BCIs is allowing people who are paralyzed or have locked-in syndrome to communicate by controlling a computer mouse or other device. "It may be that we can connect different body movements to different types of computer clicks," the author says. "We hope we can leverage these different signals more accurately to enable someone who can't talk to use a computer, since neural signals from different body parts are easier for a BCI to tease apart than those from the arm or hand alone."