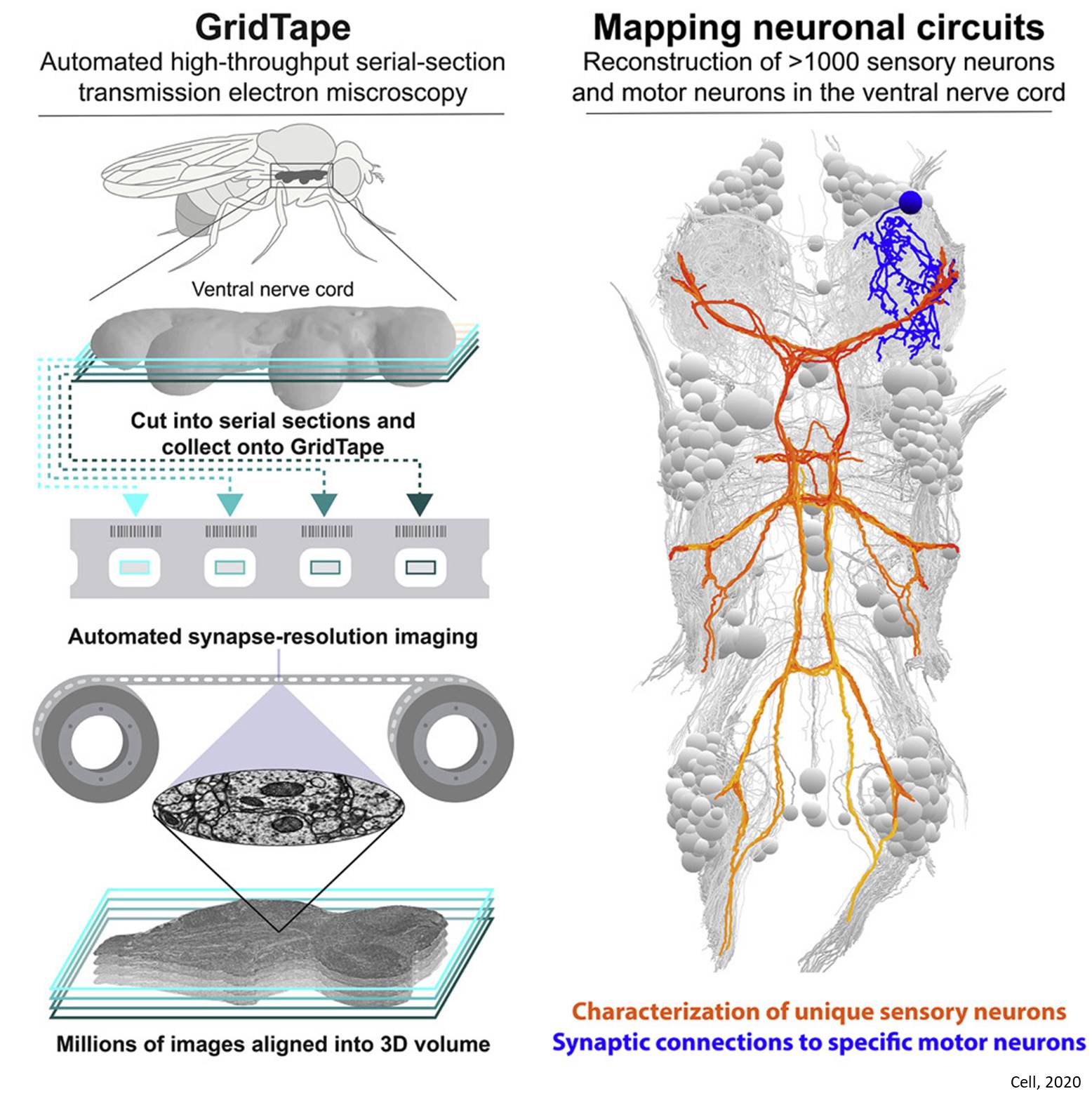 How are networks of neurons connected to make functional circuits? This has been a long standing question in neuroscience. To answer this fundamental question, researchers developed a new way to study these circuits and in the process learn more about the connections between them.

"Neural networks are extensive, but the connections between them are really small," says the senior author. "So, we have had to develop techniques to see them in extremely high-resolution over really large areas and volumes." To do so, the team developed an improved process for large-scale electron microscopy (EM) -- a technique first developed in the 1950s using accelerated electrons beams to visualize extremely small structures.

"But the problem with electron microscopy is that because it provides such high image resolution, it has been difficult to study whole neural circuits," says the author. "To improve the technique, we developed an automated system to image at high-resolution, but at the scale to encompass neuronal circuits." A paper describing this work was published in Cell.

Traditional EM requires hand collection of thousands of tissue samples onto a grid. The tissue is sliced in 40 nanometer-thick sections, about a thousand times thinner than a human hair. The technique automates collection of the samples, assigning a barcode to each section, and applying them to a conveyor belt that could then be fed through an electron microscope like a movie projector. An advantage of the technique is that every neuron is labeled in each tissue section.

"As the electrons pass through each section, we can image each neurons in fine detail," the author explains. "And because all of the sections are labeled with a barcode we know exactly where each of these sections comes from so we can reconstruct the circuits."

"This new technique allows us to do electron microscopy faster and in an automated way, with high quality, yet at a reasonable price," says the author.

In their paper, the team provides GridTape instrumentation designs and software to make large-scale EM accessible and affordable to the larger scientific research community.

The team used their GridTape method to study the ventral nerve cord of the Drosophila melanogaster fruit fly, which is similar to the spinal cord. It contains all the circuits the fly uses to move its limbs. Their goal: create a comprehensive map of the neuronal circuits that control motor function.

"By applying this method to the entire nerve cord, we were able to reconstruct all of its motor neurons, as well as a large population of sensory neurons," says the author.

In the process, they discovered a specific kind of sensory neuron in the fly thought to detect changes in load, like body weight. "These neurons are very large, relatively rare in number, and they make direct connections onto motor neurons of the same type on both sides of the body," says the author. "We believe this may be a circuit that helps stabilize body position."

From this work, the team created a map of more than 1,000 motor and sensory neuron reconstructions available on an open registry. "It allows anyone in the world to access this data set and look at any neuron that they're interested in and ask who they're connected to," says the author.

Now with the ability to map ever larger neural circuits, the author believes this technique could be useful for studying neuronal circuits in larger brains and testing predictions about neural function and behavior. The team is now studying the technique in mice and other researchers in the UK and Japan are applying the technique across multiple animal systems.

In addition, the technology has broader potential uses where large numbers of samples need to be imaged at a very high resolution.

"So, in principle, various forms of electron microscopy could be advanced by using this technique if people need to generate lots and lots of data," says the author, including DNA sequencing using EM, or cryogenic EM to solve protein structures.