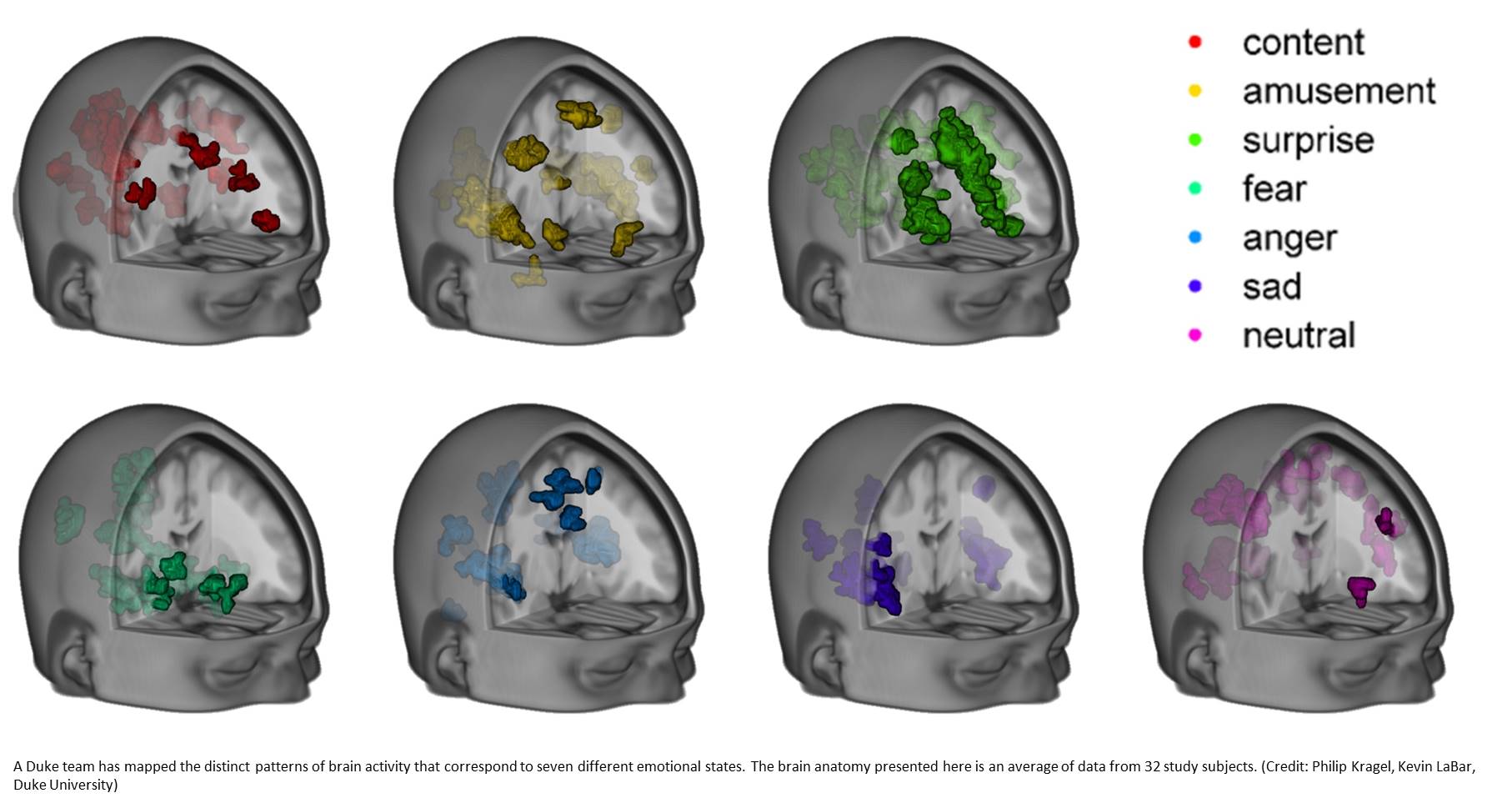 As you relax and let your mind drift aimlessly, you might remember a pleasant vacation, an angry confrontation in traffic or maybe the loss of a loved one.

And now a team of researchers at Duke University say they can see those various emotional states flickering across the human brain.

“It’s getting to be a bit like mind-reading,” said the senior author. “Earlier studies have shown that functional MRI can identify whether a person is thinking about a face or a house. Our study is the first to show that specific emotions like fear and anger can be decoded from these scans as well.”

The data produced by a functional MRI hasn’t changed, but the group is applying new multivariate statistics to the scans of brain activity to see different emotions as networks of activity distributed across areas of the conscious and unconscious brain.

These networks were first mapped by the team in a March 2015 paper in the journal Social, Cognitive and Affective Neuroscience. They identified seven different patterns of brain activity reflecting contentment, amusement, surprise, fear, anger, sadness and neutrality.

To build these maps, they had put 32 research subjects into the scanner and exposed them to two music clips and two film clips that had been shown to induce each of the seven emotions. The subjects also completed self-report questionnaires on their mood states for further validation.

Analytical software called a machine learning algorithm was then presented with some of the subjects’ data and tasked with finding a pattern that concurred with each emotional stimulus. Having learned what each of the seven states ought to look like, the algorithm was then presented with the scans of the rest of the study group and asked to identify their emotional states without knowing which emotion prompt they received.

Senior author said the model performed better than chance at this task, despite differences in brain shapes and arousal levels between subjects. “And it proved fairly sensitive,” author said.

The latest study, appearing in Plos Biology, followed up by scanning 21 subjects who were not offered stimuli, but were encouraged to let their minds wander. Every thirty seconds, they responded to a questionnaire about their current emotional state.

Data for the whole brain was collected every 2 seconds and each of these individual scans was compared to the seven patterns. The team examined the scanner data for the ten seconds previous to each self-report of mood, and found that the algorithm accurately predicted the moods the subjects self-reported.

In a second group of 499 subjects being scanned for the Duke Neurogenetics Study, the researchers had them rest in the scanner for nearly 9 minutes, and then asked them how depressed and anxious they felt after the scanning session. “We found that the cumulative presence of our ‘sad’ emotion map, summed over time, predicted their depression scores, and the cumulative presence of our ‘fear’ emotion map predicted their anxiety scores,” senior author said.

This larger group was also tested for personality measures of depression, anxiety, and angry hostility. Again, the maps for depression and anxiety closely mirrored these measures. “We also showed that the cumulative presence of our ‘angry’ emotion map predicted individuals’ angry hostility traits,” senior author said.

Aside from being an interesting proof of concept, author thinks these new maps of emotional states could be useful in studying people who have poor insight into their emotional status, and might be used in clinical trials to test the effectiveness of treatments to regulate emotions.