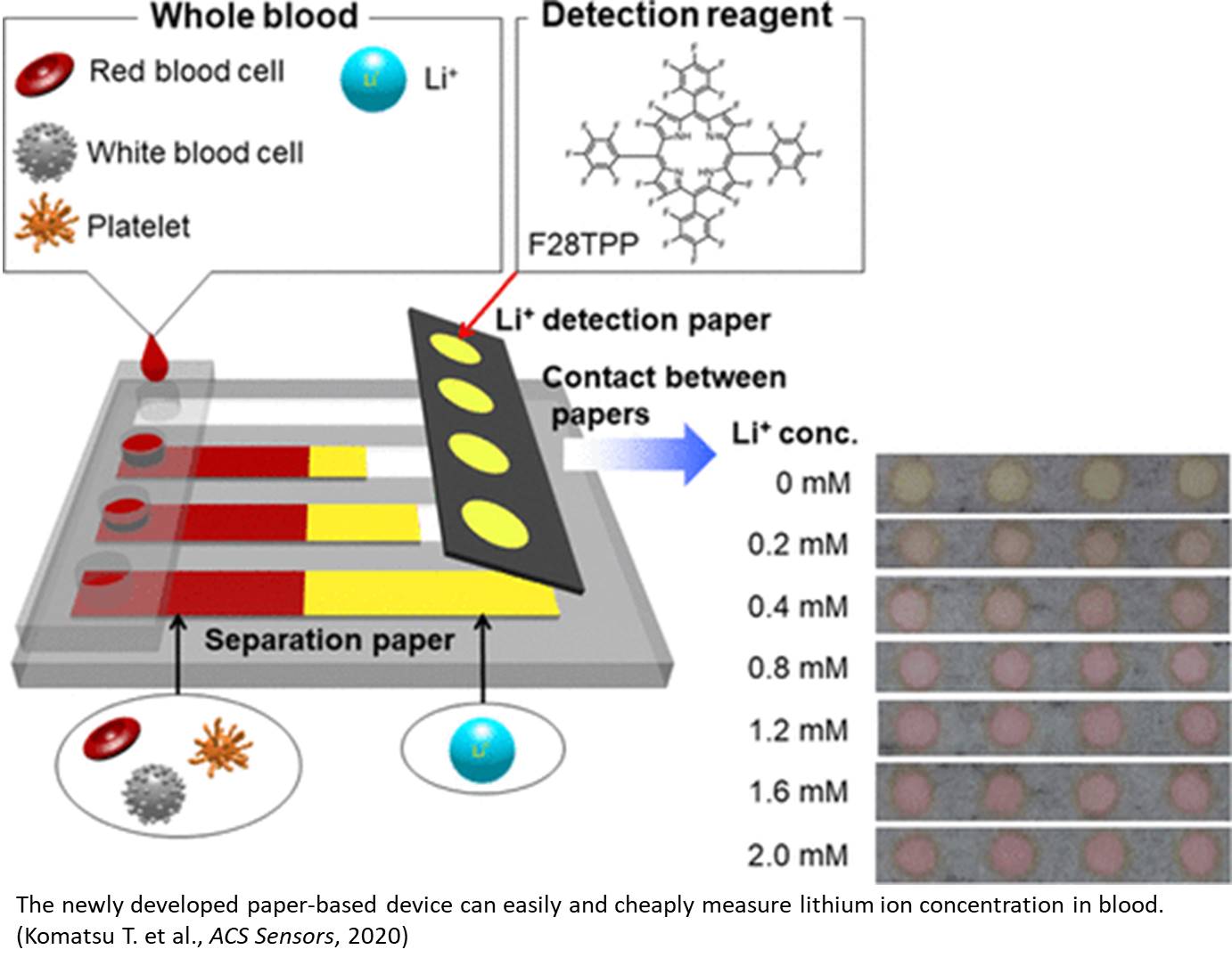 A group of researchers have developed a paper-based device that can easily and cheaply measure lithium ion concentration in blood, which could greatly help bipolar disorder patients.

Lithium carbonate is used for treating bipolar disorder, a mental health condition that causes extreme mood swings. But using this drug requires caution because the therapeutic concentration range of lithium ions in blood is narrow and close to the toxic range. Japan's Pharmaceuticals and Medical Devices Agency warns doctors to regularly examine lithium ion concentration levels in the blood of patients given the drug.

However, existing examination methods require a large amount of blood, special operations, and large, expensive devices. These methods can be performed only by certain testing laboratories.

The study was published in ACS Sensors.

The researchers succeeded in making a colorimetric paper-based device that allows point-of-care testing in one step. The device consists of two paper-based elements linked to each other: a blood cell separation unit and a colorimetric detection unit. High-purity cotton blotting paper and blood cell separation membrane, which are both available on the market, are used as a substrate for each unit, respectively. Hydrophobic ink was coated on the device to allow easy liquid handling.

After a drop from a blood sample is placed on the end of the separation unit, plasma, or the liquid portion of the blood in the sample, is automatically separated and transported to the detection unit dry-coated with a reagent, which displays a diagnostic color. This process takes about a minute to complete. To measure the color, a digital camera obtains the image for analysis without any fixed light condition, a process that makes the conventional, special device for this task unnecessary. The researchers showed that the device's detection ability is comparable to that of conventional instruments using the same colorimetric reaction.

"The device provides an alternative method for regularly monitoring lithium ion concentrations when treating bipolar disorder patients," says the lead author. "In the future, we hope to develop a smartphone app for the image analysis so patients themselves or non-medical workers can check the lithium ion concentration in the blood." The researchers also say that by tuning detection reagents and other components, the device can be used for measuring the concentration of blood components other than lithium ions.