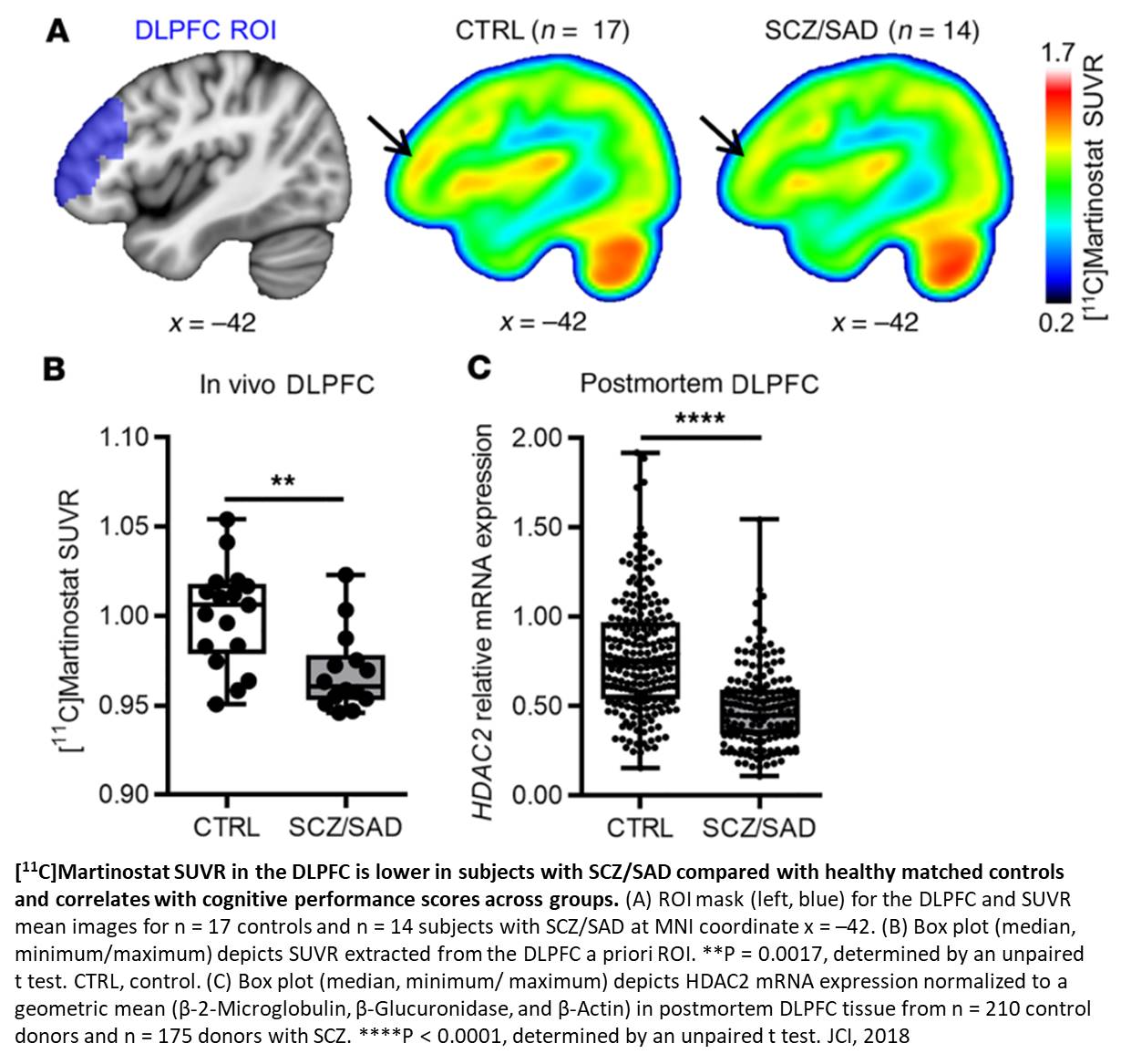 A study using a PET scan tracer has identified, for the first time, epigenetic differences between the brains of individuals with schizophrenia and those of unaffected study participants. In their report published online in the Journal of Clinical Investigation, the team describes measuring differences in the expression of histone deacetylase (HDAC) enzymes, important regulators of gene transcription, in a brain structure known to be important for key cognitive functions. While reduced HDAC levels had previously been observed in postmortem brain samples from patients with schizophrenia, use of the tracer, named Martinostat, allows measurement of HDACs in the brains of living individuals.

"HDAC enzymes can profoundly influence gene expression in the brain and may alter cognition," says lead author. "With Martinostat, instead of being confined to analyzing small tissue samples, as in earlier studies, we can now assay HDAC expression and distribution across the entire living brain in a single PET scan. Beyond comparisons between healthy and disease states, this will enable long-term studies exploring the relationship between HDAC levels and disease onset, progression and symptom severity."

This is the first to use the tracer to compare HDAC levels in the brains of living individuals with and without a neuropsychiatric disorder. Previous animal studies had linked disruption of HDAC levels to cognitive issues, such as memory formation, and HDAC inhibitors have had beneficial effects in mouse models of several neuropsychiatric and neurodegenerative diseases.

For the current study the investigators focused on HDAC levels in the dorsolateral prefrontal cortex (DLPFC), a brain region known to be important for aspects of executive functions - such as working memory, planning and flexibility - that are impaired in people with schizophrenia. A previous study from the research team had observed lower expression of an important HDAC in DLFPC tissue from deceased patients with schizophrenia than in tissue from unaffected individuals.

The current study enrolled 14 individuals with schizophrenia or the related schizoaffective disorder, all receiving long-term treatment for moderately severe symptoms, and 17 healthy control volunteers. All participants completed a standard assessment of cognitive functions typically affected by schizophrenia, and those with schizophrenia had an interview to assess symptom severity prior to PET scanning with the Martinostat tracer.

As expected, the scans revealed that Martinostat uptake indicating binding to HDAC2 - the enzyme that was reduced in the postmortem study - was significantly lower in the DLFPC of participants with schizophrenia than in the control group, with levels of reduction corresponding with worse cognitive performance scores. An analysis of Martinostat uptake across the whole brain indicated not only that HDAC expression was lower in some structures adjacent to the DLFPC but, unexpectedly, that it was higher in cerebral white matter and in the cerebellum, structures that also have been associated with schizophrenia.

"While we found preliminary correlations between the relative Martinostat signal in the cerebral white matter and multiple aspects of cognitive testing - such as processing speed and working memory - we don't yet know which types of cognitive factors HDAC is most closely correlated with," says the lead author. "Moving forward we hope to apply advanced cognitive measures to our studies to help better understand the relationship between HDAC levels and human cognition."