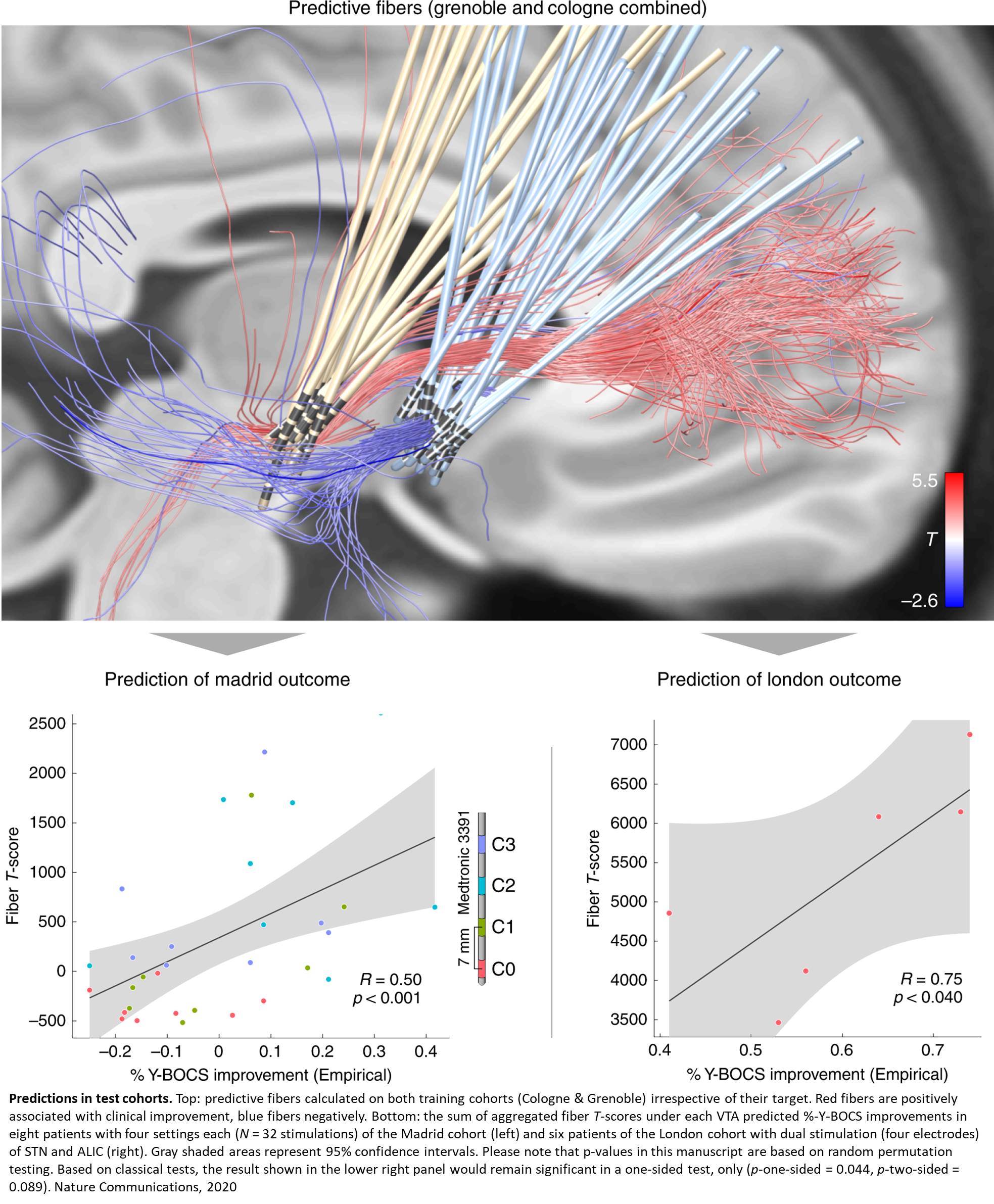 A group of researchers have further refined the use of deep brain stimulation in the treatment of obsessive-compulsive disorder. By accurately localizing electrode placement in the brains of patients, the researchers were able to identify a fiber tract which is associated with the best clinical outcomes following deep brain stimulation. The researchers' findings, which have been published in Nature Communications*, may be used to improve the treatment of obsessive-compulsive disorder.

A person with obsessive compulsive disorder (OCD) experiences unwanted thoughts and behaviors, the urge for which they find difficult or impossible to resist. More than 2 percent of people are affected by obsessive thoughts and compulsive behaviors which severely impair daily activities. A treatment option for severe cases is deep brain stimulation, a technique which is also used in other disorders, such as Parkinson's disease. Deep brain stimulation involves the implantation of tiny electrodes into structures deep inside the brain.

After implantation, these electrodes deliver very weak electric currents to help rebalance brain activity. By stimulating different areas of the brain, such as a fiber tract within the internal capsule or the subthalamic nucleus, this technique can help improve clinical symptoms in some cases. Treatment success depends on the accurate placement of electrodes and requires millimeter-level precision. The optimal stimulation target for patients with obsessive-compulsive disorders had not previously been identified.

For the first time, a team of researchers have been able to identify a specific nerve bundle which appears to be the optimal target for stimulation. The researchers studied 50 patients with obsessive-compulsive disorder who received treatment at a number of centers around the world. Using magnetic resonance imaging technology both before and after electrode placement, the researchers were able to visualize surrounding fibre tracts and test to see which of these the electrodes were selectively stimulating. "Our analysis shows that optimal results are linked to a very specific nerve bundle. Reliable evidence for this link was found across the cohorts of patients examined in Cologne, Grenoble, London and Madrid," explains the lead author.

The researchers initially examined two cohorts of patients, both of which received deep brain stimulation to the internal capsule or the subthalamic nucleus. These brain structures have a variety of connections to other areas of the brain. And yet, a specific tract situated between the prefrontal cortex and the subthalamic nucleus was identified as a suitable target for stimulation in both of these groups. Precise electrode localizations allowed the researchers to reliably predict treatment outcomes in both of these groups. These results were then replicated in two further, independent cohorts. When comparing their results with other studies, the researchers showed that the target areas described were also located within the tract-target identified in this study.

Describing the way in which these findings could help with electrode implantation, the study's first author, says: "Our results do not alter the original target area, they simply helped us to define it more precisely. What this means is that: so far, we have had to steer our boat toward an island which was shrouded in fog. Now, we can make out the island itself and perhaps even the pier, so we can aim for it with greater accuracy."

All 3D structural analysis data have been made publicly available to researchers around the world. No Charité patients with obsessive-compulsive disorder are receiving treatment using this invasive method of deep brain stimulation. However, the participating research centers continue to share their knowledge and are developing protocols for additional studies to test the newly defined target areas.