Primate neurons have fewer synapses than mice in visual cortex 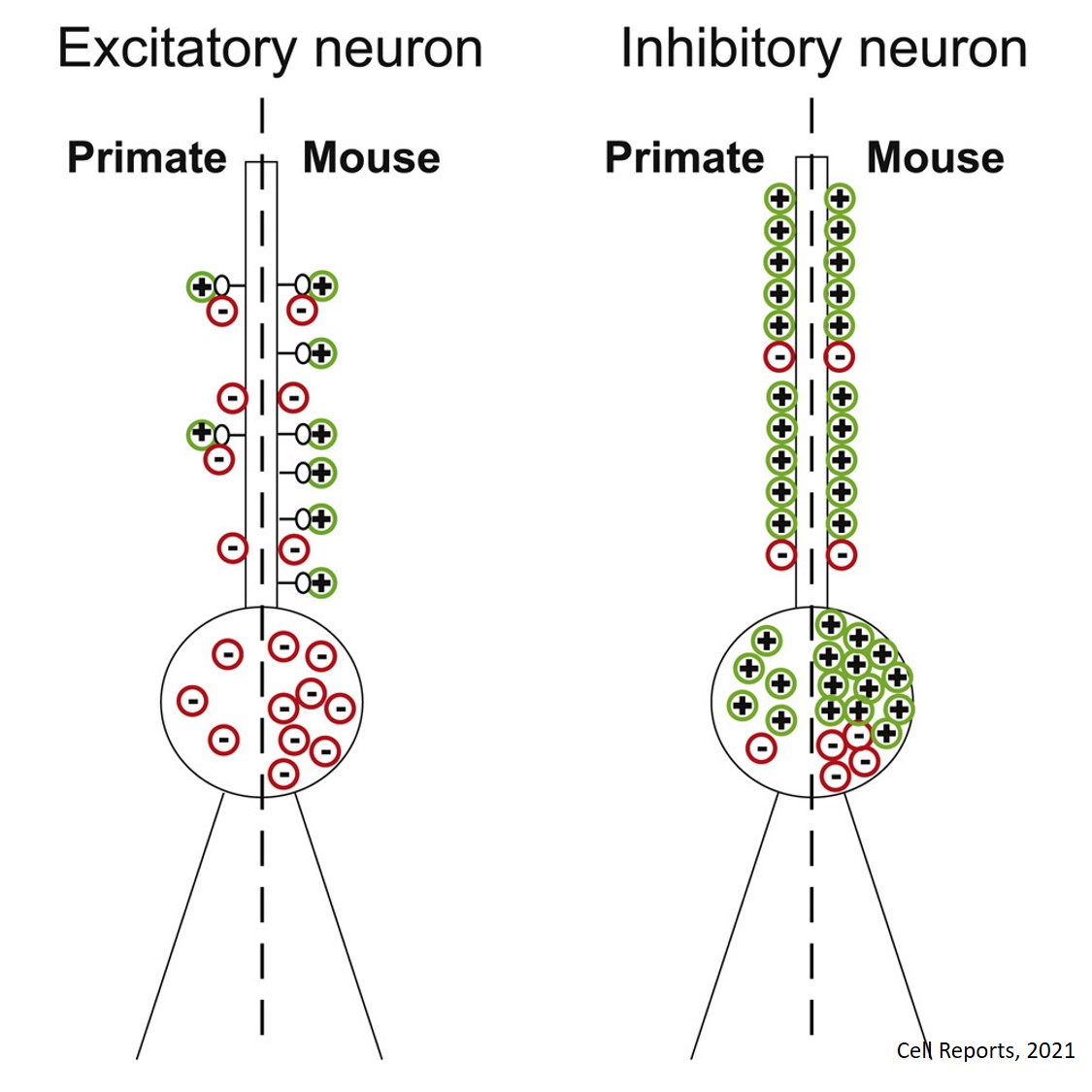 Primates are generally considered smarter than mice. But in a surprising finding, neuroscience researchers have discovered that mice actually have more synapses connecting the neurons in their brains.

In a study comparing the brains of macaques and mice at the synaptic level, the researchers found that the primates had far fewer synapses per neuron compared to the rodents, in both excitatory and inhibitory neurons in layer 2/3 of the primary visual cortex. Using artificial recurrent neural network modeling, the team was further able to determine that the metabolic cost of building and maintaining synapses likely drives larger neural networks to be sparser, as seen in primates versus mouse neurons. The results were published in Cell Reports.

The research team leveraged recent advances in electron microscopy, as well as existing publicly available data sets, to compare the connectivity in both species. They chose to examine both excitatory and inhibitory synapses, as most previous research had focused on only excitatory synapses. Focusing on layer 2/3 neurons in the adult primary visual cortex made it easier to compare across species, as these neurons have distinct morphologies that are similar in both primates and mice.

After reconstructing the microscopy images and measuring the shapes of 107 macaque neurons and 81 mouse neurons, the researchers identified nearly 6,000 synapses in the macaque samples and over 9,700 synapses in the mouse samples. Upon comparing the datasets, they found that primate neurons receive two to five times fewer excitatory and inhibitory synaptic connections than similar mouse neurons.

“The reason why this is surprising is that it there’s this quiet sort of assumption among neuroscientists and, I think, people in general that having more neuronal connections means that you’re smarter,” said the a staff scientist. “This work clearly shows that while there are more total connections in the primate brain overall because there are more neurons, if you look on a per-neuron basis, primates actually have fewer synapses. But we know that primate neurons can perform computations that mouse neurons can’t. This raises interesting questions, like what are the ramifications of building a larger neuronal network, like the ones seen in primates?”

“We’ve had this expectation forever that the density of synapses in primates would be similar to what’s seen in rodents, or maybe even higher because there’s more space and more neurons in the primate brain,” said another author. “In light of the surprising finding, we thought about why primate neurons would make fewer connections than expected. And we thought that perhaps it was driven by evolutionary forces — that perhaps the energetic costs associated with maintaining a brain might be driving this difference. So we developed artificial neural network models and trained them to do tasks while we gave them constraints inspired by the metabolic costs that are faced by actual brains, to see how that affects the connectivity that arises in the networks that result.”

The modeling considered two potential metabolic costs: the cost of the individual electrical signals sent by neurons, called action potentials, which are energetically very expensive, and the cost of building and maintaining the synapses between different cells. What they found was that as the number of neurons increased in the network, growing metabolic constraints made it more difficult to create and maintain the connections between cells, leading to a reduced density of synapses.

“The brain is only about 2.5% of our total body mass, but requires about 20% of the body’s total energy,” said the author. “It’s a very costly organ. It’s believed that the majority of that energy is spent on the synapses, both in the energy to communicate across the synapses but also to build and maintain them. As the brain gets bigger, with more neurons, then there are likely to be trade-offs, metabolically speaking.”

The results, the researchers say, will help inform future research in both primates and mice, as well as comparisons between the two. “Fundamentally, I think all neuroscientists want to understand what makes us human — what separates us from other primates, and from mice,” said the author. “We’re working on connectomics, which is focused on understanding neuroanatomy at the level of individual connections. Before this, it hadn’t been well described whether there were differences at the level of connections that might give us clues as to how evolution builds different kinds of brains. Every brain is neurons, and every neuron connects to and communicates with other neurons in a stereotypic way. How does evolution work within those constraints to build different kinds of brains? You have to study mice, and primates, and a bunch of other species to really start to understand what’s going on here.”

The authors also point out that understanding the differences between species can help clarify general principles of the brain to better understand behavior. “The comparative approach allows us to think carefully about the anatomy of the brain in the context of the specific behaviors of an organism,” the author said. “No one treats a mouse and a primate the same way; they behave differently. These fundamental observations of the anatomical differences between the two may allow us to extract general principles that can be applied across species, as well as what is unique for each animal.”

As an example, understanding synaptic density — and in particular the ratio of excitatory to inhibitory synapses — can inform research on neurological conditions such as Parkinson’s disease and autism. “If we only measure excitatory/inhibitory ratio in mice, and we assume it’s the same across all species, how does that affect our understanding of the disease?” said the author. “We found differences in the excitatory/inhibitory ratio in primates versus mice; what are the implications about how we translate these models to humans?”

Future research will include examining similar questions during brain development, working to understand how synapse number and density affect the network over time, and how that development differs between mice and primates.