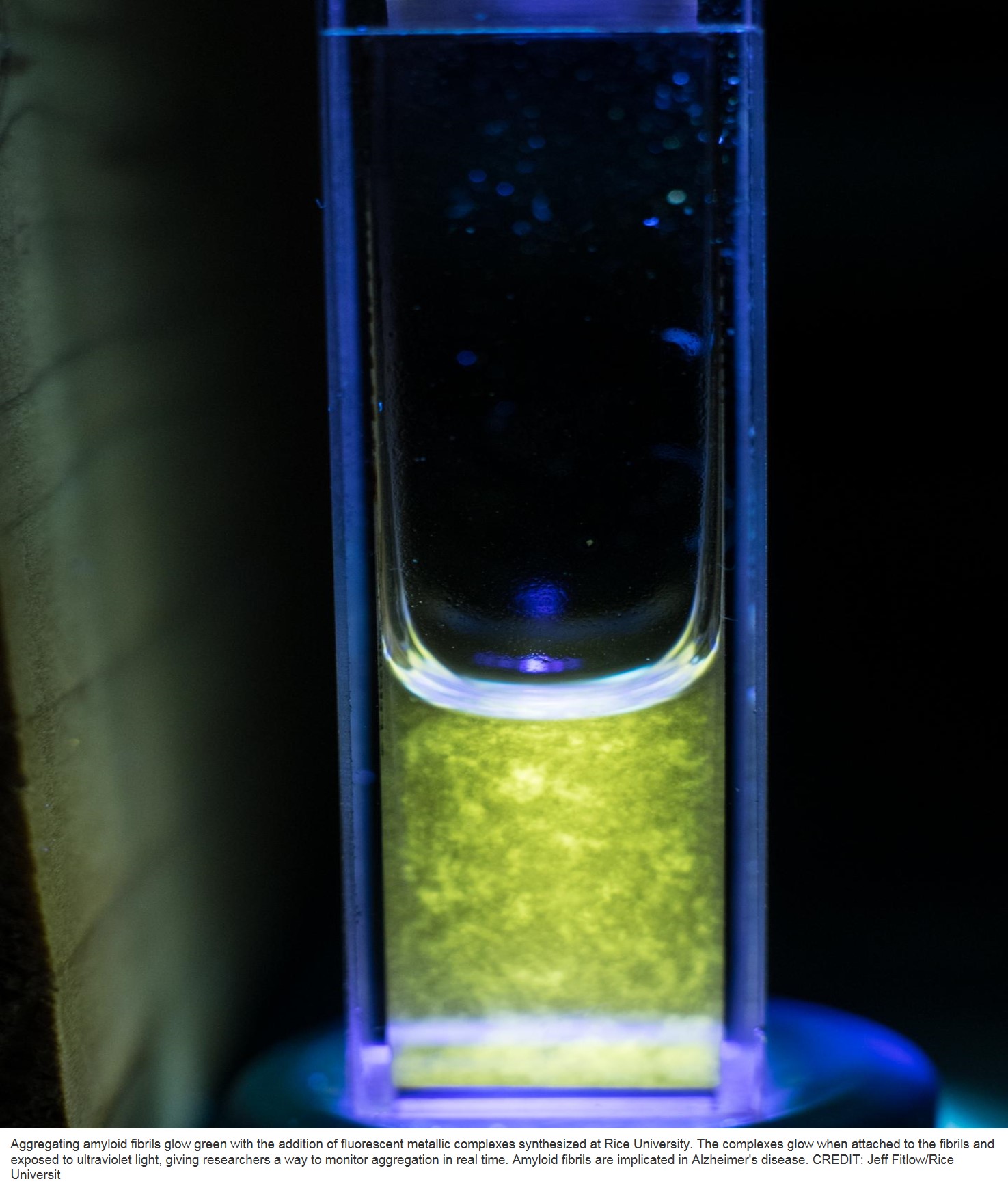 A metallic molecule being studied at Rice University begins to glow when bound to amyloid protein fibrils of the sort implicated in Alzheimer's disease. When triggered with ultraviolet light, the molecule glows much brighter, which enables real-time monitoring of amyloid fibrils as they aggregate in lab experiments.

Rice chemist said such a powerful probe could be a boon to researchers seeking a way to break up amyloid plaques, which form in the brains of patients with Alzheimer's. The lab reported on the light-switching molecule in the Journal of the American Chemical Society.

The team study dyes made of metallic complexes that luminesce when attached to amyloid fibrils or DNA. They discovered that when rhenium dipyridophenazine complexes bind with an amyloid fibril in a test tube and are excited with ultraviolet light, the synthetic molecules increase their natural photoluminescence by several orders of magnitude.

"Most dyes decrease their fluorescence upon continuous excitation because they photobleach," author said. "This dye does the complete opposite, increasing its emission even more every time you excite it." The effect isn't nearly as strong if the metallic molecule is either floating in a solution or attached to single amyloid strands, author said.

The effect is seen in two stages, he said. The probe incorporates a hydrophobic part that naturally binds to aggregating fibrils and emits light when it does, giving researchers a clear signal that aggregation is happening. Exciting the combined aggregate and probe with ultraviolet light then boosts the light output more than a hundredfold.

The Rice researchers suspect the dramatic increase happens when reactive oxygen species attack the amino acids on the amyloid beta fibril that would normally quench the luminescence of the metal complex.

"Our hypothesis is that upon ultraviolet irradiation, our (rhenium) metal complex produces reactive oxygen species and they're more aggressive than conventional molecular oxygen," another author said. "There are reports that rhenium complexes are capable of activating oxygen from one form to a more aggressive form in solution."

"That's one of our theories," senior author added. "We still don't understand well what is happening. But we know that besides increasing the emission intensity, the complex also chemically modifies the (amyloid) protein."

Author said experiments that removed as much oxygen as possible eliminated the enhanced fluorescence effect. The lab stepped back to test an earlier metallic complex based on ruthenium, which also showed emission when attached to amyloid fibrils. It did not show enhanced emission under ultraviolet light.

"We thought the effect might be happening with ruthenium and we had completely missed it, so we ran a control experiment and nothing happened," authorcsaid.

That makes the rhenium complex unique so far. It also gives researchers the opportunity to learn more about amyloid beta proteins and the mechanics of aggregation, author said.

"We've always been interested in knowing where these complexes bind," author said. "If they oxidize amyloid beta in the periphery of their binding site, then by tracking the place of oxidation we will know the place of binding. That is called footprinting. It will allow us to specifically explore binding and how chemical modification of the surface of the protein would affect factors like toxicity and aggregation."