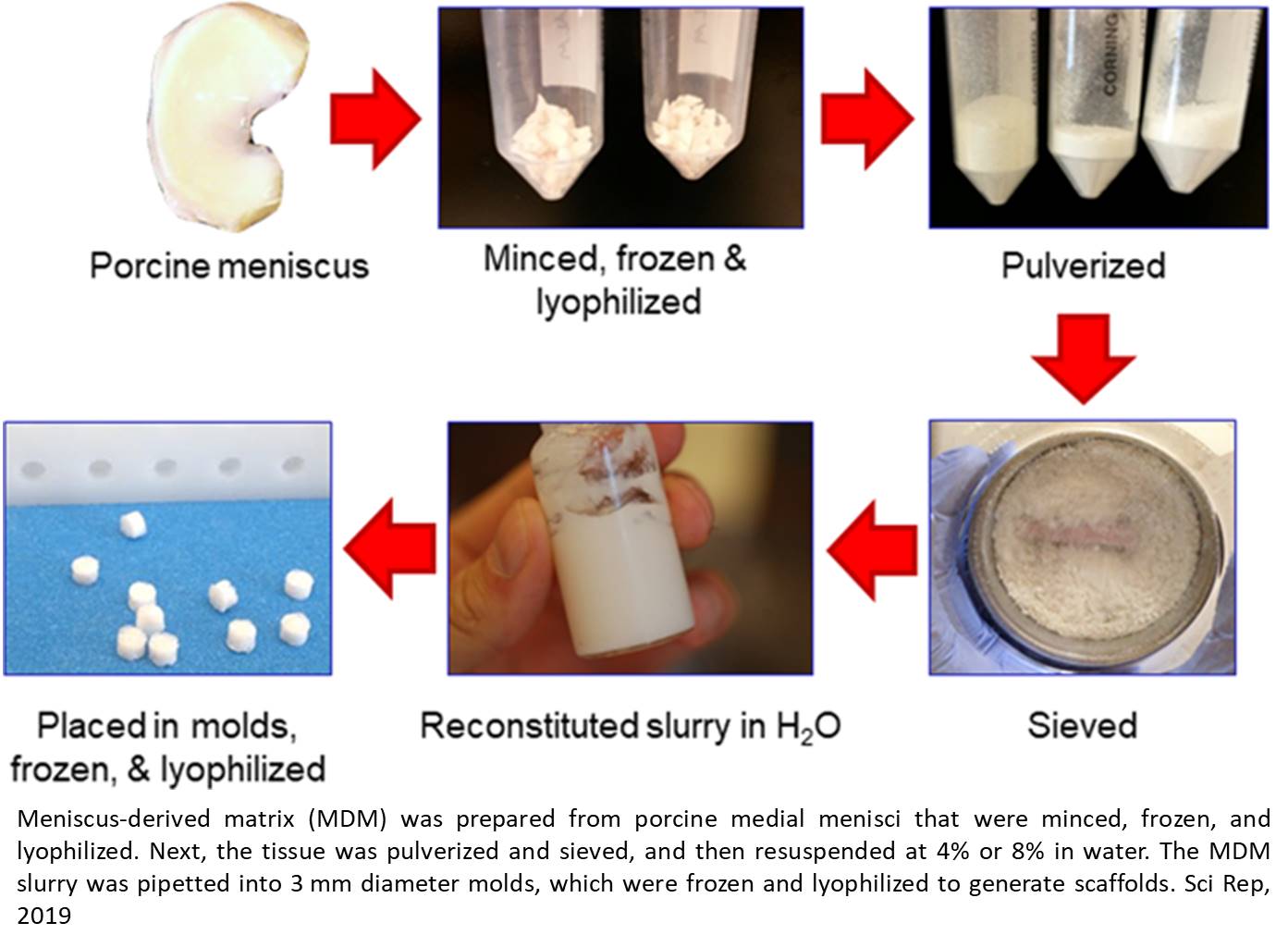 About a million times a year, Americans with a torn meniscus in their knee undergo surgery in hopes of a repair. Certain tears can't be fixed or won't heal well, and many patients later suffer osteoarthritis from the injury.

Scientists have tried developing scaffolds or structures from various materials, including plastic and textile fibers, to lay a foundation for new cells. In a paper published in the journal Scientific Reports, scientists describe a more organic model -- a scaffold derived from a pig's meniscus, which performed better in lab tests than healing without a scaffold.

"A partial meniscus removal is one of the most commonly performed orthopedic surgeries in the U.S.," said the senior author of the paper.

The damaged tissue must be cut out because it's causing pain or catching, but when the tissue comes out it also alters load-bearing in the knee and often leads to osteoarthritis, so it would be beneficial to try and heal the meniscus in place using a tool like a scaffold," the senior author said.

In lab tests, repairs aided by the scaffold resulted in a stronger meniscus repair after four weeks compared to a meniscus that went through the natural healing process.

A scaffold could be especially valuable when the meniscus tears near the inside of the crescent-shaped tissue where blood doesn't flow. Without a blood supply, a tear in this section won't mend and the tissue is often removed, the senior author said.

The pig-derived scaffold is advantageous over other models including synthetics, because it is processed without chemicals or enzymes, which helps it retain more natural properties, the senior author said. The porcine meniscus-derived matrix (MDM) scaffolds were tested for their effectiveness in promoting meniscus repair via migration of endogenous meniscus cells from the surrounding meniscus or exogenously seeded human bone marrow-derived mesenchymal stem cells (MSCs).

Both endogenous meniscal cells and MSCs infiltrated the MDM scaffolds. Also, the structure is more porous than other models and even regular meniscus tissue, which allows new cells to move into it more easily to integrate with damaged tissue.

In the absence of exogenous cells, the 8% MDM scaffolds promoted the integrative repair of an in vitro meniscal defect. Dehydrothermal crosslinking and concentration of the MDM influenced the biochemical content and shear strength of repair, demonstrating that the MDM can be tailored to promote tissue repair.

"Cells from the native tissue appear to be naturally attracted to the scaffold -- they want to move into it," the senior author said. "Hopefully, this will lead one day to a scaffold being placed into different tears to augment healing and seamlessly integrate the pieces of damaged tissue."

The next step is testing the scaffold in animal models and eventually in humans, the author said. Puberty and stress reactivity in humans Oligodendrocytes during human brain evolution and their association with neuropsychiatric disorders