Soft, Microfluidic 'Lab On The Skin' for Sweat Analysis 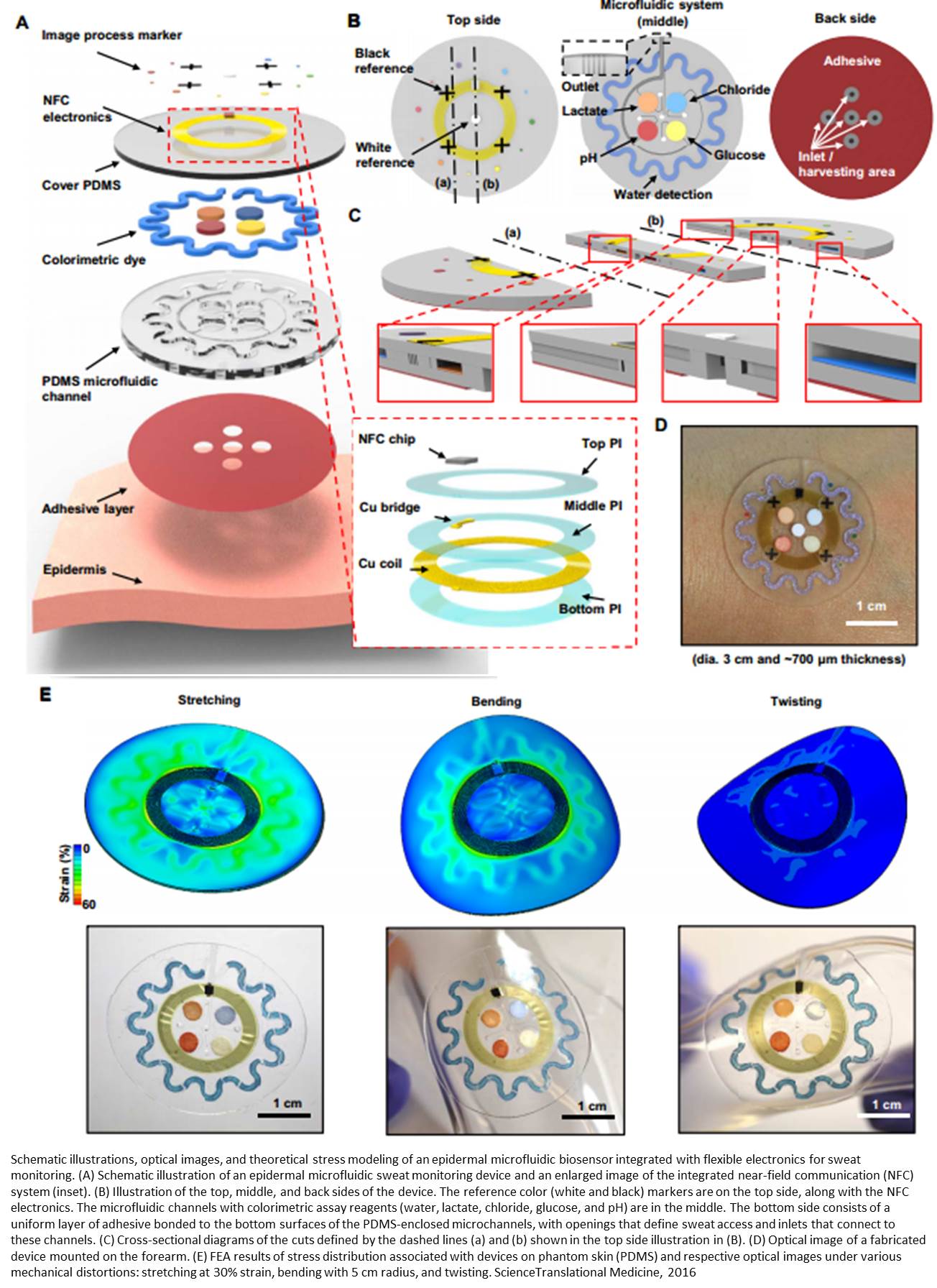 A Northwestern University research team has developed a first-of-its-kind soft, flexible microfluidic device that easily adheres to the skin and measures the wearer's sweat to show how his or her body is responding to exercise.

A little larger than a quarter and about the same thickness, the simple, low-cost device analyzes key biomarkers to help a person decide quickly if any adjustments, such as drinking more water or replenishing electrolytes, need to be made or if something is medically awry.

Designed for one-time use of a few hours, the device, placed directly on the skin of the forearm or back, even detects the presence of a biomarker for cystic fibrosis. In the future, it may be more broadly used for disease diagnosis.

"The sweat analysis platform we developed will allow people to monitor their health on the spot without the need for a blood sampling and with integrated electronics that do not require a battery but still enable wireless connection to a smartphone," author said.

In a study of accuracy and durability, the device was tested on two different groups of athletes: one cycling indoors in a fitness center under controlled conditions and the other participating in the El Tour de Tucson, a long-distance bicycle race in arid and complex conditions. The researchers placed the device on the arms and backs of the athletes to capture sweat.

Details of the versatile platform for sweat analysis is published in the journal Science Translational Medicine.

During moderate or vigorous exercise, sweat winds through the tiny microscopic channels of the device and into four different small, circular compartments. In the compartments, reactions with chemical reagents result in visible color changes in ways that quantitatively relate to pH and concentrations of glucose, chloride and lactate.

When a smartphone is brought into proximity with the device, the wireless electronics trigger an app that captures a photo of the device and analyzes the image to yield data on the biomarker concentrations.

"We chose these four biomarkers because they provide a characteristic profile that's relevant for health status determination," said the author. "The device also can determine sweat rate and loss, and it can store samples for subsequent laboratory analysis, if necessary."

In the group that cycled indoors, the researchers compared the new device's biomarker readouts to conventional laboratory analysis of the same sweat and found the two sets of results agreed with each other. (Conventional methods include capturing sweat with absorbent patches taped to the skin and analyzing them off-site.)

With the long-distance cyclists, the researchers tested the durability of the device in the complex and unpredictable conditions of the desert. They found the devices to be robust: They stayed adhered to the athletes' skin, did not leak and provided the kind of quality information the researchers sought.