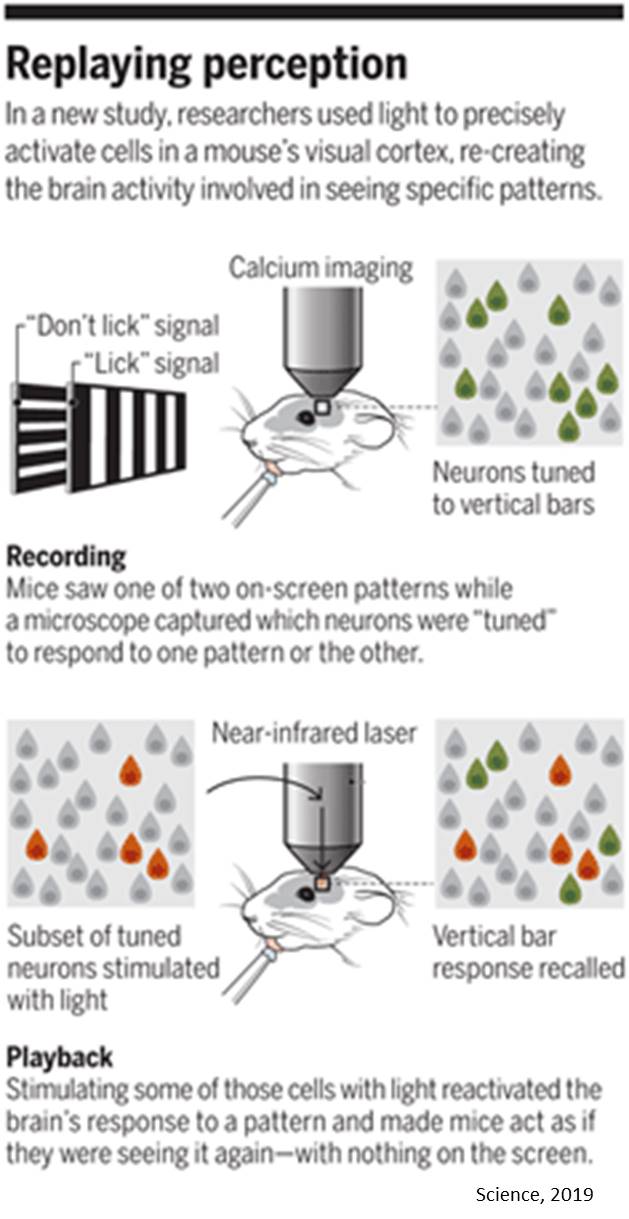 Hallucinations are spooky and, fortunately, fairly rare. But, a new study suggests, the real question isn't so much why some people occasionally experience them. It's why all of us aren't hallucinating all the time.

In the study, neuroscientists stimulated nerve cells in the visual cortex of mice to induce an illusory image in the animals' minds. The scientists needed to stimulate a surprisingly small number of nerve cells, or neurons, in order to generate the perception, which caused the mice to behave in a particular way.

"Back in 2012, we had described the ability to control the activity of individually selected neurons in an awake, alert animal," said the senior author. "Now, for the first time, we've been able to advance this capability to control multiple individually specified cells at once, and make an animal perceive something specific that in fact is not really there -- and behave accordingly."

The study, to be published in Science, holds implications for obtaining a better understanding of natural information processing in the brain, as well as psychiatric disorders such as schizophrenia, and points to the possibility of designing neural prosthetic devices with single-cell resolution.

In the new study, researchers inserted a combination of two genes into large numbers of neurons in the visual cortex of lab mice. One gene encoded a light-sensitive protein that caused the neuron to fire in response to a pulse of laser light of a narrowly defined color -- in this case, in the infrared spectrum. The other gene encoded a fluorescent protein that glowed green whenever the neuron was active.

The scientists created cranial windows in the mice by removing a portion of the animals' skulls to expose part of the visual cortex, which in both mice and humans is responsible for processing information relayed from the retina. The investigators protected this exposed area with a clear glass covering. They could then use a device they developed for the purpose of the study to project holograms -- three-dimensional configurations of targeted photons -- onto, and into, the visual cortex. These photons would land at precise spots along specific neurons. The researchers could monitor the resulting activity of nearly all individual neurons in two distinct layers of the cerebral cortex spanning about 1 square millimeter and containing on the order of several thousand neurons.

With their heads fixed in a comfortable position, the mice were shown random series of horizontal and vertical bars displayed on a screen. The researchers observed and recorded which neurons in the exposed visual cortex were preferentially activated by one or the other orientation. From these results, the scientists were able to identify dispersed populations of individual neurons that were "tuned" to either horizontal or vertical visual displays.

They were then able to "play back" these recordings in the form of holograms that produced spots of infrared light on just neurons that were responsive to horizontal, or to vertical, bars. The resulting downstream neuronal activity, even at locations relatively far from the stimulated neurons, was quite similar to that observed when the natural stimulus -- a black horizontal or vertical bar on a white background -- was displayed on the screen.

The scientists trained the mice to lick the end of a nearby tube for water when they saw a vertical bar but not when they saw a horizontal one or saw neither. Over the course of several days, as the animals' ability to discriminate between horizontal and vertical bars improved, the scientists gradually reduced the black-white contrast to make the task progressively harder. They found that the mice's performance perked up if the scientists supplemented the visual displays with simultaneous optogenetic stimulation: For example, if an animal's performance deteriorated as a result of a lowered contrast, the investigators could boost its discrimination powers by stimulating neurons previously identified as preferentially disposed to fire in response to a horizontal or vertical bar.

This boost occurred only when the optogenetic stimulation was consistent with the visual stimulation -- for example, a vertical bar display plus stimulation of neurons previously identified as likely to fire in response to vertically oriented bars.

Once the mice had become adept at discriminating between horizontal and vertical bars, the scientists were able to induce tube-licking behavior in the mice simply by projecting the "vertical" holographic program onto the mice's visual cortex. But the mice wouldn't lick the tube if the "horizontal" program was projected instead.

"Not only is the animal doing the same thing, but the brain is, too," the senior author said. "So we know we're either recreating the natural perception or creating something a whole lot like it."

In their early experiments, the scientists had identified numerous neurons as being tuned to either a horizontal or a vertical orientation, but they hadn't yet directly stimulated each of those particular neurons optogenetically. Once the mice were trained, optogenetic stimulation of small numbers of these neurons was enough to get mice to respond with appropriate licking or nonlicking behavior.

The researchers were surprised to find that optogenetically stimulating about 20 neurons -- or fewer in some cases -- selected only for being responsive to the right orientation, could produce the same neuronal activity and animal behavior that displaying the vertical or horizontal bar did.

"It's quite remarkable how few neurons you need to specifically stimulate in an animal to generate a perception," the senior author said.

"A mouse brain has millions of neurons; a human brain has many billions," the senior author said. "If just 20 or so can create a perception, then why are we not hallucinating all the time, due to spurious random activity? Our study shows that the mammalian cortex is somehow poised to be responsive to an amazingly low number of cells without causing spurious perceptions in response to noise."