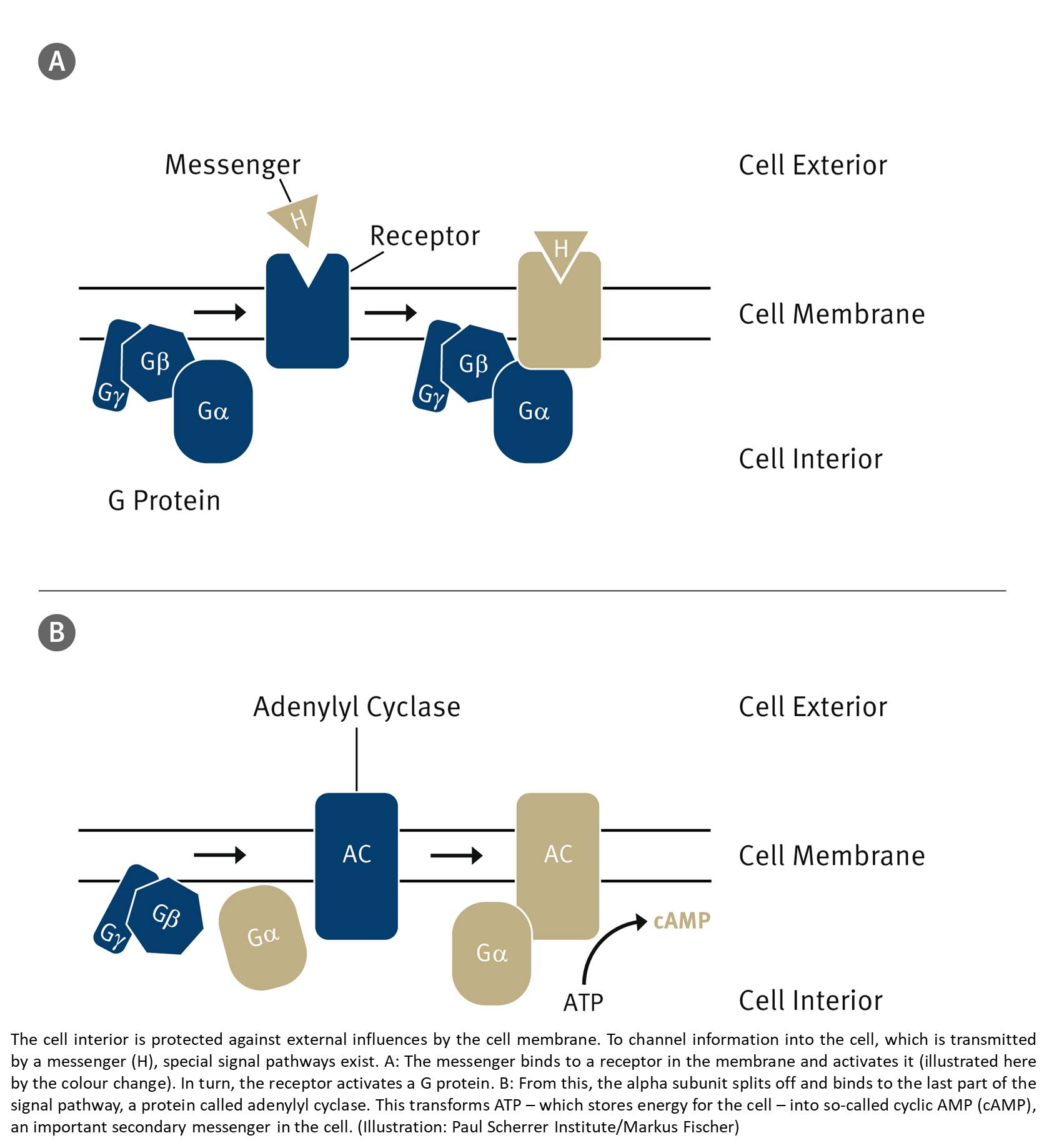 Researchers have elucidated an important part of a signal pathway that transmits information through the cell membrane into the interior of a cell.

The interior of all living cells is separated from the outside world by membranes. These membranes keep the cells intact and protect them from negative influences. But they also act as a barrier for nutrients and information. For this reason, cell membranes contain mechanisms that enable selective access to desired substances or transmit information from external signals into the cell.

An important signal pathway in mammals consists of three components: The first is a receptor that recognises the signal and is activated by it. The second is a so-called G protein that binds to the activated receptor and transmits the signal to one or more effector proteins. In this case, the effector is adenylyl cyclase, the third component of the signal chain. This protein is activated by a subunit of the G protein and produces, in a biochemical reaction, a secondary messenger called cyclic AMP (cAMP).

cAMP triggers various reactions in the cell; for example, it increases the permeability of the membrane to calcium in cardiac cells, leading to an increase in the heart beat rate.

Researchers have now examined one special type of adenylyl cyclase with the help of electron microscopy and have produced the most detailed image to date of this type of membrane protein.

"To understand how signal pathways in the cell work, it is necessary first to know what the components involved look like in detail", says head of the research group. "Our work is an important contribution to elucidating the exact function of adenylyl cyclase in the cAMP signal chain."

"Surprisingly, in determining the structure of the adenylyl cyclase bound to the alpha subunit of the G protein, we discovered that the protein appears to be able to inhibit itself", says the author. One part of the protein is responsible for this self-inhibition. This part blocks the active site of the enzyme and prevents the overproduction of cAMP.

This new insight into the molecular structure of adenylyl cyclase provides a much better understanding of how external signals lead to the controlled production of the important secondary messenger cAMP. The concentration of cAMP in cells plays an important role in the development of cardiovascular diseases, certain tumours, and type 2 diabetes. "In the future, our new findings could make it possible to identify drugs that inhibit or activate the adenylyl cyclase, depending on whether overproduction or lack of cAMP is responsible for a disease", the senior author explains.

The researchers achieved their results using cryo-electron microscopy (cryo-EM). This form of transmission electron microscopy operates at temperatures below -150 degrees Celsius. The sample to be examined is snap frozen in liquid ethane, preserving its natural structure. This method, for which the Nobel Prize for Chemistry was awarded in 2017, is increasingly used in the investigation of biological structures. The resolution achieved by the I researchers in their investigations was 3.4 angstroms. An angstrom is one ten-millionth of a millimetre. Isolated atoms have a radius of 0.3 to 3 angstroms.

The researchers have now published their findings in the scientific journal Science.