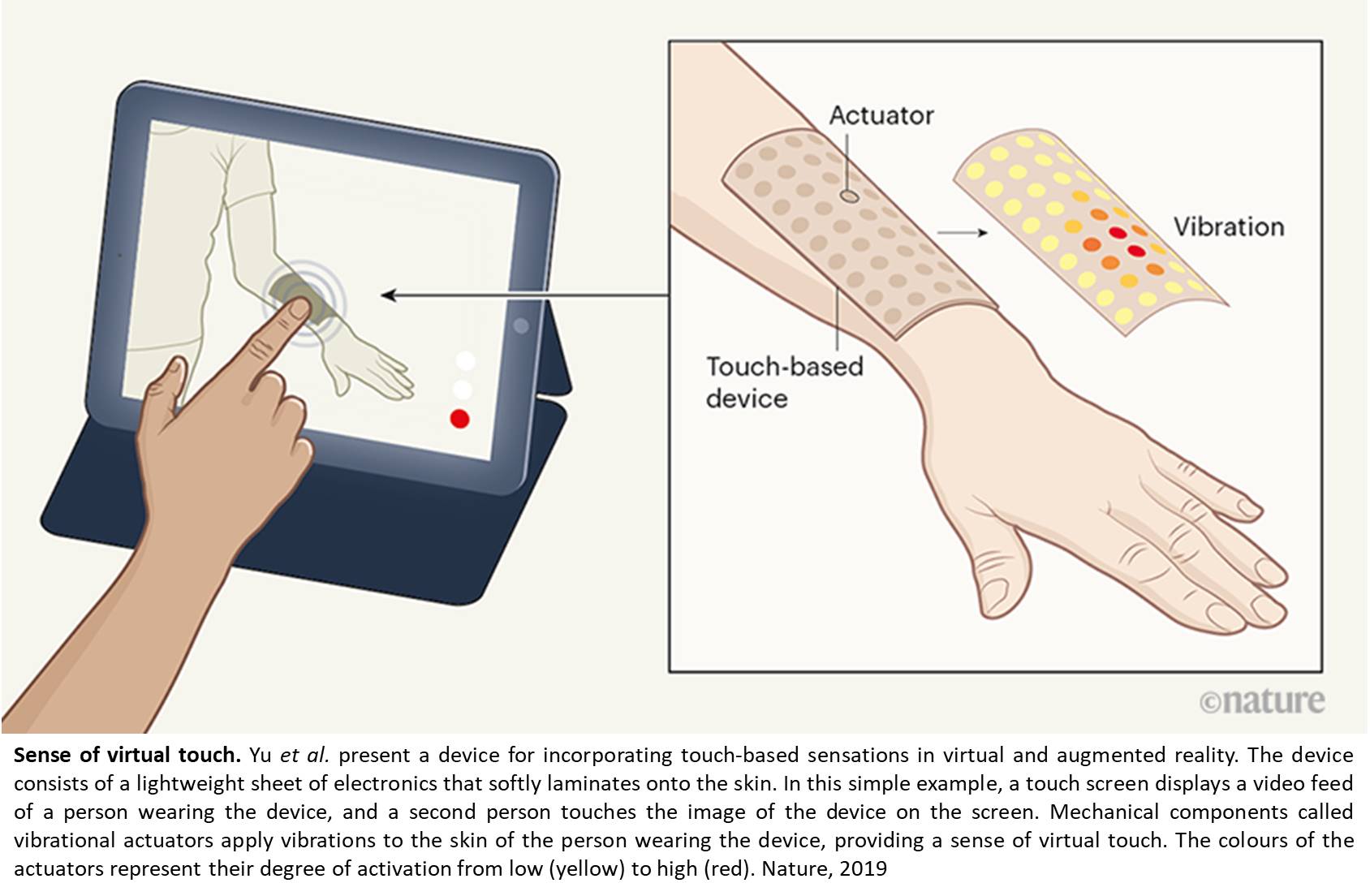 Sensing a hug from your friend through a video call with him/her may become a reality soon. A joint-research team consisted of scientists and engineers has developed a skin-integrated virtual reality (VR) system, which can be controlled and powered wirelessly. The innovation has great application potential in communications, prosthetic control and rehabilitation, as well as gaming and entertainment.

Skin is the largest organ of the body. But compared with the eyes and ears, it is a relatively under-explored sensory interface for VR or augmented reality (AR) technology. At present, VR and AR devices usually relies on vibratory actuation imparted to the skin by electrical motors. But it involves bulky wires and battery packs attaching to the body, limiting its applications.

Researchers have developed an integrated skin VR system which can receive commands wirelessly, and then simulate the "touch" with vibration, overcoming the above shortcomings. The user can feel the touch easily by putting a bandage-like thin, soft and adhesive device on the skin.The research findings were published in the latest issue of the highly prestigious scientific journal Nature.

With the meticulous design based on structural mechanics, this pioneering skin-integrated VR device is comprised of hundreds of functional components, including the actuators simulating touch by millimeter-scale mechanical vibration. These components are integrated into a thin silicone-coated elastomeric layer with a thickness of only 3 mm. It is breathable, reusable and functional at a full range of bending and twisting motions.

More importantly, a collection of chip-scale integrated circuits and antennae embedded inside the skin VR device allows it to be powered and controlled wirelessly.

"The haptic actuators can harvest radio frequency power through the large flexible antenna within a certain distance, so the user wearing the device can move freely without the trouble of wires," the author explained. The system can be operated within a distance of as far as one meter, which is 10 times of existing maximum distance using similar technologies.

And since the new system uses advanced mechanical design, the haptic actuators require less than 2 milliwatts to induce a notable sensory vibration, while the conventional direct-current driven ones need power of about 100 milliwatts to produce the same level of vibration.

"Thus, we solved the difficult problem of transmission by low-power wireless function and significantly increased the distance of the operation for our system. This system not only saves power but also allows users to move more freely without the trouble of wires," the author said.

The team has spent about two years to develop this wireless skin VR system, which involves various disciplines such as mechanical engineering, materials science, biomedicine, physics and chemistry. They are running application trial for the users of prostheses to feel the external environment through the sense of touch and provide feedback to the users. "It can help them to feel the external stimulation with their prosthesis, such as the shape or texture of an object," said the author. In addition, it can be used for developing virtual scenes for clinical applications.

To fabricate an electronic skin which can feel temperature will the next step of their research.