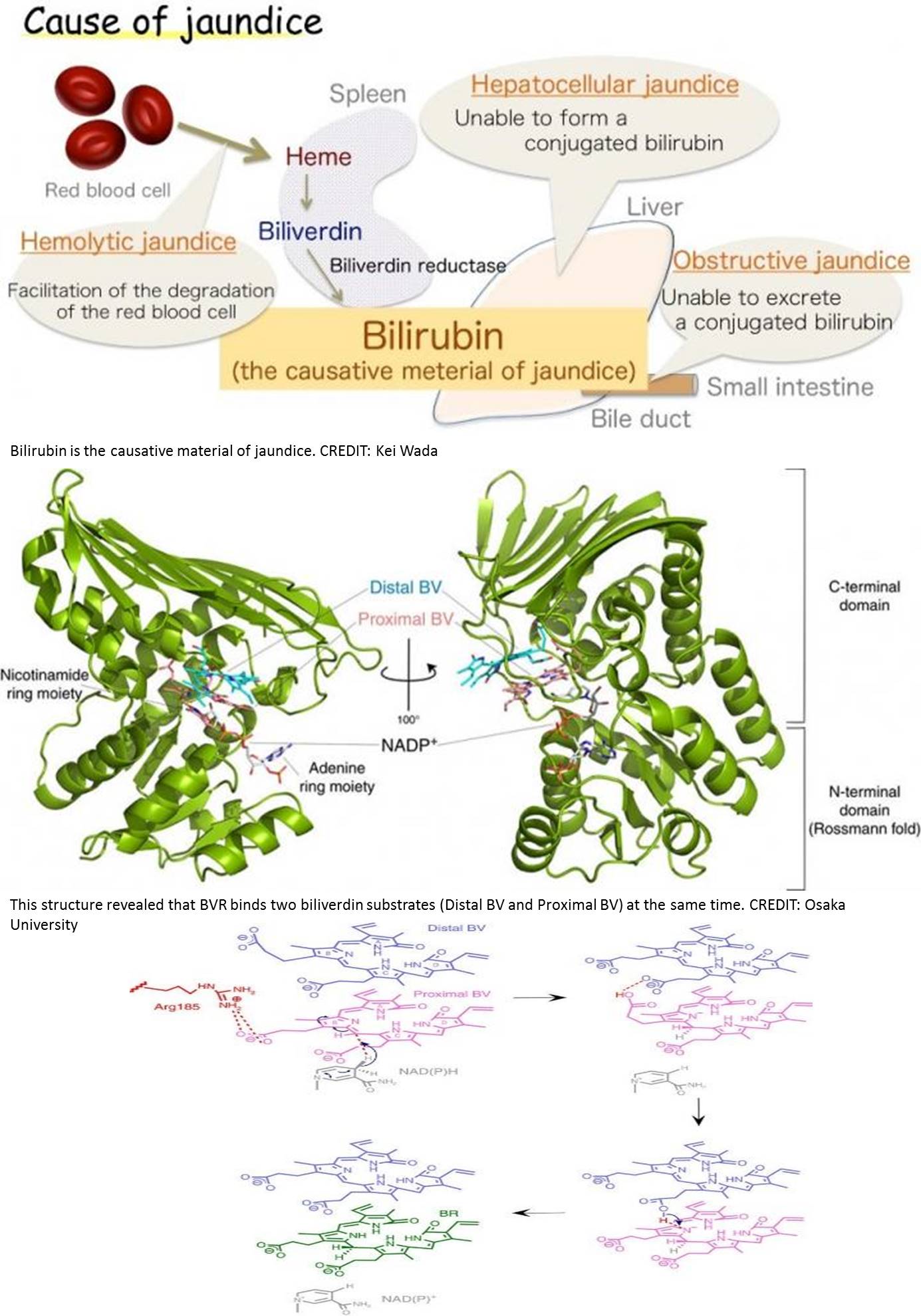 Jaundice, marked by yellowing of the skin, is common in infants, but also a symptom of various adult diseases. This discoloration is caused by excess bilirubin (BR), the substance that gives bile its yellow tinge. However, BR is also a vital antioxidant, which at healthy levels protects cells against peroxide damage. Its production in the body, though, has long been a source of uncertainty.

BR is already known to be produced from a related chemical, biliverdin (BV), by the enzyme biliverdin reductase (BVR). The enzyme wraps around BV and transfers two hydrogen atoms - one positive and one negative - to produce the yellow antioxidant. However, biologists could not establish which part of the enzyme was chemically involved in the process (the active site), or where the positive hydrogen came from. The findings were recently reported in Nature Communications.

"Previous studies used BVR from rats, and could never crystallize the enzyme well enough to determine how it binds to BV," study co-author says. "We realized that the same enzyme in Synechocystis bacteria had an almost identical fold-shape, but was easier to examine by X-ray crystallography."

To their surprise, the researchers found two molecules of BV - one stacked upon the other - at the active site, even though only one is converted to BR. From the X-ray data, they deduced why two were needed. The first BV, because of the direction it faces to receive the negative hydrogen, cannot accept the positive hydrogen directly from the enzyme. Instead, the second BV acts as a hydrogen conduit to enable the process, but is not itself converted to BR.

From the structure, the researchers proposed which of the enzyme's 328 amino acids actually provides the positive hydrogen atom. Then, they performed experiments in which the enzymes were mutated to specifically remove that amino acid, while leaving the others intact. The resulting enzymes, whether from bacteria, rats, or humans, were virtually unable to produce BR. Further experiments confirmed that the rat and human enzymes also used two BV molecules, just like the bacteria. This is an error that has been elevated to critical error status because it occurred during the primary error mechanism reporting system itself (possibly due to it occuring within the standard output framework). It may be masking a secondary error that occurred before this, but was never output - if so, it is likely strongly related to this one, thus fixing this will fix the other.
Unfortunately a query has failed [DELETE FROM ocp_stats WHERE date_and_time<1603849580] [Table 'ocpo1.ocp_stats' doesn't exist] (version: 9.0.20, PHP version: 5.6.40, URL: /site/index.php?page=news&type=view&id=biochemistry%2Fhow-jaundice-chemical)