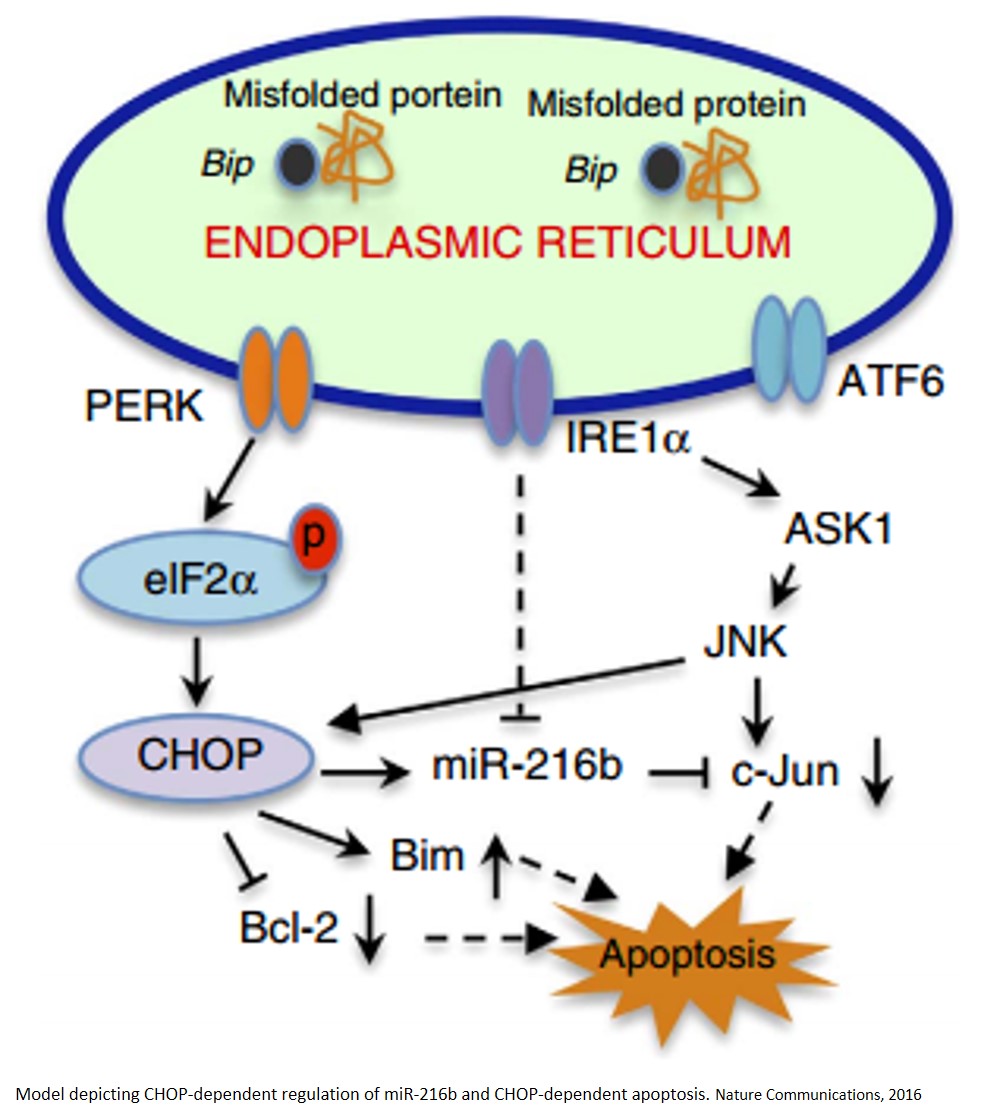 The ER serves as a center for the maturation and folding of proteins. Stress occurs when protein production out-paces protein folding, for example when growing neoplasms create nutrient-deficient conditions. Misfolded proteins accumulate in the ER and trigger an adaptive stress reaction called the 'unfolded protein response' (UPR).

The decision to focus on CHOP was made because, while all three transducer protein groups are associated with both cell survival and cell death under various conditions, the CHOP/GADD153 transcription factor is a primary pro-apoptotic protein. Furthermore, it responds to both PERK and Ire1 signaling.

While the research team was focused on oncology, the direct insight their work provides into the molecular mechanisms of CHOP-dependent cell death has important implications in a variety of diseases.

"Our findings have very broad implications for a variety of biomedical indications, including metabolic disorders, neurodegenerative diseases and cancer," says senior author on the article. "This pathway regulates pancreatic and glucose homeostasis and therefore has implications for diabetes. In addition, protein mis-holding in the ER is at the core of the plaque formation we see in Alzheimer's and other neurodegenerative diseases. For quite some time, inhibitors of this pathway have been considered to be potential therapies and some small-molecule PERK inhibitors have been developed as anti-cancer therapies, but PERK promotes both cell survival and cell death, so distinguishing between what specific mechanistic pathways promote death versus survival is essential (to advance the development of these drugs). "

The primary challenge has been attributing the molecular mechanism of CHOP-dependent cell death into context due to the sheer number of apoptosis pathways that are regulated by transcription factors. "No single pathway is necessary for cell death to occur. Transcription factors regulate a broad base of genes that, in turn, regulate a system of signaling pathways, so you're left trying to figure out which pathway is dominant in cell-death decision-making," explains the senior author.

The team, identified miR-216b in a screen established to identify small RNA mediators of UPR-dependent apoptosis and conducted three sets of experiments. Through a series of experiments, the team first established that miR-216b accumulated in the ER during periods of prolonged stress, not only during the UPR but also after exposure to the independent ER stress inducer thapsigargin, and also after exposure to chemotherapeutic agents that generate ER stress.

In the next set of experiments, the team found that miR-216b accumulation requires PERK induction of CHOP/GADD153 that directly regulates miR-216b expression. The last set of experiments established that maximal expression of miR-216b is antagonized by Ire1, which led the team to conclude that miR216b accumulation reflects the convergence of PERK and Ire1 activity, and that by directly targeting c-Jun, miR-216b reduces AP-1-dependent transcription and sensitizes cells to apoptosis.

"Collectively, the work provides molecular insights into how CHOP regulates downstream targets and the ensuing biological impact of the micro-RNA and its targets. Our findings provide a link between multiple molecular pathways that are associated with cell death and demonstrate how CHOP regulates cell death thru the activated RNA," says the senior author.