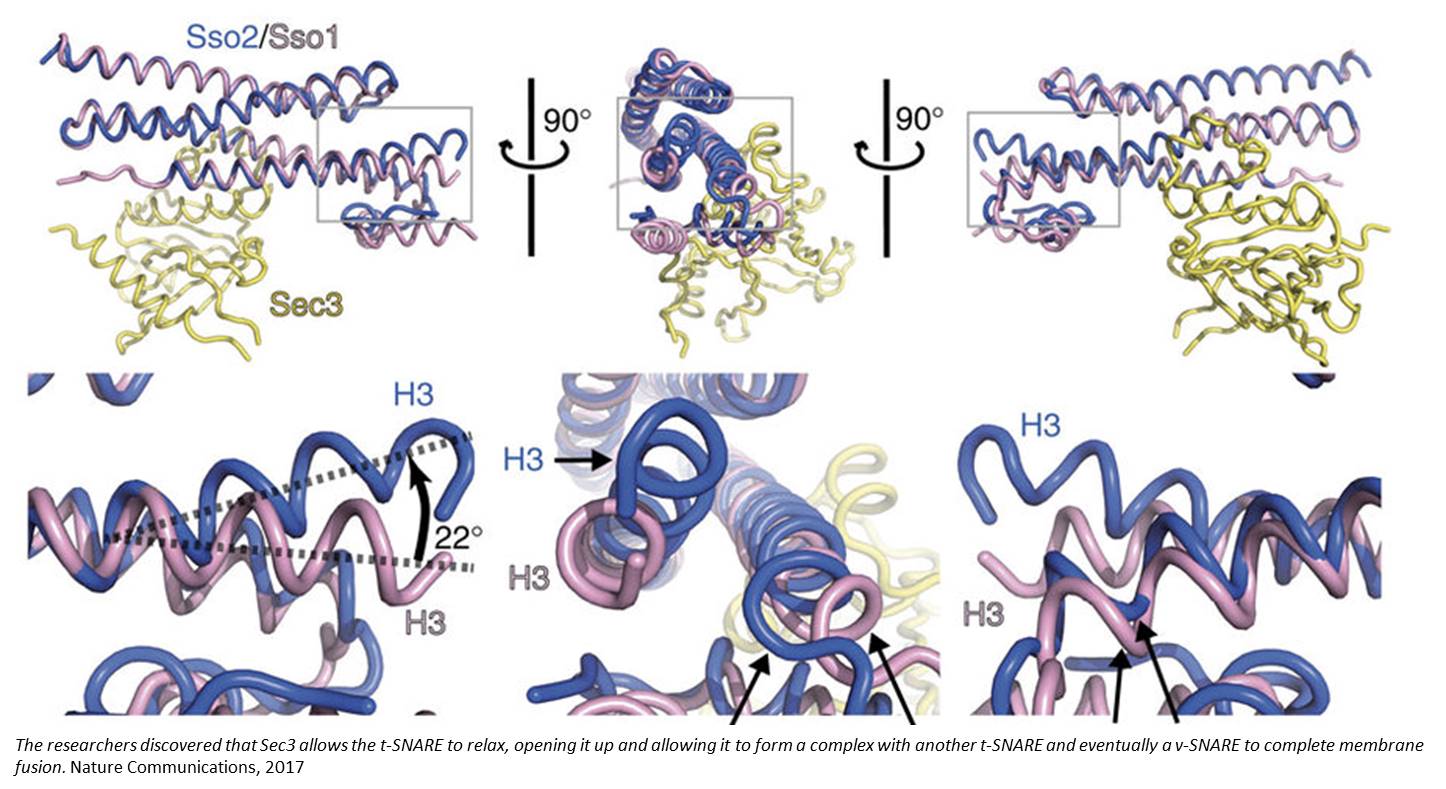 Every time a hormone is released from a cell, every time a neurotransmitter leaps across a synapse to relay a message from one neuron to another, the cell must undergo exocytosis. This is the process responsible for transporting cellular contents via lipid-encapsulated vesicles to the cell surface membrane and then incorporating or secreting them through membrane fusion. Insights into this cellular cargo transport system won three Americans the Nobel Prize in 2013.

Now, a study in the journal Nature Communications has identified a key activation mechanism that leads to vesicle fusion to the membrane.

Exocytosis involves a complex dance of proteins called SNAREs, both v-SNAREs, on the vesicle, and t-SNARES, on the "target" membrane, which in the case of this study is the cell's plasma membrane. The interaction of v-SNAREs and t-SNAREs allows the vesicle to fuse with the membrane, a prerequisite for unloading the vesicle's contents.

Much of the research in this area has been done in yeast cells, a model system commonly used in studying exocytosis. It's known that the SNARE complex in yeast forms between two t-SNAREs that together form a complex with one v-SNARE. But before this occurs, one of the t-SNAREs, syntaxin, tends to form what's known as an autoinhibitory conformation, essentially a closed door that blocks it from interacting with the other t-SNARE. Researchers sought to find out exactly how this "door" was opened to allow the SNARE complex to fully assemble, enabling vesicles to fuse with the plasma membrane.

They first narrowed in on the exocyst, a protein complex that tethers a vesicle to the membrane before fusion occurs. After screening the eight subunits of the exocyst protein complex to see if any interacted with syntaxin responsible for autohibition, they found one that did: Sec3.

When the researchers mixed Sec3 with syntaxin, and then added the other t-SNARE to which syntaxin binds, they found that it significantly accelerated the binding. They also found that its interaction was fleeting; it acted almost like an enzyme, catalyzing the reaction and then departing. They also confirmed that Sec3 sped membrane fusion using a chemically reconstituted lipid system.

Investigating the crystal structure of the interaction allowed the team to determine that Sec3 was able to relax one of the alpha helices at the "hinge" of the autoinhibited t-SNARE, opening it.

The researchers created Sec3 mutants and found that the resulting yeast cells were unable to properly complete exocytosis. Vesicles intended for the plasma membrane instead accumulated within the cell's interior.

Furthermore, the researchers determined that one part of Sec3 was responsible for fusion, while another part was involved in vesicle docking. Mutating different domains of Sec3 led to one defect or the other.