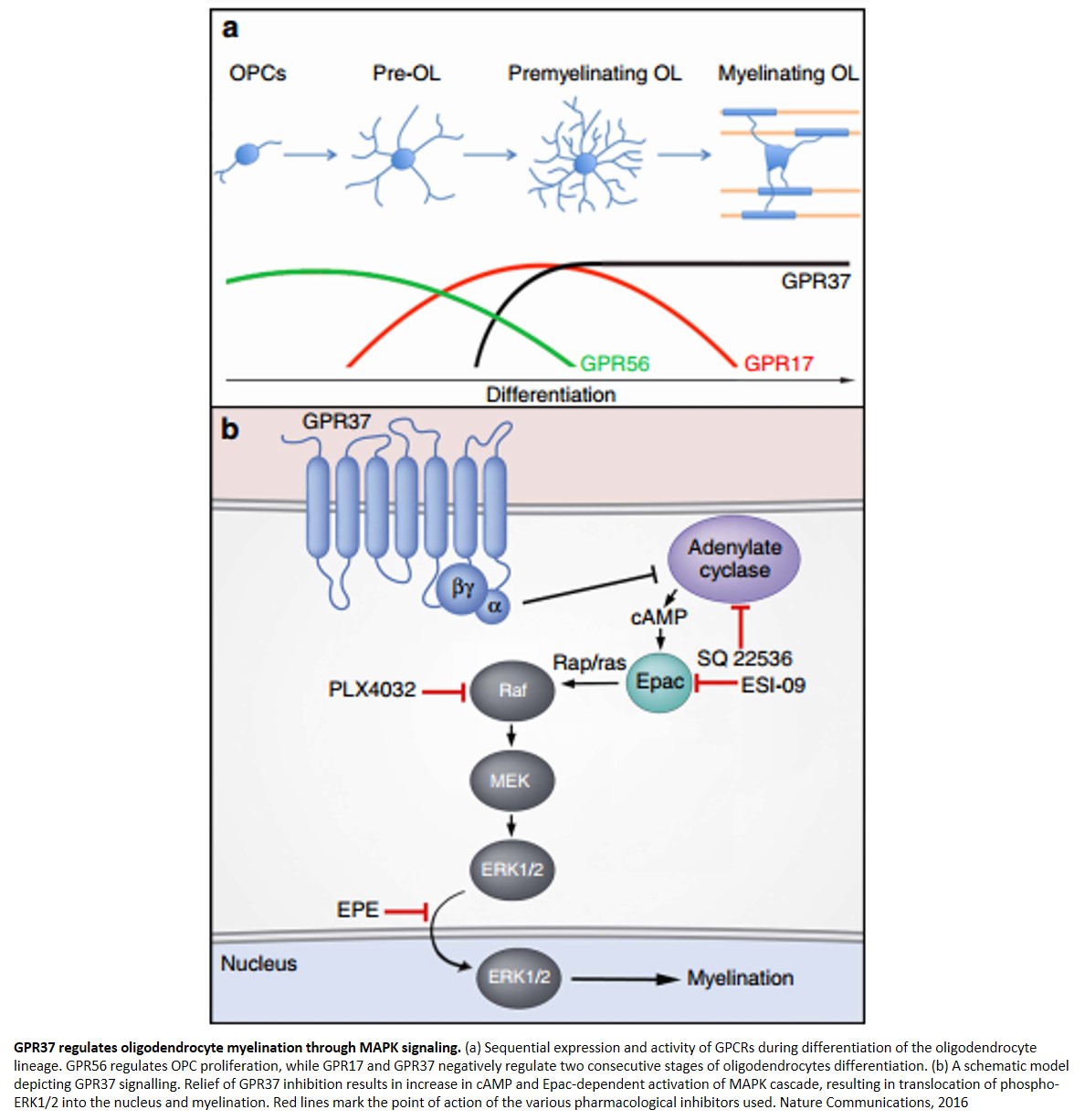 The myelin membrane, produced by Schwann cells in the peripheral nervous system (PNS) and oligodendrocytes in the central nervous system (CNS). Destruction of myelin in the CNS not only leads to devastating white matter diseases such as leukodystrophies and multiple sclerosis but also is associated with psychiatric disorders, and neurodegenerative diseases. Hence, understanding the mechanisms underlying oligodendrocyte development and myelination, as well as their maintenance and ability to remyelinate after damage, is of great clinical interest.
During development, oligodendrocyte precursor cells (OPCs) differentiate into post-mitotic pre-myelinating oligodendrocytes, which later on continue to myelinate. Several signalling pathways control the intricate balance between OPC proliferation and differentiation. Nevertheless, it is not clear whether once OPCs exit the cell cycle and begin to differentiate, additional extrinsic signals are required for the progression from pre-myelinating to myelinating oligodendrocytes.
Members of the G protein-coupled receptors (GPCRs) superfamily are emerging as important regulators of myelination. For example, in the PNS, the initiation of myelination requires the presence of the adhesion-type GPR126 in Schwann cells. PNS myelin formation and maintenance are also modulated by GPR44, which is activated by prostaglandin D2. In the CNS, OPCs proliferation and early differentiation are regulated by the adhesion-type GPR56 protein and GPR17, respectively. Mutations in GPR56 cause bilateral frontoparietal polymicrogyria disease, which is also characterized by white matter reduction. In addition, several other GPCRs were implicated in remyelination, but their roles in myelination during development remains to be determined.
Researchers previously combined microarray analysis with genetic ablation of oligodendrocytes in mice to identify novel signalling pathways involved in late developmental stages of CNS myelination. This approach resulted in the identification of GPCR 37 (Gpr37) as an oligodendrocyte-enriched gene. GPR37 shares significant homology with the receptors of endothelin and bombesin peptides.
As revealed by cell-specific gene expression analysis GPR37 is predominantly found in pre-myelinating and myelinating oligodendrocytes, but not in OPCs. It is also present in certain neuronal subsets, such as dopaminergic neurons in the substantia nigra.
Genetic deletion of Gpr37 does not affect the number of oligodendrocyte precursor cells, but results in precocious oligodendrocyte differentiation and hypermyelination.
GPR37 is also known as parkin-associated endothelin B-like receptor (PAEL-R), which was identified as one of the substrates of the E3 ubiquitin ligase parkin. Although expressed mostly in white matter, the function of GPR37 in myelination has not yet been addressed.
Researchers show that GPR37 is a negative regulator of oligodendrocytes differentiation and myelination and that its function is mediated by suppression of an Epac-dependent activation of MAPK cascade and nuclear translocation of ERK1/2.
The data also suggest that the differentiation of oligodendrocytes to myelinating cells is controlled by the sequential action of inhibitory GPCRs. GPR37 regulates central nervous system myelination by controlling the transition from early-differentiated to mature oligodendrocytes.