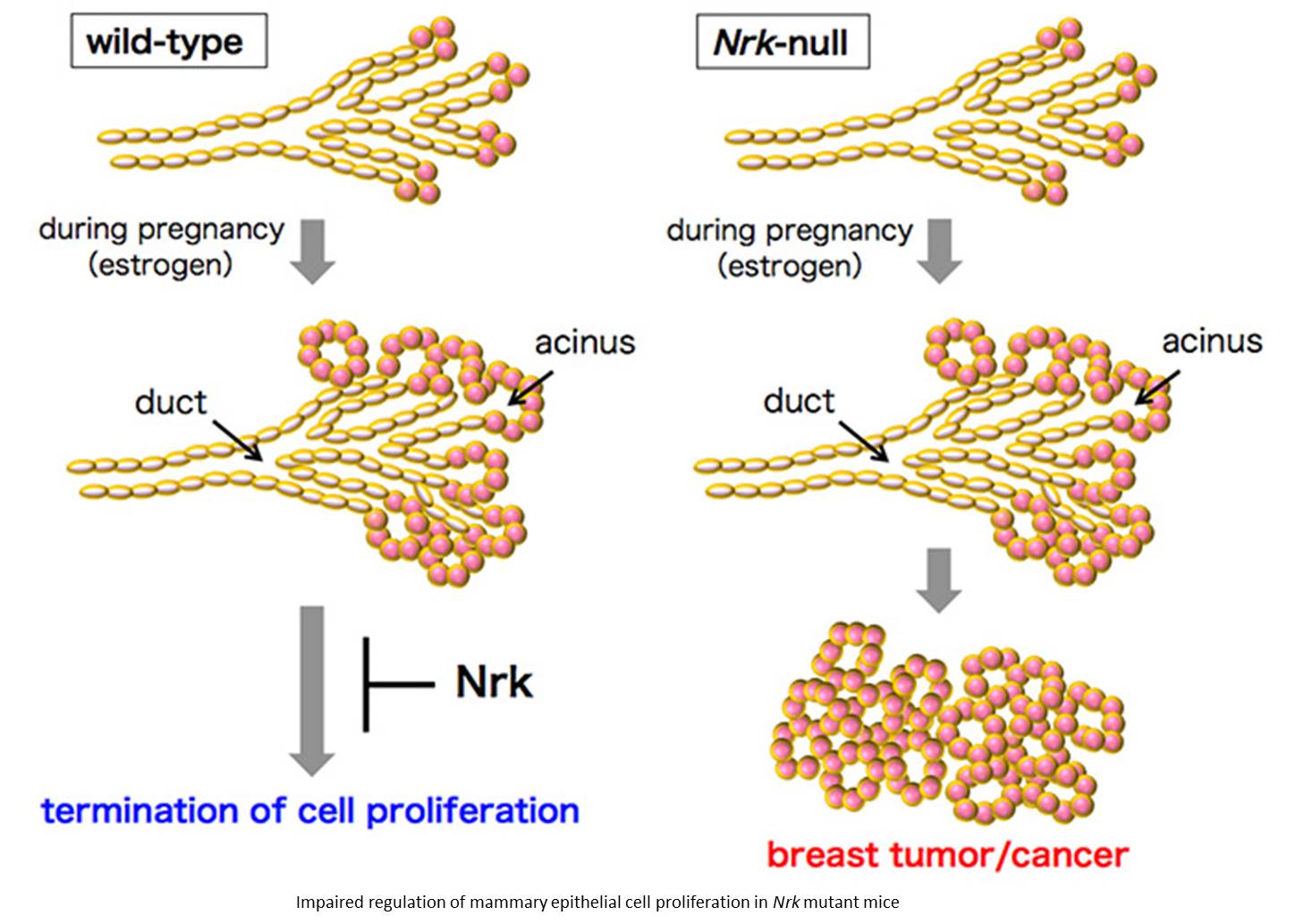 Nrk is a protein kinase encoded in the X chromosome. To study the Nrk function in vivo, the research group generated mutant mice with disrupted Nrk gene, making them unable to produce the Nrk protein. During maintenance of the mutant mouse colony, the researchers noticed that the Nrk mutant mice frequently exhibited breast tumors after repetitive pregnancy/parturition.

The absence of tumors in virgin Nrk mutant mice strongly suggests that the tumorigenesis is closely related to the proliferation of mammary epithelial cells during pregnancy. Histopathological examinations showed that this breast tumor is a non-invasive, relatively benign cancer. In addition, the tumor was positive for estrogen receptor alpha (ER alpha) and cell proliferation marker Ki67, and negative for receptor tyrosine kinase HER2/ErbB2, suggesting that it has features like luminal B type breast cancer in humans.

In Nrk mutant mammary glands, dense clusters of ER alpha-positive mammary epithelial cells were sometimes observed at late stages of pregnancy, which may represent the "bud" of the breast tumor. While Nrk expression was undetectable in the mammary glands of wild-type mice in non-pregnant conditions, it was detected at late stages of pregnancy. This suggests that Nrk is expressed in mammary epithelial cells late in pregnancy in order to terminate their proliferation.

In addition, blood estrogen levels at late stages of pregnancy were found to be about two times higher in Nrk mutant mice than in wild-type mice, suggesting that Nrk is also involved in the regulation of synthesis or secretion of estrogen. In Nrk mutant mice, therefore, mammary tumorigenesis was proposed to be triggered by a combination of dysregulation of proliferation in mammary epithelial cells and excessive blood estrogen.

Collectively, these results suggest that Nrk negatively regulates the estrogen-dependent proliferation of mammary epithelial cells, the disruption of which leads to breast tumors. Humans have an ortholog of the murine Nrk gene, and considering that the gene expression pattern in breast tumor in Nrk mutant mice was similar to that in human luminal B breast cancer, the findings of this study may lead to further understanding of the mechanisms of human breast cancer suppression and to advances in its diagnosis and therapy.