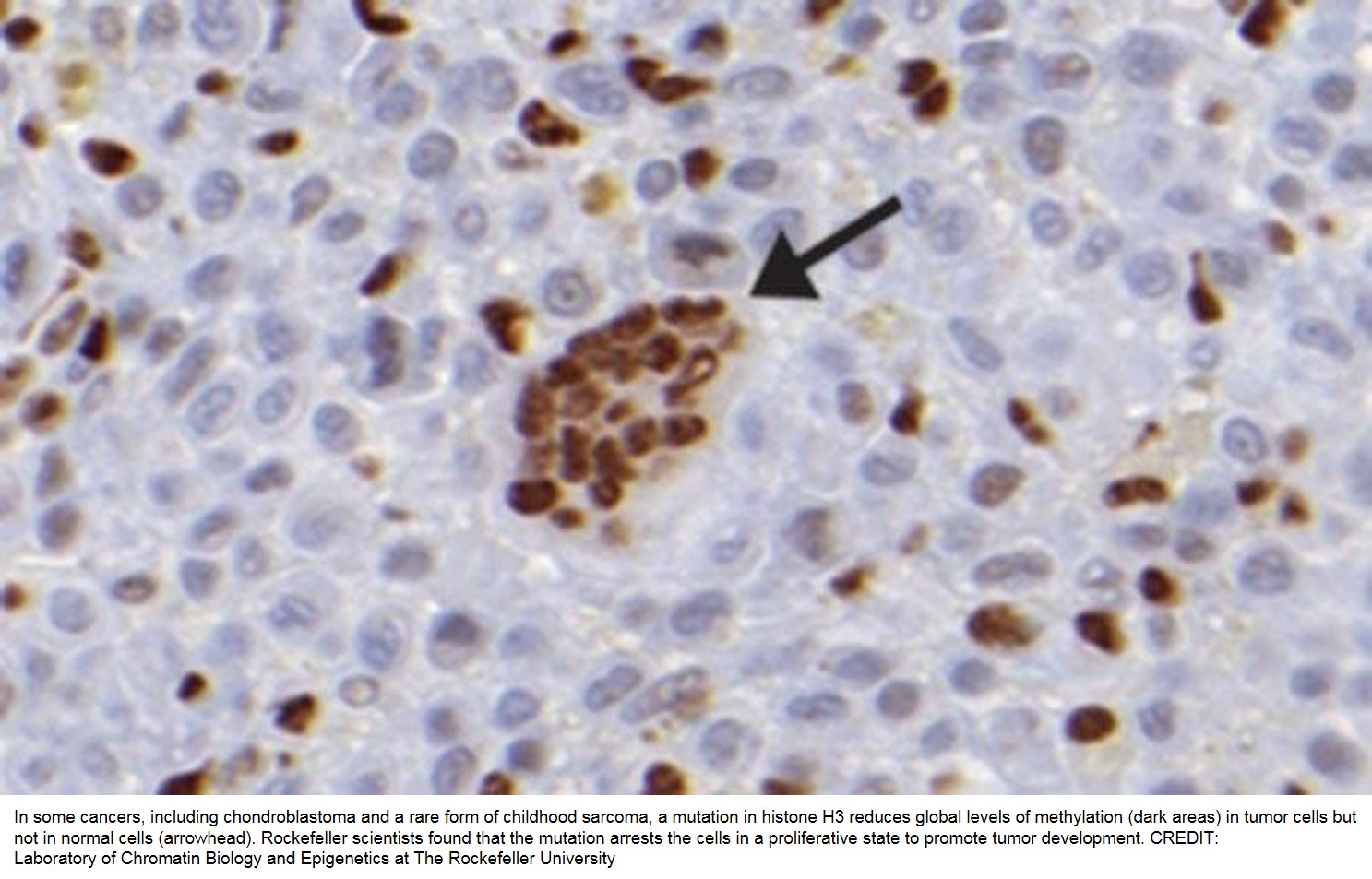 A mutation that affects the proteins that package DNA--without changing the DNA itself--can cause a rare form of cancer, according to new findings in the journal Science.

The mutation is present in histones, the protein scaffolding around which DNA wraps. Researchers have known for some time that histones play a role in switching genes on or off in cells by exposing or covering up various parts of the genome, for instance. But they are just beginning to learn about how changes to these non-DNA structures can affect development and health--a field known as epigenetics--and how they are regulated. Now, for the first time, they've shown that a change to the structure of a histone can trigger a tumor on its own.

In earlier work, other researchers had found that in approximately 95 percent of samples of chondroblastoma, a benign tumor that arises in cartilage typically during adolescence, carry a mutation in a histone protein called H3.

To explore whether and how the mutation causes the tumor, the researchers inserted the H3 histone mutation ( H3 lysine 36–to–methionine, H3K36M) into mouse mesenchymal progenitor cells (MPCs), which generate cartilage, bone and fat. They then watched these mutant cells lose the ability to differentiate in the lab. Next, they injected the mutant cells into living mice, and the animals developed the tumors rich in MPCs, known as an undifferentiated sarcoma.

"Although researchers knew that a certain type of tumor--chondroblastoma--carried a mutation in the H3 histone and no other mutation, this is the first study to show that the mutation indeed causes tumors, even without any other DNA mutation present," says the author.

Next, the researchers tried to understand how the mutation causes the tumors to develop. They found that, when the mutation occurs, the cell becomes locked in a proliferative state--meaning it divides constantly, leading to tumors. Specifically, the mutation inhibits enzymes that normally tag the histone with chemical groups known as methyls, allowing genes to be expressed normally.

In response to this lack of modification, another part of the histone becomes over-modified, or tagged with too many methyl groups. "This leads to an overall resetting of the landscape of chromatin, the complex of DNA and its associated factors, including histones," says co-author.

The findings suggest that researchers should be on the hunt for more mutations in histones that might be driving tumors, says the author. Meanwhile, he and his colleagues are trying to learn more about how this specific mutation in histone H3 causes tumors to develop.