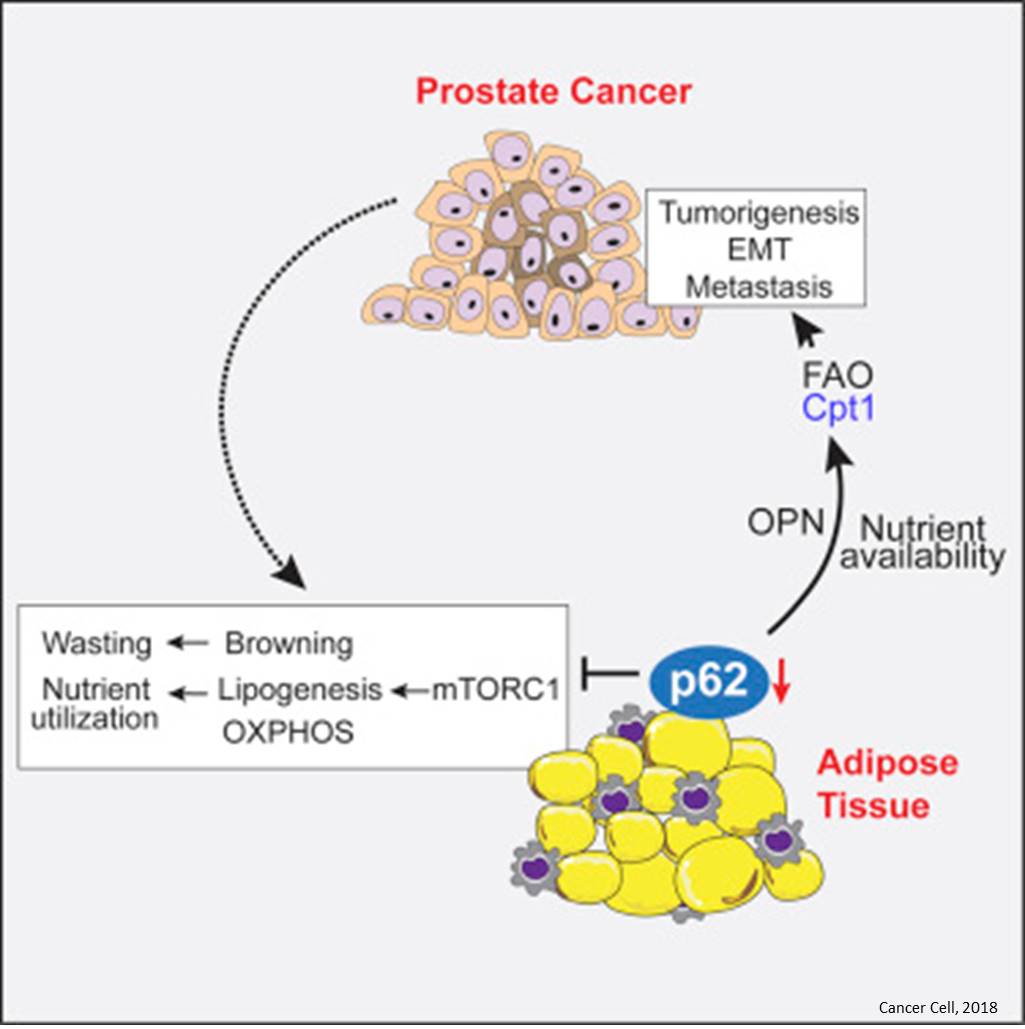 Obesity is the second-leading preventable cause of cancer and represents one of the greatest threats to global human health. But it has not been clear exactly how whole-body metabolism affects tumor formation. In particular, the molecular mechanisms by which fat cells communicate with tumor tissue remain poorly understood.

"This work could lead to better therapies that consider cancer not just as a genetic or cellular disease, but as a whole-body process where tumors communicate with metabolic organs to maintain their unlimited appetite for nutrients," says co-senior study author. "This is a vulnerability that can be targeted therapeutically."

"Most of the studies addressing the role of adiposity and obesity in cancer use mice fed a high-fat diet," says co-senior study author. "Although this mimics some of the situations in patients, it prevents a real understanding of the signaling pathways that control the bidirectional communication between tumors and adipocytes, or fat cells. This is essential if we want to identify therapeutic targets that can be harnessed to prevent the pro-tumorigenic signals emanating from the adipose tissue."

To address this problem, researchers turned to a mouse model of obesity they previously helped to develop. These mice specifically lack p62 in fat cells, leading to increased adiposity and metabolic problems without altering food intake. In the new study, the researchers reveal a central role of p62 in fat tissue-tumor communication, which supports cancer metabolic fitness.

Specifically, they found that p62 deficiency in fat cells promotes the progression and metastasis of prostate cancer in mice by inhibiting a protein complex called mTORC1. The tumors suppress energy-consuming activities such as fat cell development, a metabolic process called oxidative phosphorylation, and fatty acid metabolism in white fat tissue. As a result, more fatty acids and other nutrients are available to support tumor growth. "This metabolic reprograming orchestrated by the loss of p62 in adipocytes appears to help tumors cope with the high-energy demands of an aggressive cancer," author says.

Additional experiments showed that p62 deficiency in fat tissue promotes the synthesis of proteins called osteopontin and Cpt1a, which are critical for prostate cancer proliferation, migration and invasion. These findings are clinically relevant because high levels of osteopontin and Cpt1a are associated with aggressive, metastatic castration-resistant prostate cancer in humans. "The significance is huge because we identify a new set of therapeutic targets that, if modulated, should block the ability of activated adipose tissue to promote tumor malignancy," author says.

According to the authors, the findings suggest that mTOR inhibitors currently used to treat a wide range of cancers may have the unintended consequence of shutting down fat tissue metabolism and fueling tumor growth, at least under certain circumstances. But this possibility needs to be evaluated in future studies. For their own part, the authors plan to further investigate the p62 signaling pathway in patients and identify druggable targets that could be evaluated for their therapeutic potential.

"We need to consider other aspects of cancer therapeutics beyond the better-known genetics," author says. "That is, we need to invest more in the research of cancer metabolism, which deals with the identification of metabolic vulnerabilities that should be common to all types of cancers. This will ultimately lead to better therapies that are less susceptible to resistance, which is an all-too-common problem in oncogene-target approaches."