Methylated microRNA could be an early biomarker for gastrointestinal cancer 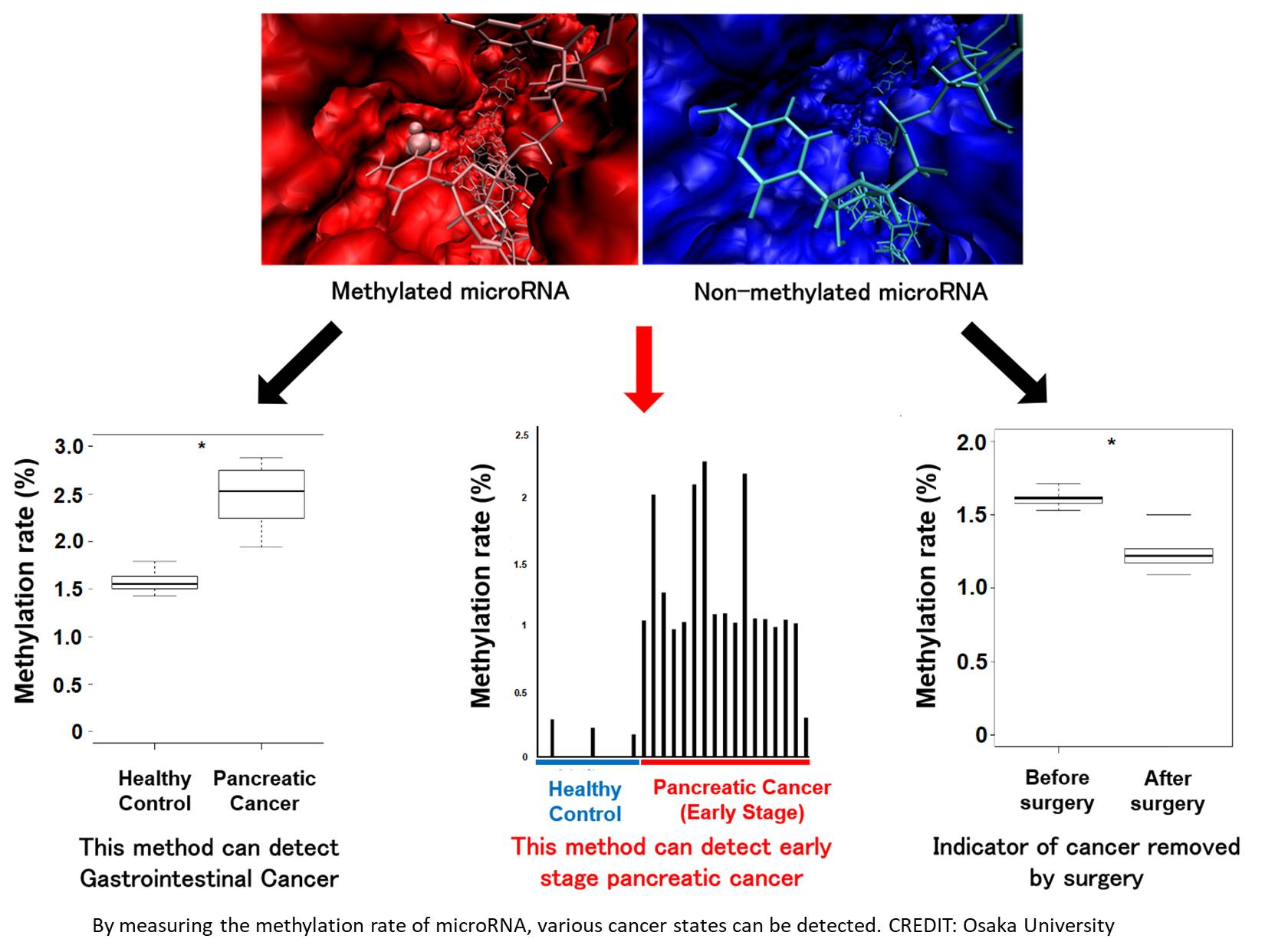 Levels of molecules associated with genetic function, such as microRNA, can be an important indicator of abnormal activity associated with cancer. However, little is known about how different molecules are altered in cancerous cells. Now, researchers have found a new way of distinguishing cancerous from non-cancerous tissues.

In a study published in Nature Communications, researchers revealed that the rate at which microRNA molecules undergo a process called methylation is able to discriminate cancer patients from healthy individuals.

MicroRNAs exhibit abnormal expression in cancer tissues and are stable in body fluids, making them a useful biomarker for cancer. Although microRNAs are generally measured in terms of RNA expression levels, this technique lacks sensitivity and accuracy. Particularly, although microRNAs are measured based on the assumption that they recognize and regulate targets regardless of whether or not they are methylated, their action may actually vary according to methylation status. This is something the researchers aimed to address.

"We found that a small group of mature microRNAs are methylated, which could potentially alter their stability and target recognition," says the co-lead author of the study. "Thus, we wanted to investigate whether methylation could be an important indicator of abnormal microRNA function."

To evaluate the potential of microRNA methylation as a biomarker for early cancer diagnosis, the researchers determined whether levels of methylated RNAs increase or decrease in cancer cells. To do this, they measured microRNA methylation levels in serum samples from patients with pancreatic cancer and healthy controls.

"While we found methylated microRNA in the samples from pancreatic cancer patients, it was either present in very low levels or absent in the control group," explains senior author of the study. "Further, methylation levels in serum samples were able to distinguish early pancreatic cancer patients from healthy controls with extremely high sensitivity and specificity."

The researchers also found that compared with established biomarkers, microRNA methylation was a more powerful indicator of early-stage pancreatic cancer.

"Our data indicate that levels of methylated microRNA may be more useful than those of microRNA as a biomarker for gastrointestinal cancer," says the co-lead author of the study. "Clarifying the mechanisms by which methylation regulates microRNA function throughout the different stages of cancer may facilitate the development of targeted therapies, leading to improved patient outcomes."

As early detection and treatment of cancer can have a substantial effect on patient outcome, new ways to screen for cancer could be vitally important. Given the advantages with respect to existing biomarkers for cancer, it is possible that RNA methylation will be an important component of future systems for early cancer detection.