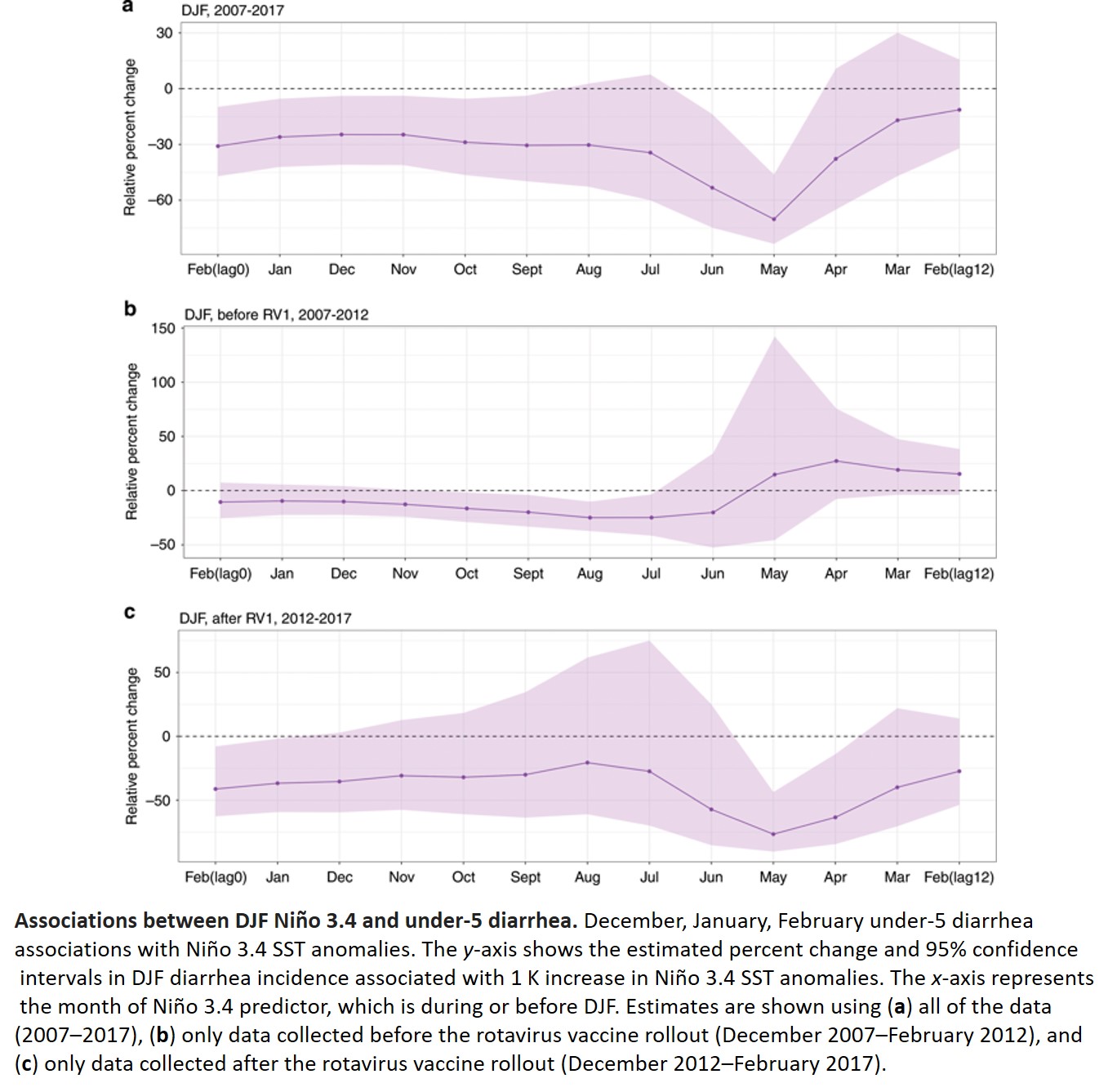 A study finds that spikes in cases of life-threatening diarrhea in young children are associated with La Niña climate conditions. The findings published in the journal Nature Communications could provide the basis for an early-warning system that would allow public health officials to prepare for periods of increased diarrhea cases as long as seven months ahead of time.

In low- and middle-income countries, diarrhea is the second leading cause of death in children younger than five years of age, with 72 percent of deaths occurring in the first two years of life. Rates of under-5 diarrhea in Africa are particularly high, with an estimated incidence of 3.3 episodes of diarrhea per child each year and one-quarter of all child deaths caused by diarrhea.

Researchers analyzed associations between ENSO and climate conditions and cases of under-5 diarrhea in the Chobe region in northeastern Botswana. They found that La Niña is associated with cooler temperatures, increased rainfall, and higher flooding during the rainy season. In turn, La Niña conditions lagged 0-7 months are associated with about a 30-percent increase in incidence of under-5 diarrhea in the early rainy season from December through February.

"These findings demonstrate the potential use of the El Niño-Southern Oscillation as a long-lead prediction tool for childhood diarrhea in southern Africa," says first author. "Advanced stockpiling of medical supplies, preparation of hospital beds, and organization of healthcare workers could dramatically improve the ability of health facilities to manage high diarrheal disease incidence."

Previously, El Niño events have been linked to diarrhea outbreaks in Peru, Bangladesh, China, and Japan, but until now studies of the effects of ENSO on diarrheal disease in Africa have been limited to cholera--a pathogen responsible for only a small fraction of diarrheal cases in Africa.

Infectious diarrhea is caused by many different pathogens (viruses, bacteria, and protozoa) and meteorological conditions can have a critical influence on pathogen exposures, in particular, those associated with waterborne transmission. For example, extreme rainfall events may contaminate drinking water by flushing diarrhea-causing pathogens from pastures and dwellings into drinking water supplies, and drought conditions can concentrate animal activity increasing the movement of diarrhea-causing pathogens into surface water resources.

The researchers speculate that centralized water disinfection processes currently used in the Chobe region may be insufficient to deal with changes in water quality brought on by extremes of wet and dry weather, although they caution that further confirmatory studies are needed.

Earlier research by Columbia Mailman researchers in the Chobe region found that cases of diarrhea in young children spiked during extreme climate conditions, in both the wet and dry seasons. A second study reported on a method to forecast childhood diarrheal disease there. Because climate conditions vary from region to region, forecasts for infectious diseases must be region-specific. In other studies, the scientists have created forecasts for influenza, Ebola, and West Nile Virus. During the influenza season in the United States, they publish weekly regional forecasts with predictions on whether cases are expected to rise or fall and by how much.

Research into links between climate systems and infectious disease in Botswana also provides insights into long-term changes in weather patterns coming as a result of climate change.

"In Southern Africa, precipitation is projected to decrease," says a co-author. "This change, in a hydrologically dynamic region where both wildlife and humans exploit the same surface water resources, may amplify the public health threat of waterborne illness. For this reason, there is an urgent need to develop the water sector in ways that can withstand the extremes of climate change."