The pheromone darcin drives a circuit for innate and reinforced behaviors 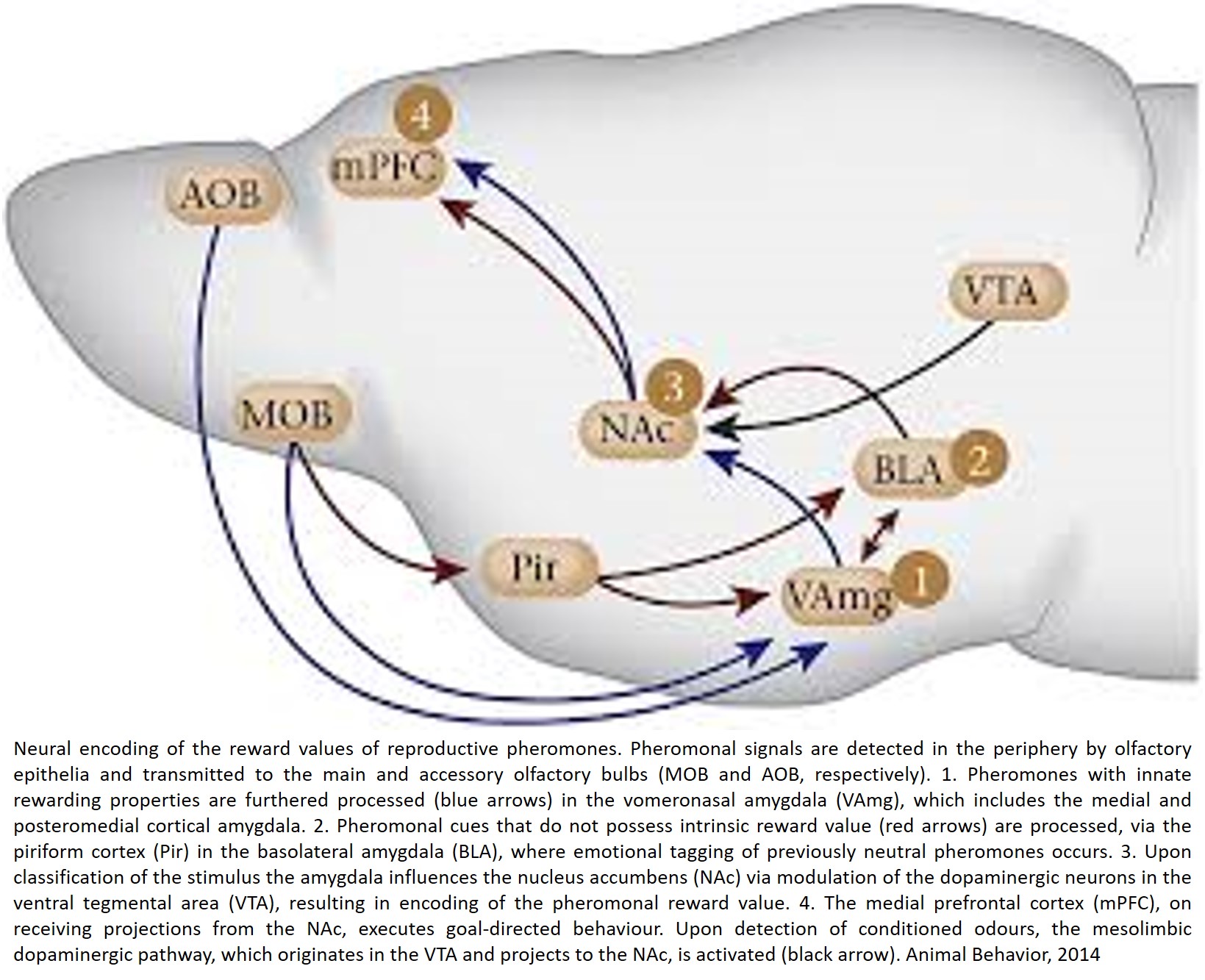 The infamously aloof Mr. Darcy had a hard time attracting members of the opposite sex in Jane Austen's Pride and Prejudice. But the same cannot be said for a sex pheromone named for him, called darcin. In a new study, researchers have now uncovered the process by which this protein takes hold in the brains of female mice, giving cells in the brain's emotion center the power to assess the mouse's sexual readiness and help her select a mate.

These findings, published in Nature, illustrate the power of a single protein to change the brain and drive behavior. They also demonstrate how a cluster of cells in one brain area integrates information from the outside world with the animal's own internal state.

"Pheromones act as powerful scent messages to signal the presence of danger, food or prospective mates," said the paper's first author. "With today's study, we've mapped the route that the pheromone darcin takes from the nose to the brain, bringing much-needed understanding to the mechanisms by which animals use scents to communicate," added the author.

While the existence of pheromones in humans is controversial, rodents and many other animals rely on pheromones as a way to signal everything from potential danger to a willingness to mate.

Darcin is one such pheromone, discovered in 2010. The team found that male mice release darcin in their urine to mark their territory and to initiate courtship displays. Sniffing a male's darcin helps a female to both identify him and decide whether to mate with him. This entire process is initiated in a biologically unusual way.

Normally, mice make sense of odors using olfactory receptors in the nose. These specialized proteins send information about a scent to a designated location in the brain for further processing..Pheromones, such as darcin, are processed somewhat differently. They interact with a second, parallel olfactory system, which exists in animals like mice but not in people.

"Unlike people, mice have essentially two functional noses," said the author. "The first nose works like ours: processing scents such as the stinky odor particles found in urine. But a second system, called the vomernasal nose, evolved specifically to perceive pheromones like darcin."

For the study, the research team first exposed female mice to darcin-scented urine and monitored their behavior. Nearly all of the female mice showed an immediate attraction to darcin. Then, after about 50 minutes, some females began leaving their own urinary scent markings. They also started to sing, at ultrasonic frequencies too high for the human ear to hear. Both of these behaviors are an indicator of increased sexual drive.

Not all females performed these displays. Lactating mothers, for example, appeared to largely ignore the darcin-scented areas after an initial sniff of interest.

The reason for this difference, the scientists proposed, may lie in a brain region called the medial amygdala. The research team identified a subset of brain cells, or neurons, in this brain area, called nNOS neurons, that switched on in the presence of darcin.

"By artificially activating those neurons, we could simulate the animals' response to darcin and elicit the same behaviors," said the author. "When we silenced these neurons, the animal lost interest in darcin entirely."

The neurons' location in the medial amygdala was particularly intriguing. This brain area is generally associated with hardwired emotional responses, such as fear or anger. In the case of the darcin pheromone, though, the medial amygdala may serve another role.

"Our results suggest that nNOS neurons in the medial amygdala do not simply pass along information about darcin," said the author. "These neurons seem to be integrating sensory information about the pheromone with the internal state of the animal, such as whether she is a lactating mother and therefore not interested in mating."

Going forward, the research team plans to delve deeper into the neural circuitry that responds to pheromones and how changes to that circuitry drive behavior. They also hope their findings will serve to update how pheromones are defined.

"Pheromones have long been associated with an innate, immediate behavioral response, but here we have shown that darcin can elicit complex behaviors that are dependent on the internal state of the animal," said the author. "As we continue our investigations, it's possible that other pheromones may also act on the brain in similarly unexpected and complex ways."