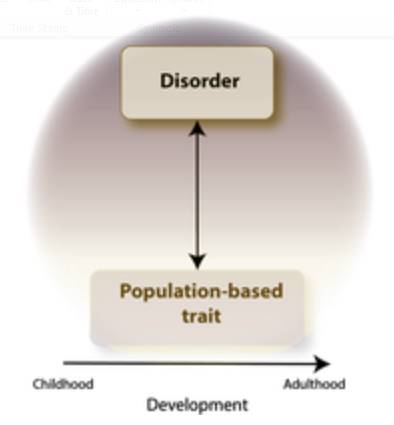 The researchers studied the genetic overlap between the risk of having these psychiatric disorders and measures of social communicative competence - the ability to socially engage with other people successfully - during middle childhood to adolescence.

Overlap in genetic influences between ASD (autism spectrum disorder) and social communication difficulties during development decreased with age.  Genetic overlap between schizophrenia and social communication difficulties, by contrast, persisted across age, and showed an increase in magnitude for traits assessed during later adolescence. The findings were published in Molecular Psychiatry.

ASD- and schizophrenia-related polygenic effects were unrelated to each other and changes in trait-disorder links reflect the heterogeneity of genetic factors influencing social communication difficulties during childhood versus later adolescence. Thus, both clinical ASD and schizophrenia share some genetic influences with impairments in social communication, but reveal distinct developmental profiles in their genetic links, consistent with the onset of clinical symptoms.

"The findings suggest that the risk of developing these contrasting psychiatric conditions is strongly related to distinct sets of genes, both of which influence social communication skills, but which exert their maximum influence during different periods of development", explained senior investigator and lead author of the study.

People with autism and with schizophrenia both have problems interacting and communicating with other people, because they cannot easily initiate social interactions or give appropriate responses in return. On the other hand, the disorders of autism and schizophrenia develop in very different ways. The first signs of ASD typically occur during infancy or early childhood, whereas the symptoms of schizophrenia usually do not appear until early adulthood.

People with autism have serious difficulties in engaging socially with others and understanding social cues, as well as being rigid, concrete thinkers with obsessive interests. In contrast, schizophrenia is characterised by hallucinations, delusions, and seriously disturbed thought processes. Yet recent research has shown that many of these characteristics and experiences can be found, to a mild degree, in typically developing children and adults. In other words, there is an underlying continuum between normal and abnormal behavior.

Recent advances in genome-wide analyses have helped drawing a more precise picture of the genetic architecture underlying psychiatric disorders and their related symptoms in unaffected people. A large proportion of risk to disorder, but also variation in milder symptoms, stems from combined small effects of many thousands of genetic differences across the genome, known as polygenic effects. For social communication behavior, these genetic factors are not constant, but change during childhood and adolescence. This is because genes exert their effects consistent with their biological programming.