A protein in maintaining liver size and function revealed 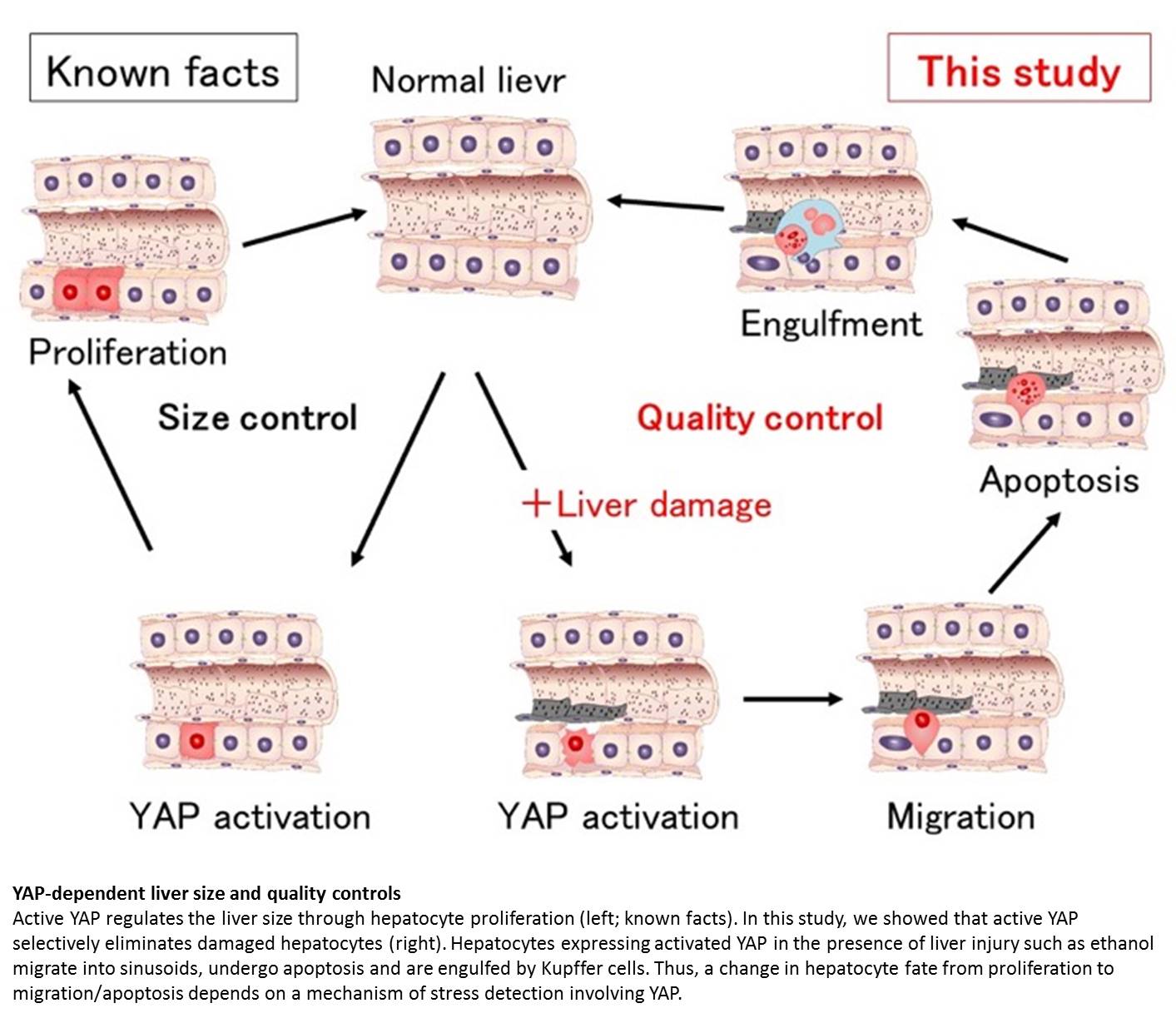 A team of researchers identified a molecule called YAP that determines whether liver cells proliferate or are eliminated, depending on the presence or absence of injury, thus shedding light on how this organ maintains its structure and function.

For organs to maintain a steady state and fulfill their intended functions, the rates at which the cells within them multiply or die off need to be equal. This balance must also be adjusted when events such as an injury or infection occur. However, the mechanisms by which such balance is achieved have remained obscure, including for the liver, which is particularly vulnerable to destabilization owing to its function in detoxifying the body.

In a major advance on this issue, the team has shown that a molecule called YAP regulates the fate of liver cells called hepatocytes, determining whether they proliferate to boost the organ's bulk or are degraded and removed. This choice was shown to be dependent on whether the liver cells had been damaged, which deepens our understanding of how this organ maintains itself.

In their work, reported recently in the journal Nature Communications, the team used a range of different techniques to introduce different variants of the YAP gene into mouse liver. Earlier findings had shown that an activated form of YAP normally enters the nucleus of liver cells where it promotes the expression of genes that cause these cells to proliferate. However, here the team found that the effects on cell fate of introducing YAP into cells differed depending on whether a hydraulic pressure or a virus carrier was used, realizing that it was actually the injury caused by the hydraulic pressure itself that had spurred this difference.

"Once we suspected that cell injury was a key factor determining which effect YAP had on the liver cell population, we analyzed which type of liver injury caused YAP to induce cells to be eliminated rather than multiply using toxic chemicals that damage only specific liver cell types," says the senior author. "We found that damage to both hepatocytes and cells called liver sinusoidal endothelial cells led to the induction of hepatocyte elimination by YAP, which provided a strong hint about the process behind this elimination."

Specifically, the team showed that YAP is activated upon damage to cells in the liver, leading to the migration of these cells to special blood vessels in the liver. There, they undergo apoptotic cell death and are engulfed and degraded by Kupffer cells, which are liver-specific immune cells.

"This shows how effectively the liver can regulate its own size and function," co-author says. "Without regulatory mechanisms like this, the liver would be much more susceptible to becoming enlarged or developing cancerous growths."

The obtained findings could also help explain the causes of liver diseases associated with dysregulation of some of the key processes that enable this organ to function.

Using E. coli to detect hormone disruptors in the environment Remote-controlled bacteria made to swim

Microscopic submarines for your stomach