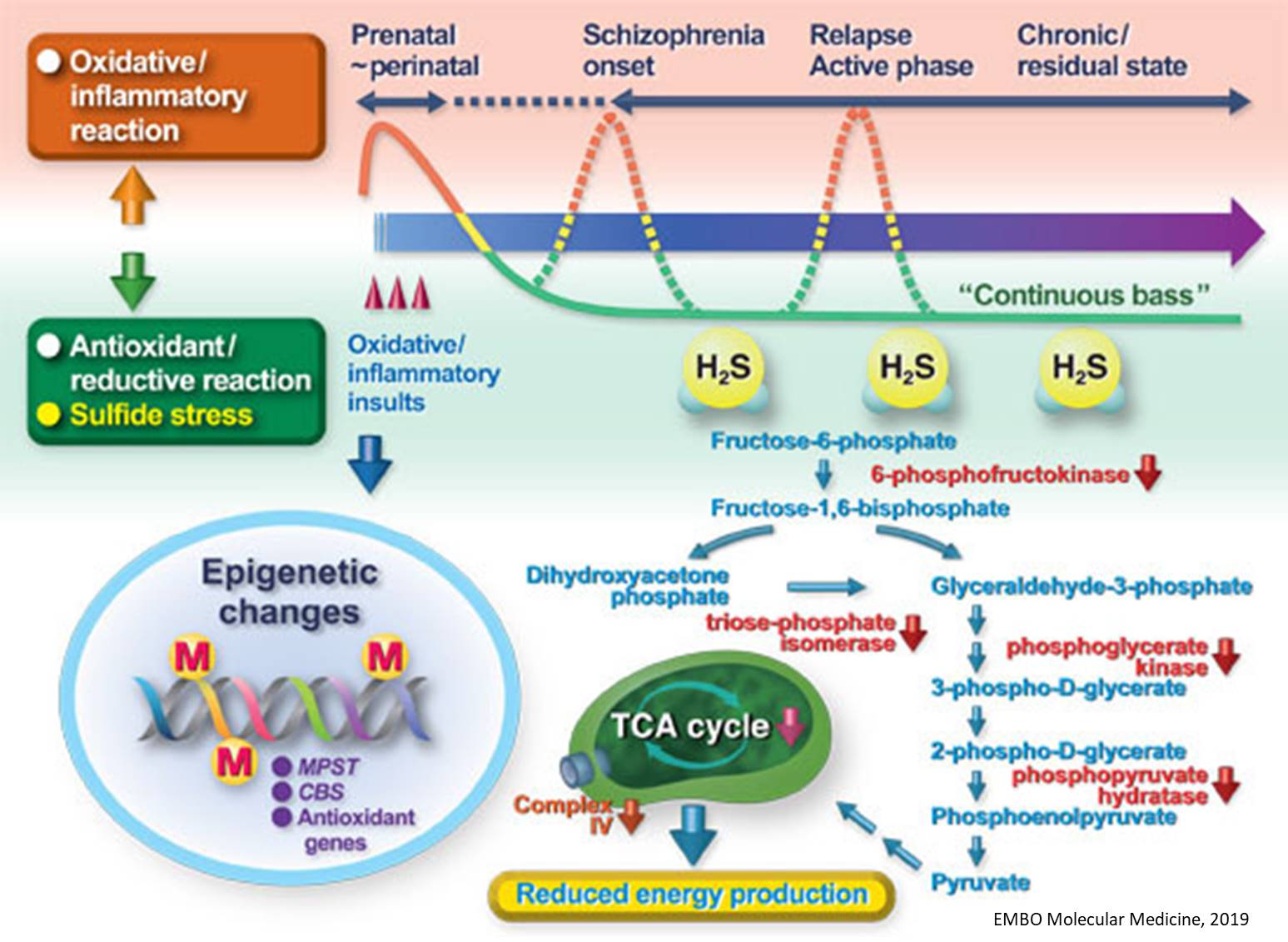 Working with model mice, post-mortem human brains, and people with schizophrenia, researchers at the have discovered that a subtype of schizophrenia is related to abnormally high levels hydrogen sulfide in the brain. Experiments showed that this abnormality likely results from a DNA-modifying reaction during development that lasts throughout life. In addition to providing a new direction for research into drug therapies, higher than normal levels of the hydrogen sulfide-producing enzyme can act as biomarker for this type of schizophrenia.

Diagnosing disorders of thought is easier when a reliable and objective marker can be found. In the case of schizophrenia, we have known for more than 30 years that it is associated with an abnormal startle response. Normally, we are not startled as much by a burst of noise if a smaller burst--called a prepulse--comes a little bit earlier. This phenomenon is called prepulse inhibition (PPI) because the early pulse inhibits the startle response. In people with schizophrenia, PPI is lowed, meaning that their startle response is not dampened as much as it should be after the prepulse.

The PPI test is a good behavioral marker, and although it cannot directly help us understand the biology behind schizophrenia, it was the starting point that led to current discoveries.

The researchers began first looked for differences in protein expression between strains of mice that exhibit extremely low or extremely high PPI. Ultimately, they found that the enzyme Mpst was expressed much more in the brains of the mouse strain with low PPI than in the strain with high PPI. Knowing that this enzyme helps produce hydrogen sulfide, the team then measured hydrogen sulfide levels and found that they were higher in the low-PPI mice.

"Nobody has ever thought about a causal link between hydrogen sulfide and schizophrenia," says team leader. "Once we discovered this, we had to figure out how it happens and if these findings in mice would hold true for people with schizophrenia."

First, to be sure that Mpst was the culprit, the researchers created an Mpst knockout version of the low-PPI mice and showed that their PPI was higher than that in regular low-PPI mice. Thus, reducing the amount of Mpst helped the mice become more normal. Next, they found that MPST gene expression was indeed higher in postmortem brains from people with schizophrenia than in those from unaffected people. MPST protein levels in these brains also correlated well with the severity of premortem symptoms.

Whether a person develops schizophrenia is related to both their genetics and the environment. Testing in mice and postmortem brains indicated that high MPST levels were associated with changes in DNA that lead to permanently altered gene expression. So, the next step was for the team to search for environmental factors that could result in permanently increased MPST production.

Because hydrogen sulfide can actually protect against inflammatory stress, the group hypothesized that inflammatory stress during early development might be the root cause. "We found that anti-oxidative markers--including the production of hydrogen sulfide--that compensate against oxidative stress and neuroinflammation during brain development were correlated with MPST levels in the brains of people with schizophrenia," says the author and proposes that once excess hydrogen sulfide production is primed, it persists throughout life due to permanent epigenetic changes to DNA, leading to "sulfide stress" induced schizophrenia.

Current treatments for schizophrenia focus on the dopamine and serotonin system in the brain. Because these drugs are not very effective and have side effects, the author says that pharmaceutical companies have abandoned the development of new drugs. "A new paradigm is needed for the development of novel drugs," the author explains. "Currently, about 30% of patients with schizophrenia are resistant to dopamine D2-receptor antagonist therapy. Our results provide a new principle or paradigm for designing drugs, and we are currently testing whether inhibiting the synthesis of hydrogen sulfide can alleviate symptoms in mouse models of schizophrenia."