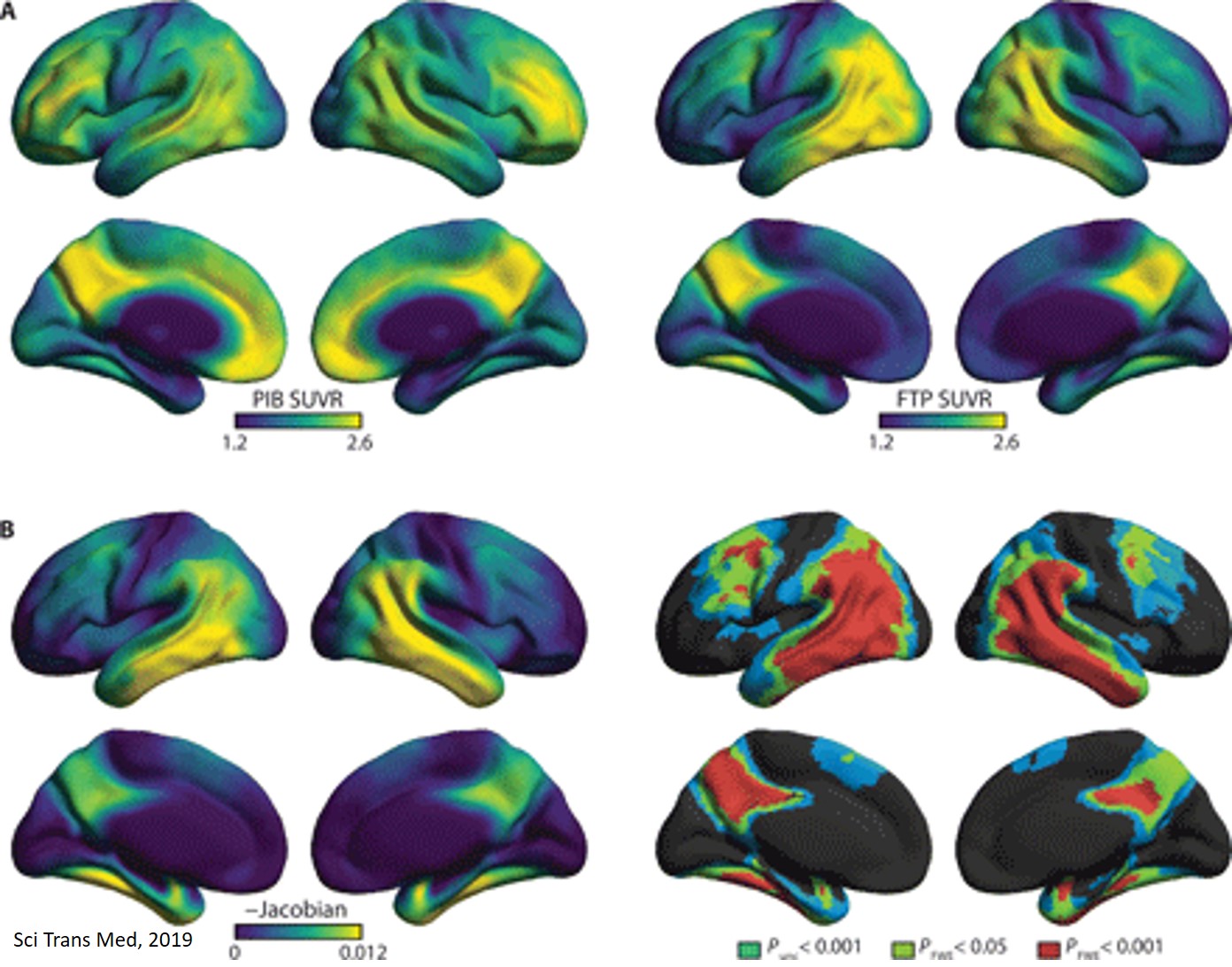 Brain imaging of pathological tau-protein "tangles" reliably predicts the location of future brain atrophy in Alzheimer's patients a year or more in advance, according to a new study by scientists. In contrast, the location of amyloid "plaques," which have been the focus of Alzheimer's research and drug development for decades, was found to be of little utility in predicting how damage would unfold as the disease progressed.

"The match between the spread of tau and what happened to the brain in the following year was really striking," said the senior author. "Tau PET imaging predicted not only how much atrophy we would see, but also where it would happen. These predictions were much more powerful than anything we've been able to do with other imaging tools, and add to evidence that tau is a major driver of the disease."

Alzheimer's researchers have long debated the relative importance of amyloid plaques and tau tangles -- two kinds of misfolded protein clusters seen in postmortem studies of patients' brains, both first identified by Alois Alzheimer in the early 20th century. For decades, the "amyloid camp" has dominated, leading to multiple high-profile efforts to slow Alzheimer's with amyloid-targeting drugs, all with disappointing or mixed results.

Many researchers are now taking a second look at tau protein, once dismissed as simply a "tombstone" marking dying cells, and investigating whether tau may in fact be an important biological driver of the disease. In contrast to amyloid, which accumulates widely across the brain, sometimes even in people with no symptoms, autopsies of Alzheimer's patients have revealed that tau is concentrated precisely where brain atrophy is most severe, and in locations that help explain differences in patients' symptoms (in language-related areas vs. memory-related regions, for example).

"No one doubts that amyloid plays a role in Alzheimer's disease, but more and more tau findings are beginning to shift how people think about what is actually driving the disease," explained the lead author of the new study. "Still, just looking at postmortem brain tissue, it has been hard to prove that tau tangles cause brain degeneration and not the other way around. One of our group's key goals has been to develop non-invasive brain imaging tools that would let us see whether the location of tau buildup early in the disease predicts later brain degeneration."

Despite early misgivings that tau might be impossible to measure in the living brain, scientists recently developed an injectable molecule called flortaucipir -- currently under review by the FDA -- which binds to misfolded tau in the brain and emits a mild radioactive signal that can be picked up by PET scans.

The authors have been among the first to adopt tau PET imaging to study the distribution of tau tangles in the normally aging brain and in a smaller cross-sectional study of Alzheimer's patients. Their new study represents the first attempt to test whether tau levels in Alzheimer's patients can predict future brain degeneration.

The authors recruited 32 participants with early clinical stage Alzheimer's disease through the UCSF Memory and Aging Center, all of whom received PET scans using two different tracers to measure levels of amyloid protein and tau protein in their brains. The participants also received MRI scans to measure their brain's structural integrity, both at the start of the study, and again in follow-up visits one to two years later.

The researchers found that overall tau levels in participants' brains at the start of the study predicted how much degeneration would occur by the time of their follow up visit (on average 15 months later). Moreover, local patterns of tau buildup predicted subsequent atrophy in the same locations with more than 40 percent accuracy. In contrast, baseline amyloid-PET scans correctly predicted only 3 percent of future brain degeneration.

"Seeing that tau buildup predicts where degeneration will occur supports our hypothesis that tau is a key driver of neurodegeneration in Alzheimer's disease," the lead said.

Notably, PET scans revealed that younger study participants had higher overall levels of tau in their brains, as well as a stronger link between baseline tau and subsequent brain atrophy, compared to older participants. This suggests that other factors -- likely other abnormal proteins or vascular injuries -- may play a larger role in late-onset Alzheimer's, the researchers say.

The results add to hopes that tau-targeting drugs currently under study at the UCSF Memory and Aging Center and elsewhere may provide clinical benefits to patients by blocking this key driver of neurodegeneration in the disease. At the same time, the ability to use tau PET to predict later brain degeneration could enable more personalized dementia care and speed ongoing clinical trials, the authors say.

"One of the first things people want to know when they hear a diagnosis of Alzheimer's disease is simply what the future holds for themselves or their loved ones. Will it be a long fading of memory, or a quick decline into dementia? How long will the patient be able to live independently? Will they lose the ability to speak or get around on their own? These are questions we can't currently answer, except in the most general terms," the senior author said. "Now, for the first time, this tool could let us give patients a sense of what to expect by revealing the biological process underlying their disease."

The team also anticipate that the ability to predict future brain atrophy based on tau PET imaging will allow Alzheimer's clinical trials to quickly assess whether an experimental treatment can alter the specific trajectory predicted for an individual patient, which is currently impossible due to the wide variability in how the disease progresses from individual to individual. Such insights could make it possible to adjust dosage or switch to a different experimental compound if the first treatment is not affecting tau levels or altering a patient's predicted trajectory of brain atrophy.

"Tau PET could be an extremely valuable precision medicine tool for future clinical trials," the senior author said. "The ability to sensitively track tau accumulation in living patients would for the first time let clinical researchers seek out treatments that can slow down or even prevent the specific pattern of brain atrophy predicted for each patient."