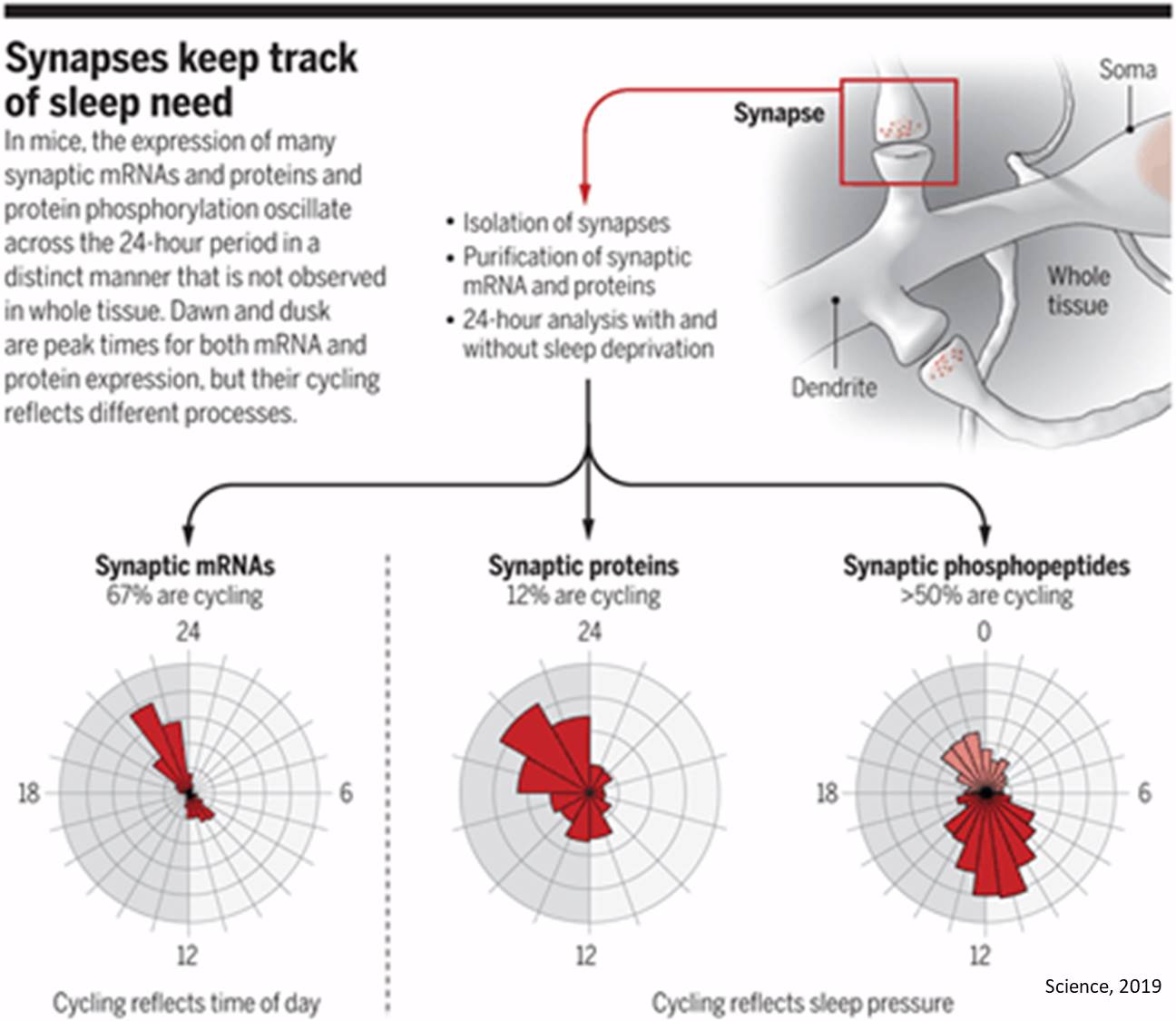 The natural need for sleep and the brain's synaptic function are closely linked, according to a pair of studies in mice, which suggest that sleep deprivation may also deprive the brain of key proteins required for synaptic activities including plasticity.

Sleep is essential for our brains and deprivation of this vital process can result in significant cognitive impairment - remedied only by restful slumber. Our ability to sleep is governed by daily rhythm and by the brain's need for sleep, or sleep pressure, which gradually increases the longer we stay awake. However, little is known about how sleep restores brain function or how the need for sleep is tallied.

In two studies, researchers, respectively, report comprehensive overviews of the daily changes in synaptic transcriptome and proteome phosphorylation in the mouse forebrain, the largest division of the brain that includes the cerebral cortex.

"The new findings together with previous evidence leave little doubt that synaptic function reflects time spent awake and asleep," write the authors. They evaluated the circadian rhythm of synaptic messenger RNA (mRNA) and protein abundance over 24 hours in both normal and sleep-deprived mice. The results show that nearly 70% of synaptic mRNAs, as well as many proteins and phosphoproteins, demonstrated circadian oscillations; those related to metabolism and translation peaked near dawn (bedtime for nocturnal mice) and those associated with synaptic signaling peaked before they awoke at dusk.

In sleep-deprived mice, however, this pattern was found to be surprisingly different. While the cycling of mRNA remained largely unaffected, the daily rhythm of nearly all proteins - critical for most synaptic function - was lost, suggesting a driver outside of the circadian clock.

Building upon this work, the authors more closely examined the relations between sleep-wake cycles, sleep pressure and the synaptic phosphoteomics in mice. The authors discovered that sleep deprivation resulted in the abrupt termination of daily cycling in nearly 1,000 phosphoproteins, including many kinases central to synaptic functions like plasticity and cellular health.

Together, the results of the studies demonstrate a central role of sleep and wake pressure - independent of circadian mechanisms - on the phosphorylation of synaptic proteins central to maintaining synaptic function. The results also inform how mental dysfunction may be related to sleep deprivation. Is malnutrition an immune disorder? How genes are selected to create diverse immune cell receptors Autoimmunity prevention by digestion of DNA in apoptotic cells