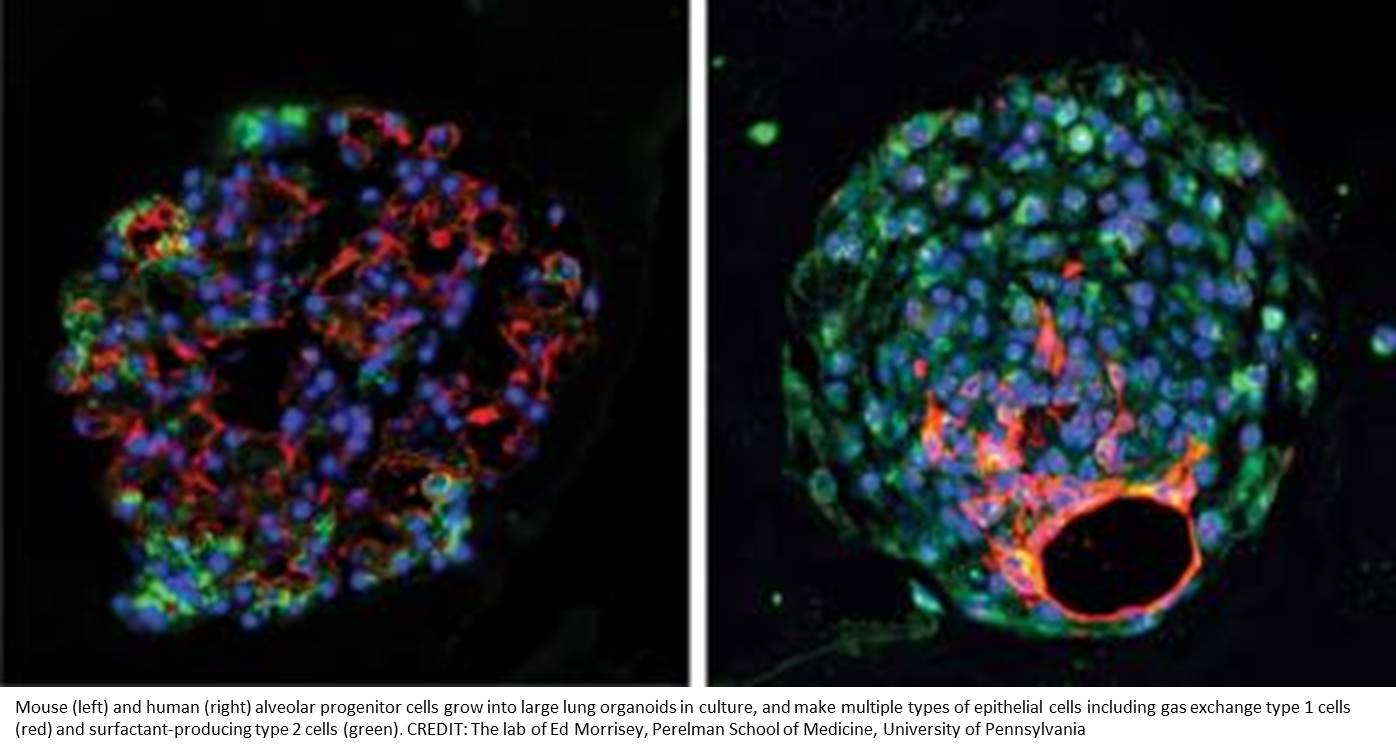 Researchers have identified a lung stem cell that repairs the organ's gas exchange compartment, according to a new study published in Nature.. They isolated and characterized these progenitor cells from mouse and human lungs and demonstrated they are essential to repairing lung tissue damaged by severe influenza and other respiratory ailments.

The development of the lung, or pulmonary system, is an evolutionary adaption to life on land. Lungs are essential in most large animals for a terrestrial existence. Their complex structure, which is dictated in part by their integration with the cardiovascular system, makes them an interesting yet difficult organ to study from a regeneration medicine perspective. In addition, lung disease is one of the leading causes of death in the world, surpassed only by cardiovascular disease and cancer.

The Nature study examined the epithelial cells that line the surfaces of lung gas-exchange alveoli for stem cell behavior that could restore normal respiratory function after severe injury caused by an influenza infection or in such diseases as chronic obstructive pulmonary disease (COPD). While some organs, such as the intestine, turn over the entire epithelial lining every five days through the activity of a resident stem-cell lineage, organs such as the lung exhibit very slow turnover and contain stem cells that are activated only upon injury to regenerate the damaged tissue.

The team identified an alveolar epithelial progenitor (AEP) lineage which is embedded in a larger population of cells called alveolar type 2 cells, or AT2s. These cells generate pulmonary surfactant (a wetting agent), which keeps the lungs from collapsing upon every breath taken. "AEPs are a stable lineage in the lung and turn over very slowly, but expand rapidly after injury to regenerate the lining of the alveoli and restore gas exchange," said co-first author.

AEPs exhibit their own distinct suite of genes and contain a unique epigenetic signature. AEPs exhibit a distinct transcriptome, epigenome and functional phenotype and respond specifically to Wnt and Fgf signalling. The lab used the genomic information gained from mouse AEPs to identify a conserved cell surface protein called TM4SF1 that can be used to isolated AEPs from the human lung. Using this ability to isolate mouse and human AEPs, the team then generated three-dimensional lung organoids. "From our organoid culture system, we were able to show that AEPs are an evolutionarily conserved alveolar progenitor that represents a new target for human lung regeneration strategies," senior author said.