Manipulating brain waves in sleeping to enhance forgetting or learning 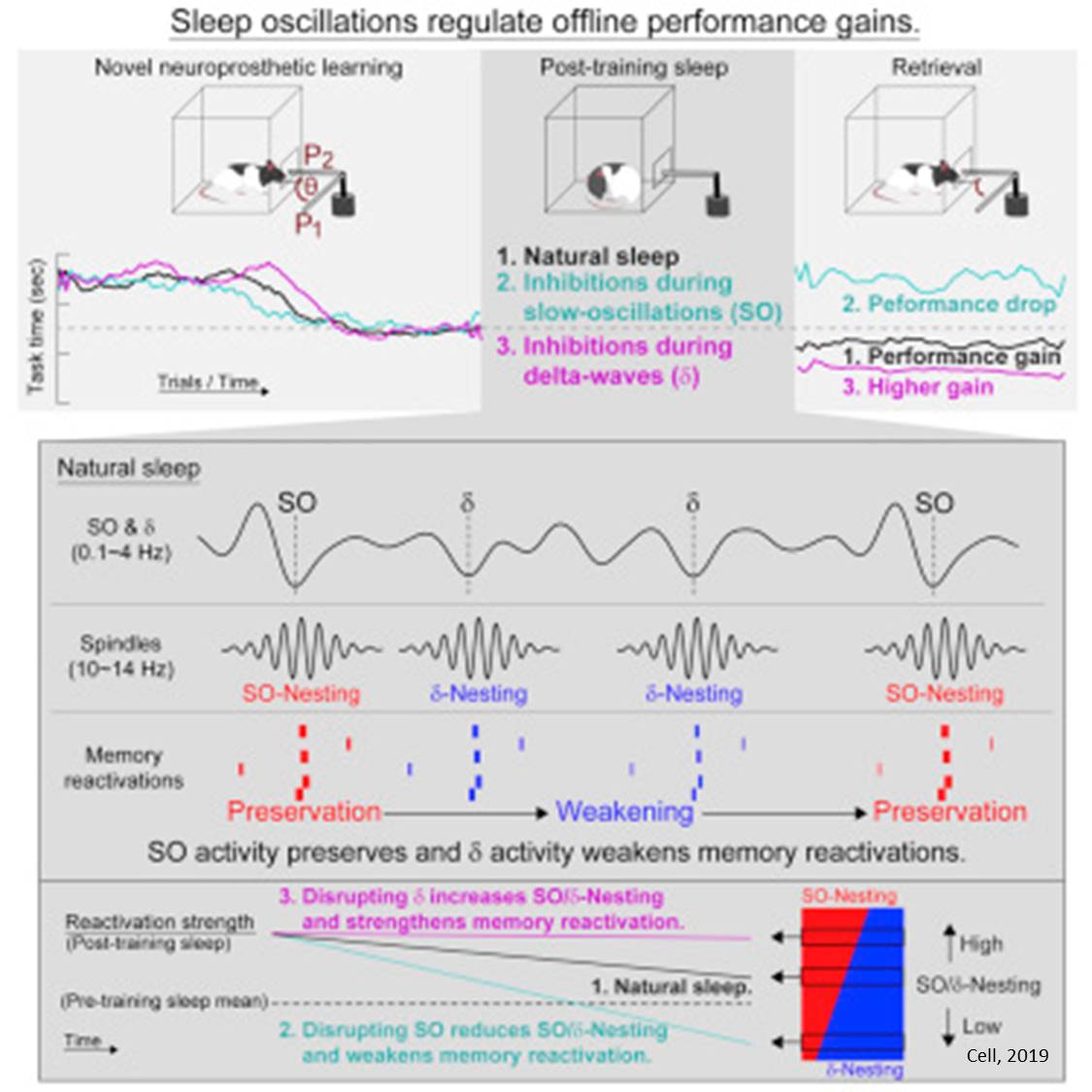 Distinct patterns of electrical activity in the sleeping brain may influence whether we remember or forget what we learned the previous day, according to a new study. The scientists were able to influence how well rats learned a new skill by tweaking these brainwaves while animals slept, suggesting potential future applications in boosting human memory or forgetting traumatic experiences, the researchers say.

In the new study, published in the journal Cell, a research team used a technique called optogenetics to dampen specific types of brain activity in sleeping rats at will.

This allowed the researchers to determine that two distinct types of slow brain waves seen during sleep, called slow oscillations and delta waves, respectively strengthened or weakened the firing of specific brain cells involved in a newly learned skill -- in this case how to operate a water spout that the rats could control with their brains via a neural implant.

"We were astonished to find that we could make learning better or worse by dampening these distinct types of brain waves during sleep," the senior author said. "In particular, delta waves are a big part of sleep, but they have been less studied, and nobody had ascribed a role to them. We believe these two types of slow waves compete during sleep to determine whether new information is consolidated and stored, or else forgotten."

"Linking a specific type of brain wave to forgetting is a new concept," the senior author added. "More studies have been done on strengthening of memories, fewer on forgetting, and they tend to be studied in isolation from one another. What our data indicate is that there is a constant competition between the two -- it's the balance between them that determines what we remember."

Over the past two decades the centuries-old human hunch that sleep plays a role in the formation of memories has been increasingly supported by scientific studies. Animal studies show that the same neurons involved in forming the initial memory of a new task or experience are reactivated during sleep to consolidate these memory traces in the brain. Many scientists believe that forgetting is also an important function of sleep -- perhaps as a way of uncluttering the mind by eliminating unimportant information.

Slow oscillations and delta waves are hallmarks of so-called non-REM sleep, which -- in humans, at least -- makes up half or more of a night's sleep. There is evidence that these non-REM sleep stages play a role in consolidating various kinds of memory, including the learning of motor skills. In humans, researchers have found that time spent in the early stages of non-REM sleep is associated with better learning of a simple piano riff, for instance.

The team began studying the role of sleep in learning as part of their ongoing efforts to develop neural implants that would allow people with paralysis to more reliably control robotic limbs with their brain. In early experiments in laboratory animals, they had noted that the biggest improvements in the animals' ability to operate these brain-computer interfaces occurred when they slept between training sessions.

In the new study, a dozen rats were implanted with electrodes that monitor firing among a small group of selected neurons in their brains' motor cortex, which is involved in conceiving and executing voluntary movements. Producing a particular pattern of neural firing allowed the rats to control a water-dispensing tube in their cages. In essence, the rats were performing a kind of biofeedback -- each rat learned how to fire a small ensemble of neurons together in a unique new pattern in order to move the spigot and get the water.

The team observed the same unique new firing pattern replaying in animals' brains as they slept. The strength of this reactivation during sleep determined how well rats were able to control the water spout the next day. But the researchers wanted to go further -- to understand how the brain controls whether rats learn or forget while they slumber.

To manipulate the effect of brain waves during non-REM sleep, the researchers genetically modified rat neurons to express a light-sensitive optogenetic control switch, allowing the team to use lasers and fiber optics to instantaneously dampen brain activity associated with the transmission of specific brain waves. With precise, millisecond timing of the laser, the scientists in separate experiments specifically dampened either slow oscillating waves or delta waves in a tiny patch of the brain around the new memory circuit.

Disruption of delta waves strengthened reactivation of the task-associated neural activity during sleep and was associated with better performance upon waking. Conversely, disruption of slow oscillations resulted in poor performance upon waking. "Slow oscillations seem to be protecting new patterns of neural firing after learning, while delta waves tend to erase them and promote forgetting," the senior author said.

Further analysis showed that in order to protect learning, slow oscillations had to occur at the same time as a third, well-studied brain wave phenomenon, called sleep spindles. A sleep spindle is a high-frequency, short-duration burst of activity that originates in a region called the thalamus and then propagates to other parts of the brain. They have been linked to memory consolidation, and a lack of normal sleep spindles is associated with brain maladies including schizophrenia and developmental delay, and also with aging.

"Our work shows that there is a strong drive to forget during sleep," the senior author said. "Very brief pairings of sleep spindles and slow oscillations can overcome delta wave-driven forgetting and preserve learning, but the balance is very delicate. Even small disturbances in these events lead to forgetting."

It's not yet known what tips the scales between delta wave-driven forgetting and slow oscillation-driven learning, but it's clear that better understanding the process could have profound impacts on the study of human learning and memory, the senior author said. "Sleep is truly driving profound changes in the brain. Understanding these changes will be critical for brain integration of artificial interfaces and may one day allow us to modify neural circuits to aid in movement rehabilitation, such as after stroke, where previous studies have shown that sleep plays an important role in successful recovery." Novel signature in the brains of children with cerebral malaria Melatonin contributes to the seasonality of multiple sclerosis relapses