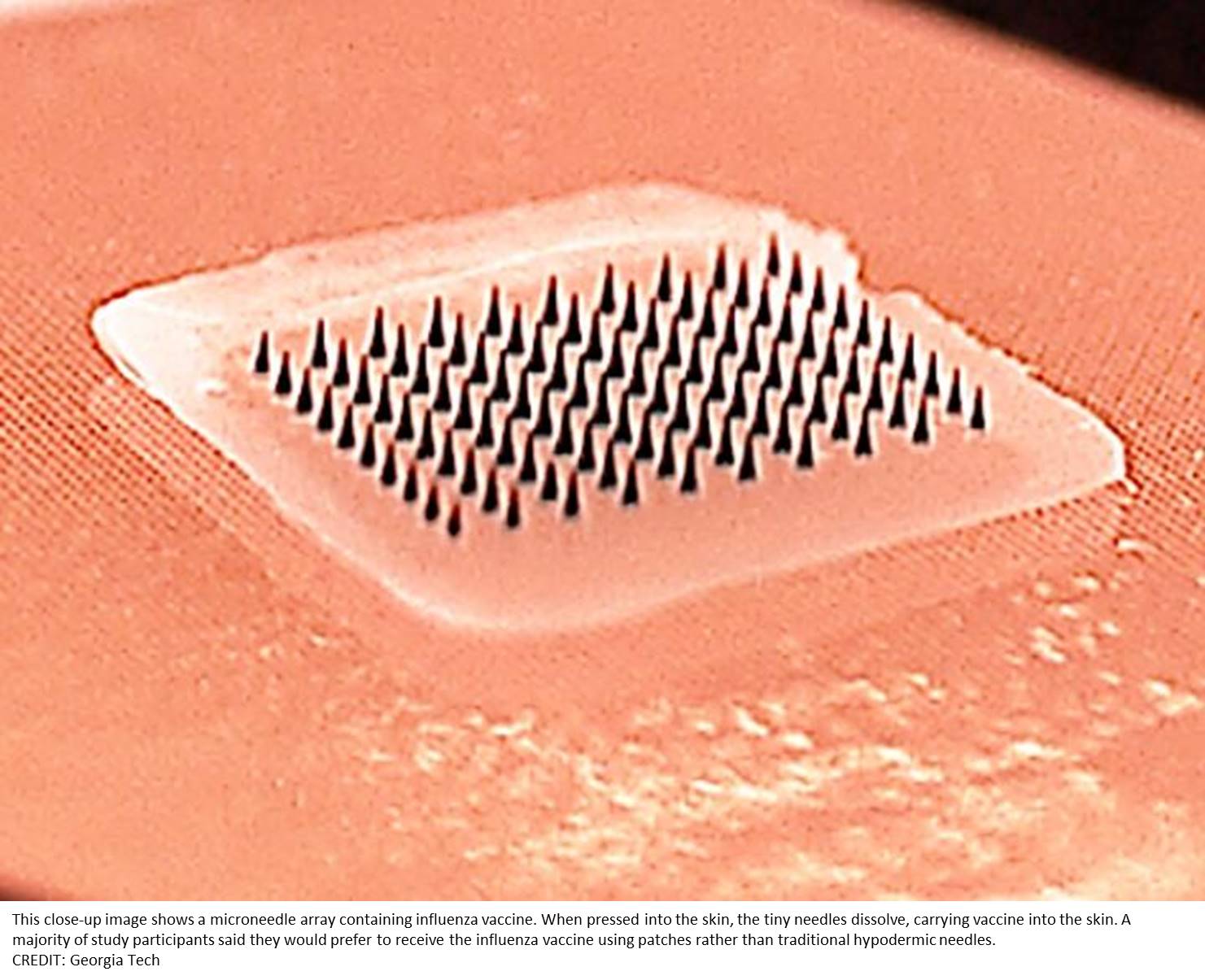 The microneedle patch vaccine could also save money because it is easily self-administered, could be transported and stored without refrigeration, and is easily disposed of after use without sharps waste. Results of the study are published journal The Lancet.

"Despite the recommendation of universal flu vaccination, influenza continues to be a major cause of illness leading to significant morbidity and mortality," says first author and principal investigator of the clinical trial. "Having the option of a flu vaccine that can be easily and painlessly self-administered could increase coverage and protection by this important vaccine."

The first-in-human clinical trial of the flu vaccine patches began in June 2015 with 100 participants aged 18-49 who were healthy and who had not received the influenza vaccine during the 2014-15 flu season. The study was conducted at the Hope Clinic of the Emory Vaccine Center in Atlanta. The study was carried out under an Investigational New Drug Application authorized by the FDA.

Study results showed that vaccination with the microneedle patches was safe, with no adverse events reported. Local skin reactions to the patches were mostly faint redness and mild itching that lasted two to three days. No new chronic medical illnesses or influenza-like illnesses were reported with either the patch or the injection groups. Antibody responses generated by the vaccine, as measured through analysis of blood samples, were similar in the groups vaccinated using patches and those receiving intramuscular injection, and these immune responses were still present after six months. More than 70 percent of patch recipients reported they would prefer patch vaccination over injection or intranasal vaccination for future vaccinations.

No significant difference was seen between the doses of vaccine delivered by the health care workers and the volunteers who self-administered the patches, showing that participants were able to correctly self-administer the patch. After vaccination, imaging of the used patches found that the microneedles had dissolved in the skin, suggesting that the used patches could be safely discarded as non-sharps waste. The vaccines remained potent in the patches without refrigeration for at least one year.

The microneedle patches used in the study were designed at Georgia Tech and manufactured by the Global Center for Medical Innovation in Atlanta.

The researchers also are working to develop microneedle patches for use with other vaccines, including measles, rubella and polio.

The authors summarize: "Influenza vaccination using microneedle patches is well-tolerated, well-accepted, and results in robust immunologic responses, whether administered by health care workers or by the participants themselves. These results provide evidence that microneedle patch vaccination is an innovative new approach with the potential to improve current vaccination coverage and reduce immunization costs." How fingers interact with surfaces