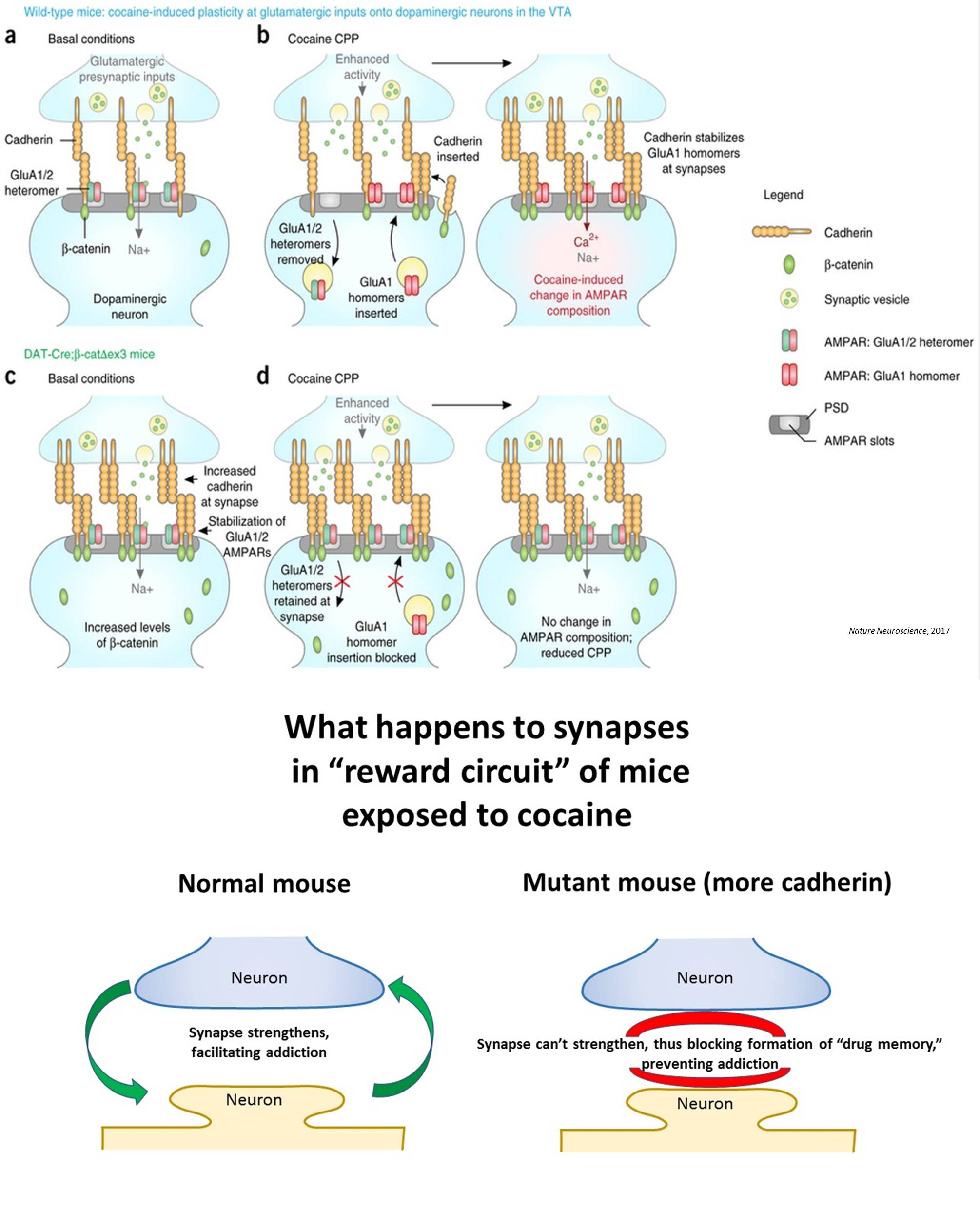 Scientists have genetically engineered a mouse that does not become addicted to cocaine, adding to the evidence that habitual drug use is more a matter of genetics and biochemistry than just poor judgment.

The mice they created had higher levels of a protein called cadherin, which helps bind cells together. In the brain, cadherin helps strengthen synapses between neurons - the gaps that electrical impulses must traverse to bring about any action or function controlled by the brain, whether it's breathing, walking, learning a new task or recalling a memory.

Learning - including learning about the pleasure induced by a stimulant drug - requires a strengthening of certain synapses. So researchers thought that extra cadherin in the reward circuit would make their mice more prone to cocaine addiction.

But they found the opposite to be true, as they explain in an article published in Nature Neuroscience.

Researchers injected cocaine into mice over a number of days and immediately placed in a distinctly decorated compartment in a three-room cage, so that they would associate the drug with that compartment. After several days of receiving cocaine this way, the mice were put into the cage and allowed to spend time in any compartments they preferred. The normal mice almost always gravitated to the cocaine-associated compartment, while the mice with extra cadherin spent half as much time there - indicating that these mice hadn't formed strong memories of the drug.

To understand that unexpected result, researchers analyzed the brain tissue of the genetically engineered mice.

They found that extra cadherin prevents a type of neurochemical receptor from migrating from the cell's interior to the synaptic membrane. Without that receptor in place, it's difficult for a neuron to receive a signal from adjoining neurons. So the synapses don't strengthen and the pleasurable memory does not "stick."

"Through genetic engineering, we hard-wired in place the synapses in the reward circuits of these mice," says graduate. "By preventing the synapses from strengthening, we prevented the mutant mice from 'learning' the memory of cocaine, and thus prevented them from becoming addicted."

Their finding provides an explanation for previous studies showing that people with substance use problems tend to have more genetic mutations associated with cadherin and cell adhesion. As studies such as this one illuminate the biochemical underpinnings of addiction, it could lead to greater confidence in predicting who is more vulnerable to drug abuse - and enable people to act on that knowledge.

Unfortunately, finding a way of augmenting cadherin as a way of resisting addiction in humans is fraught with pitfalls. In many cases, it's important to strengthen synapses - even in the reward circuit of the brain.

"For normal learning, we need to be able to both weaken and strengthen synapses," the senior author says. "That plasticity allows for the pruning of some neural pathways and the formation of others, enabling the brain to adapt and to learn. Ideally, we would need to find a molecule that blocks formation of a memory of a drug-induced high, while not interfering with the ability to remember important things."