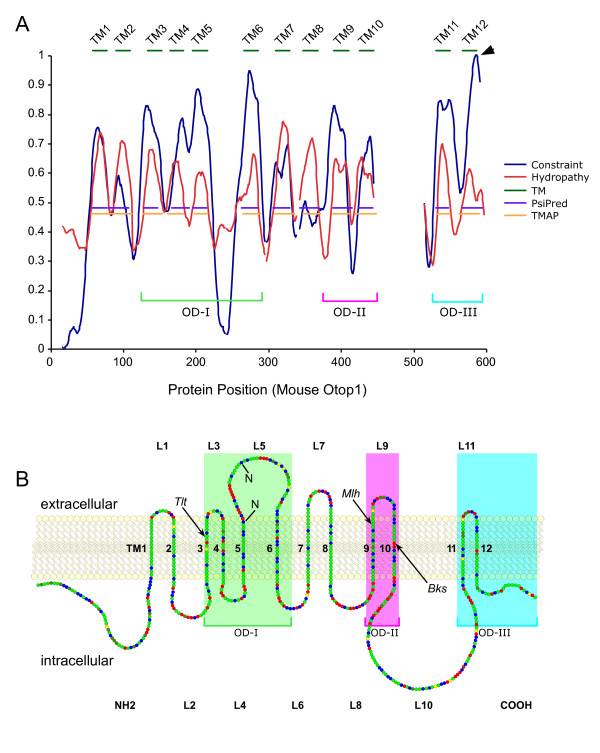 Scientists reported in the journal Science that they have discovered an entirely new class of ion channels. These channels let protons (H+ ions) into cells, are important in the inner ear for balance, and are present in the taste cells that respond to sour flavors.

Protons control whether a solution is acidic or basic. They set pH. Not surprisingly, protons do not cross cell membranes; they must be transported across the membrane through special proteins like ion channels.

This gene family was originally identified as important for balance: mice with mutations in otopetrin 1 (Otop1) are called tilted (tlt) because they cannot right themselves. The function of the encoded protein and why mutations in the gene cause a vestibular defect are unknown. But while studying taste perception, a research  group discovered that Otop1 encodes a proton channel, providing hints as to how otopetrin1 contributes to inner ear function and balance.

Because sour taste is the perception of acidic substances, which have a high concentration of protons, researchers predicted that sour taste cells have an ion channel that responds to or transports protons. Indeed, eight years ago, the lab used biophysical approaches to show that protons enter taste cells through a specialized proton channel in the cell membrane. The gene encoding this channel and the structural properties of the proton channel were unknown.

The lab used a molecular genetics technique called RNAseq to identify which genes were specifically expressed in sour taste cells and not other types of taste cells. They tested candidate genes one-by-one until he found one that produced a proton-conducting protein when introduced into cells that did not have any proton-conducting channels.

After testing more than three dozen candidates, they finally found it.  In addition to Otop1, there are two other related genes in vertebrates (Otop2 and Otop3), and this gene family is represented in the fruit fly Drosophila melanogaster. Otopetrins are structurally different from all other ion channels, and all of the otopetrins form proton channels, suggesting that these proton-conducting channels are evolutionarily conserved. Each of the otopetrins has a distinct distribution in many tissues, including the tongue, ear, eye, nerves, reproductive organs, and digestive tract.

In the vestibular system, Otop1 is necessary for the formation and function of structures called otoconia, which are calcium carbonate crystals that sense gravity and acceleration. The investigators speculate that the otopetrins maintain the pH appropriate for formation of otoconia and that the defect in the tlt mice is due to a dysregulation of pH.

In the taste system, otopetrins may be involved in sensing acids as part of sour taste perception. The function of these proton channels in other tissues is unknown.

"We never in a million years expected that the molecule that we were looking for in taste cells would also be found in the vestibular system," Liman said. "This highlights the power of basic or fundamental research."